Review: SECRET X-MEN #1 Allows a New Team to Rise to the Occasion

When the core X-Men are away, call in the Secret X-Men

What happened to the X-Men that didn’t get voted on to the brand new Krakoan X-Men team? This week’s Secret X-Men #1 answers that question for us. Tini Howard has the opportunity to write some wonderful characters who don’t get nearly as much spotlight as they deserve. Francesco Mobili handles the pencils while Jesus Aburtov adds the colors, and Clayton Cowles lays down the letters to round out the art team.

Tini Howard has been around the X-universe for a while now. She has written Excalibur since the beginning of the Krakoa era, and will be continuing that journey with Knights of X. For Secret X-Men, Howard focuses on Sunspot as he attempts to gather a team for a space adventure. Howard does a nice job of giving every member of the cast a chance to shine. Whether it’s Strong Guy wearing a funny get up or Marrow discovering she can use her bone powers as a spacesuit, Howard does utilize every member of the team. Howard also builds on the relationship between Sunspot and Deathbird as seen in previous X-Men books. Their relationship is tough, but they do respect one another. Howard shows this when Deathbird allows Sunspot to live instead of killing him for a suspected betrayal. Although each character has their moment, some of the dialogue is a bit clunky. Marrow specifically reads a little like Beavis and Butthead. Howard writes her several times with a “heh” before she speaks. Marrow’s tone comes off very childish and immature, which is inconsistent with how much she’s grown since Si Spurrier’s X-Force. 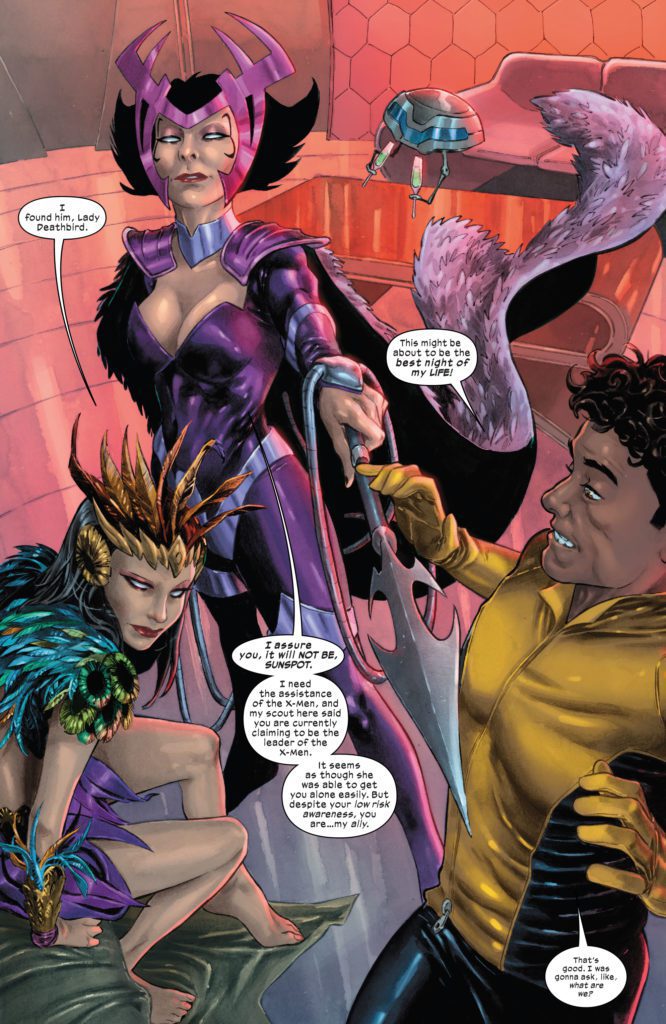 Francesco Mobili absolutely slays it on pencils this issue. Mobili gives us a gorgeous panel of the team recruited by Sunspot. The scale of Strong Guy as he hulks over all the other characters is impressive and really shows how big and strong he actually is. The action panels are easy on the eyes as everything is clear and the lines are crisp. Seeing Armor unleash her power in space as she fights aliens looks as good as it ever has with Mobili on pencils.

The colors by Jesus Aburtov leap off the page with his vibrant work. Aburtov uses warm colors like reds and orange when Cannonball or Sunspot use their gifts. Background colors fit the mood of the scene. When our heroes meet with Deathbird, the colors get significantly darker. As stated above, Armor using her powers in space allows Aburtov to use a pink that simply catches your eye. It’s almost as if you’re immediately drawn to the bright color laid down by Aburtov on every page.

The letters by Clayton Cowles are crucial for a story like this. Cowles is responsible for all the sound effects in the space battle. When several X-Men are fighting aliens, a big “BWWOOOOOOF” is scrolling across the panel. When Sunspot attacks, “BOOM” is shown after every blast he unleashes. As we read these sound effects, it feels like we’re experiencing them too. Cowles is a strong letterer who always enhances any issue he touches.

Secret X-Men is a decent one shot issue that allows lesser used characters to feel like the A-team. Tini Howard does a fine job of using her cast and showcasing how fun other characters in the X-Men rolodex can be when given the chance. Secret X-Men #1 is out now at your local comic shop!

This team comprised of underused characters gets a chance to show they have what it takes.Review: SECRET X-MEN #1 Allows a New Team to Rise to the Occasion