DC Comics’ Rorschach is complicated and subtle. It’s about politics, greed, purpose, and insanity. But every commentary the series is making is also deliberately muddied by the humanity of the characters. Writer Tom King, artist Jorge Fornes, colorist Dave Stewart and letterer Clayton Cowles aren’t dishing out life lessons in this finale. Rorschach #12 isn’t about answers. It’s about being lost and finding some kind of purpose, whether good or bad.

King doesn’t seem to have an overarching commentary in this series. There are themes of radicalization and the danger of conspiracies. But King’s conspiracy theorists aren’t the big bad guys. They’re dangerous, sure, but the people they’re fighting are just as awful. In Rorschach, everyone is evil. Everyone is lost. There is a subtle beauty to the work of Wil Myerson (Rorschach) and Laura Cummings (The Kid). They may have been insane and tried to assassinate a political candidate, but they lived like the heroes of the old west. Yet their lives were violent and tragic. They caused pain and misery, driving the people they met into insanity.

As King closes this series out, he doesn’t give us a better way of seeing these two. We see yet another person who has been deeply affected by their lives. We see him make decisions that are as heinous as they are inspiring. But it all ends with a smirk. King seems to joyfully leave us in the lurch. He wants us to muddle through and make our own conclusions. His script is robust and wordy, but incredibly stingy when providing information. King fills these pages with speeches, lines from movies, and small talk. We are drowned in a sea of words, but King never tells us what to think. It places us right in the shoes of our protagonist: a man who has to sort through a barrage of information to find real clues. It’s a frustratingly beautiful end to the series that feels truly fitting. 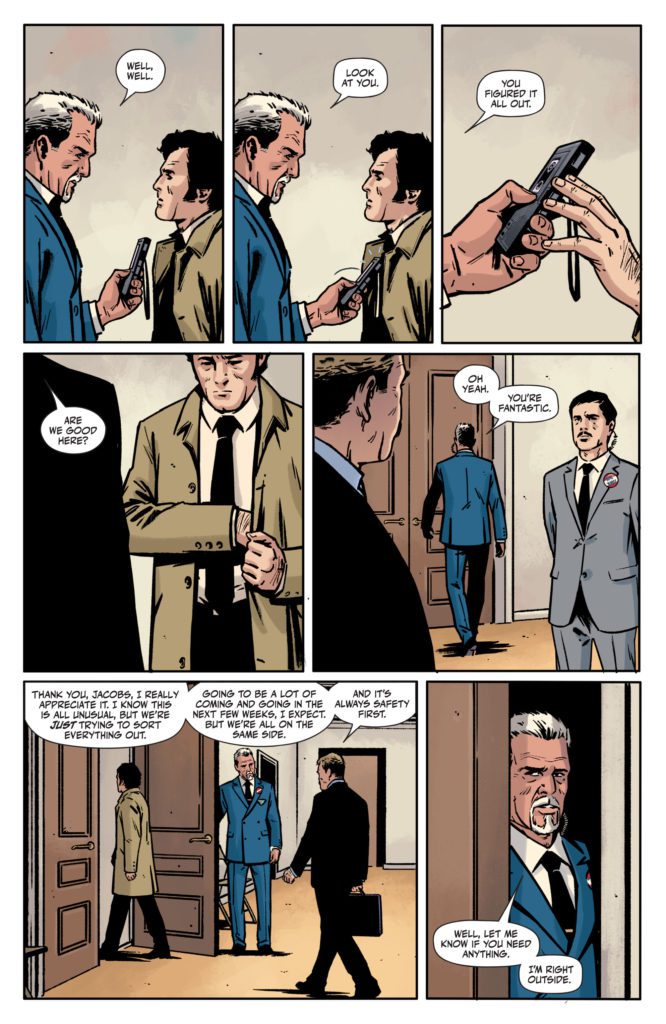 Fornes makes us feel as though we are seeing every moment. Characters move their arms or make different expressions from panel to panel, but rarely does the art move faster than that. We see our detective suit up in his coat and walk out the door. It takes an entire page. We see Turley inhale a cigarette and blow it out his nose. Fornes shows us time passing, but he does it slowly. By doing this, Fornes amps the tension up to 11. We know something is coming, we just don’t know what. Then, when the action of the issue has occurred, Fornes speeds things up. We see scenes from different angles, breezing from one location to the next. It’s the exhale after we’ve been holding our breath.

The inside of Turley’s office practically looks like an American flag. Whether it’s the dark blue sky out the window, or the red carpet and drapes, the whole place looks like July 4th. But it’s actually only the actual American flag and Turley’s tie that look bright. Every other red or blue looks a little muted. But Stewart still makes the whole scene feel lifeless. Even the bright colors of the tie and flag look artificial. It’s only after our protagonist has left the office that we see the warm color palette of the night air. It’s not in office buildings that our characters see beauty, but in the world outside. 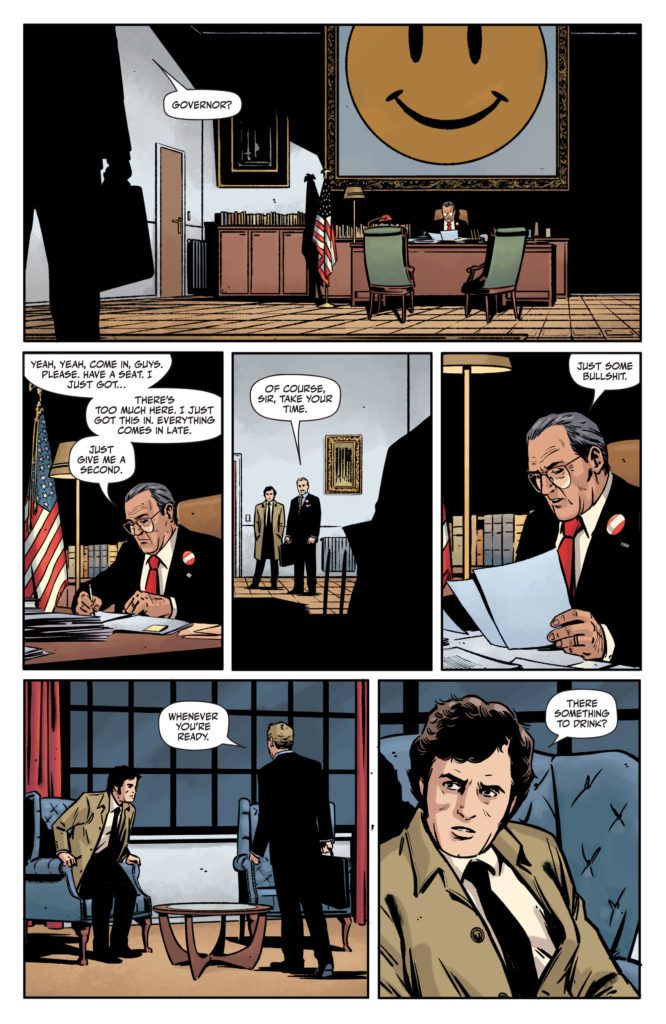 Cowles lettering ping pongs across the page. When Turley tries to look busy, it’s not his body that’s doing the movement, it’s his dialogue. His word balloon comes up on the left side of his face, then in the next panel it comes up on the right. Later, as we hear something happening off panel, Cowles uses height to tell us what kind of energy each piece of dialogue is colored by. The dialogue begins high on each panel, but by the end of the sequence the word balloons are at the bottom. We can see the situation deescalating, even if we can’t see what is happening.

DC Comics’ Rorschach is a series about terrorism, political greed, and the medium of comics. But this creative team doesn’t hold your hand through it or tell you what to think. They show you a story, and when it’s over they simply ask, “What do you see?” Rorschach #12 is out from DC Comics on the 14th of September at a comic shop near you. It is a brilliant and satisfying conclusion to this complex series.

DC Comics' RORSCHACH is a series about terrorism, political greed, and the medium of comics. But this creative team doesn't hold your hand through it or tell you what to think. They show you a story and when it's over they simply ask, "What do you see?" Review: RORSCHACH #12 - What Do You See?