Review: RONIN ISLAND #7 Asks, “How Should We Fight Oppression?”

Our two favorite samurai’s in training—Hana and Kenichi—reunite once again in RONIN ISLAND #7, available in stores Wednesday, October 9th. While Hana remained under the Shogun’s oppressive rule in his standing army, Kenichi managed to recruit a group of bandits to take on the imperial forces. Both want to end the overlord’s treachery, though their proposed methods couldn’t be more opposed.

The Shogun’s army of soldiers and subservient Byonin has grown more ruthless than ever. Aside from chaining up the zombie-like creatures to fuel their rage, he’s managed to keep them in such close proximity that they’ve effectively merged with one another, resulting in the creation of a singular beast capable of far more destruction. It is this monstrosity Hana and Kenichi must face following their short-lived reunion. 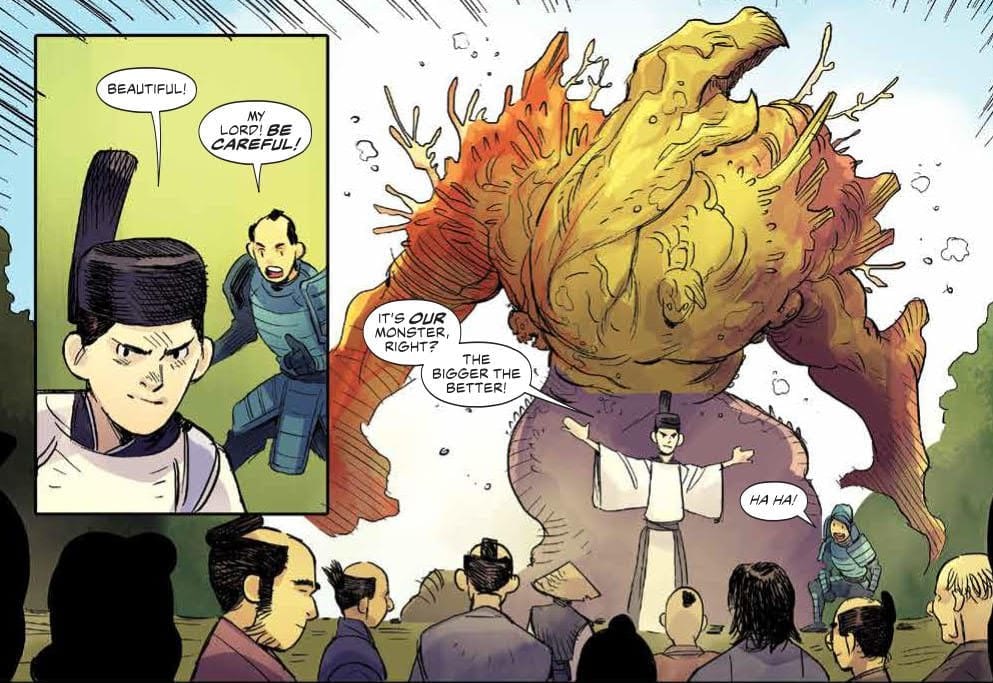 Readers get to sit back and watch Kenichi describe his plan to kill the Shogun with his army of murderous bandits, all for the good of Ronin Island. To this Hana can only stare in disbelief, soon experiencing a flashback to when the two companions were training on the Island as children. Their trainer during this time, Master Ito, showed them why fighting together was more important than simply seeking to destroy one’s enemies. And it’s this lesson Hana attempts to relay to her friend.

Over the course of this series, writer Greg Pak has been slowly unveiling the differences in Hana and Kenichi’s ideologies—features stemming from their past experiences—and they’re highlighted more than ever before in RONIN ISLAND #7. Hana’s desire to bring more people under her protection via compassion stands in stark contrast with Kenichi’s willingness to use nefarious means in order to protect his “own.” But in a surprising twist, Pak blends these two philosophies into one in the story’s final scenes, leaving readers to sort out the moral questions on their own.

Giannis Milonogiannis and Irma Kniivila’s talents prove once again that they’re perfectly fitted for this series. The contrasts between the surrounding forests and the walking death of the Byonin plays on the narrative’s dichotomic themes. The putrid reds, oranges, and yellows stand out like a sore thumb throughout the landscapes and the people themselves.

Simon Bowland’s lettering adds to the Byonin’s distinctive features as well, primarily through his use of a large red font to show both its anger and almost otherworldly qualities; only a unique creature could utter the horrific sounds represented by the text.

Milonogiannis and Msassyk’s artwork for the main cover depicts a blood-stained path that appears to be leading to the Island, adding immense foreboding based on the danger the Shogun and his Byonin pose.

Ethan Young’s preorder cover illustration is once again crafted using East Asian stylistic elements. It features younger versions of Hana and Kenichi playing in their homeland, reminding the reader of their shared past.

Takeshi Miyazawa and Raúl Angulo’s variant cover contrasts Hana and her fellow soldier with an encroaching horde of Byonin. The warriors’ unity stands out with bright, diverse colors while the Byonin fade into the dull, orange background.

RONIN ISLAND #7 is a major turning point in this series in that it brings Hana and Kenichi’s differences to a head. The fate of the island will ultimately depend upon where the two heroes go from here.

Did you agree with Hana’s declaration that Ronin Island wasn’t, in reality, an actual place? Let us know what you think in the comments below!

Review: RONIN ISLAND #7 Asks, "How Should We Fight Oppression?"Writer Greg Pak has been slowly unveiling the differences in Hana and Kenichi's ideologies—features stemming from their past experiences—over the course of this series, and they're highlighted more than ever before in RONIN ISLAND #7.