Review: RONIN ISLAND #10 And The Art Of Loving One’s Enemy

RONIN ISLAND #10, available in comic book stores on Wednesday, February 12th, comes full circle in a certain sense, bringing Hana and Kenichi back to the Island from which they came all those months ago. But all is not the same—Hana and Kenichi are full-fledged warriors now, capable of both leading fighters and mounting an effective defense for their homeland. Let’s hope they’re able to rally enough support to fend off the Shogun’s army of Byonin.

Hana and Kenichi have their work cut out for them in terms of rallying support. Readers witnessed the crushing disappointment last issue when Elder Jinn refused to let the two samurais and their band of Shogun deserters onto the island, all because of fear of the outside. Though it was heart-breaking, one could almost sympathize with the Elder’s predicament—is it morally justifiable to let in a group of people and risk them spreading the Byonin disease to her people? But the reader will immediately jump to the next consideration: Is it morally right to bar refugees from the Island because of the harm they might cause?

Now Hana and Kenichi find themselves face-to-face with the Shogun’s forces once again, and they’ve decided to fend them off (despite being shunned by the Island). And what a fight they bring. However, Kenichi realizes Hana has been attempting to care for the wounded enemy soldiers after incapacitating them, something akin to treason in the young warrior’s mind. He claims war requires them to engage in harsh tactics, but Hana believes in upholding the Island’s main motto: “Together in strength.” However, this proves difficult, as her comrades remind her that even the Island itself couldn’t embody this principle. 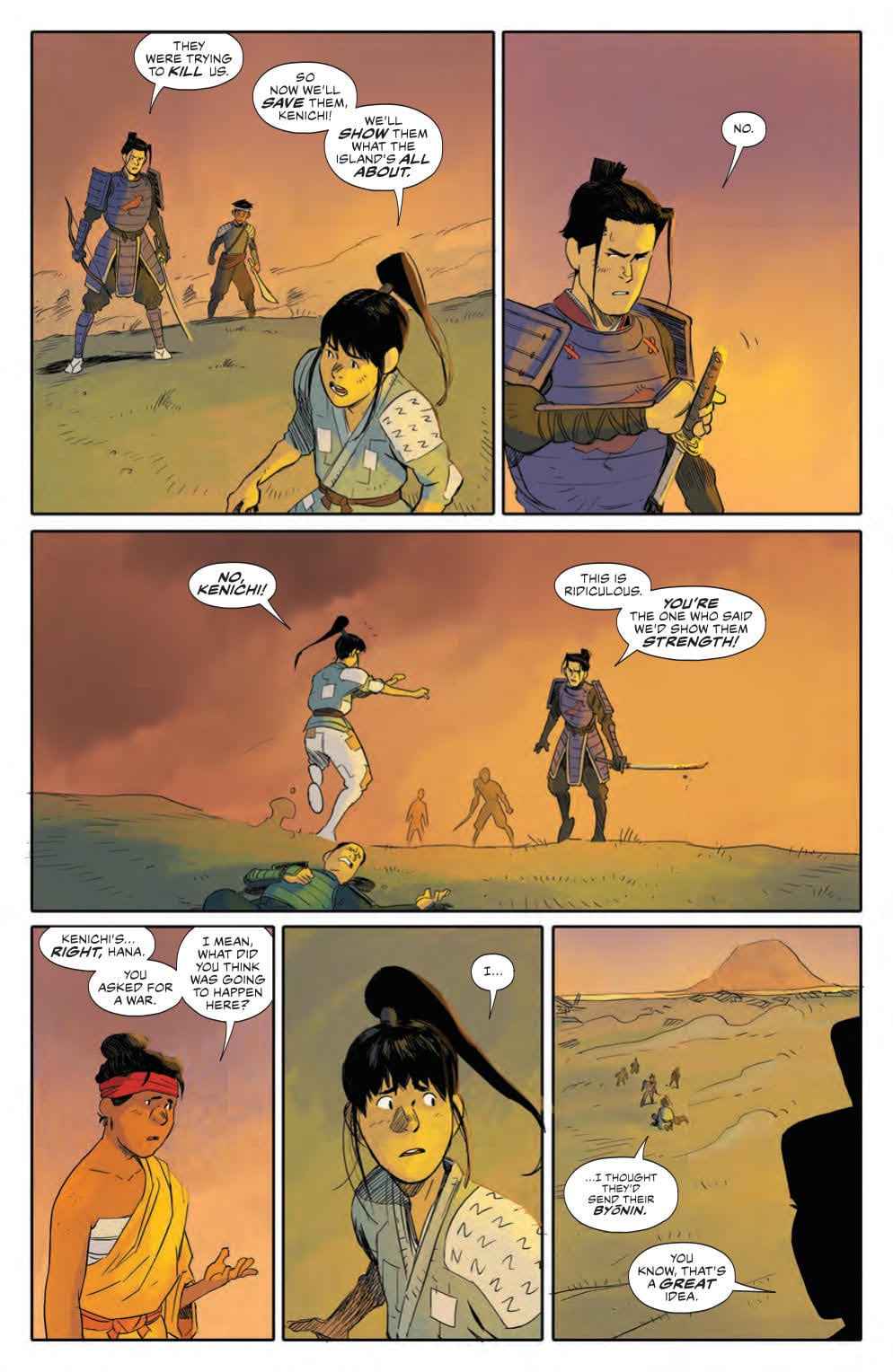 However, at that exact moment, Jin arrives on the scene just in time to save Hana. And she commands her soldiers to care for the wounded in Shogun’s army. It seems that the ideals of the Island haven’t left her after all. 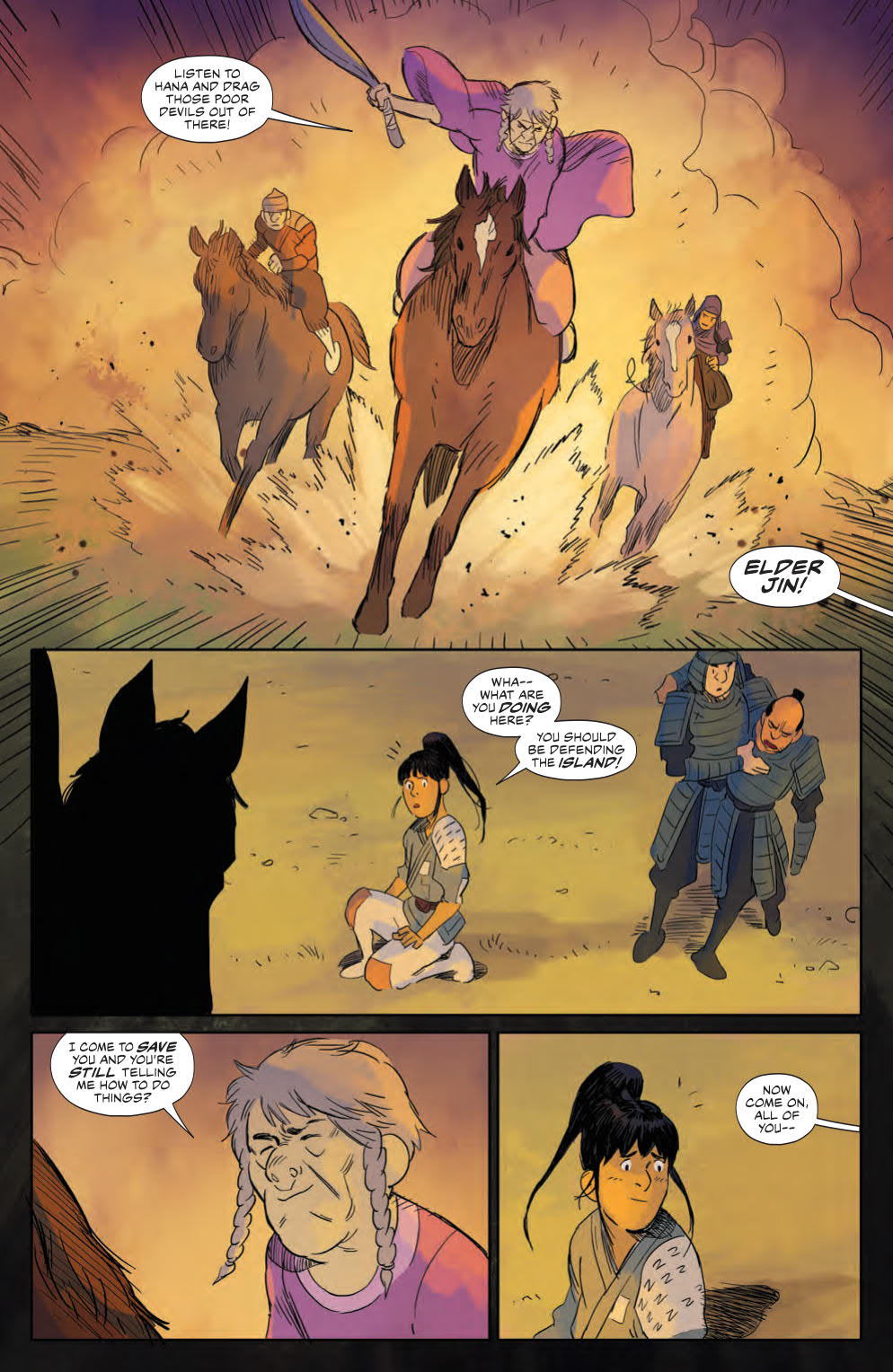 Greg Pak’s storytelling ability shows its true colors in this installment. He expresses the complexities of morality both in Jin’s fear and ultimate courage to hold fast to the ideals of compassion and togetherness. Readers see what it looks like when this principle is taken a step further by embracing enemy combatants.

Giannis Milonogiannis’s penciling and ink work, Irma Kniivila’s coloring, and Simon Bowland’s lettering play well together once again in RONIN ISLAND #10; one could place the art from all ten issues side by side and find each piece fit harmoniously with the rest. The panels full of action, effective shading, and variance in font styles keep readers on the edge of their seats.

Milonogiannis and Msassyk’s main cover artwork features a formidable Jin standing atop a wall surrounding their village on the Island. We see her battle-ready stance, but is she willing to let anyone through who might pose a threat?

Ethan Young’s preorder cover uses a monochromatic palette and depicts a horrific look at the Byonin, showing their true power.

RONIN ISLAND #10 is an action-packed story full of heart and suspense. We’re excited to see what happens next in this saga!

Do you think the Island will be strong enough to defeat the encroaching army now that Hana and Kenichi are back? Let us know in the comments below!

Review: RONIN ISLAND #10 And The Art Of Loving One’s EnemyRONIN ISLAND #10 is an action-packed story full of heart and suspense. We're excited to see what happens next in this saga!