The best horror is most effective when it focuses its energies on the stories of the characters and victims within the story first, and the scares second. This is why Redfork, a 6-issue mini-series from writer Alex Paknadel and artist Nil Vendrell and published by TKO Studios, is one of the most frightening and outstanding horror comics published in recent memory. This is a comic that empathizes with the near-inescapable living nightmare of people living in poverty conditions and forced by higher forces both societal and, in here at least, supernatural, to give up their very bodies to just be able to survive. With colors by Giulia Brusco and letters from Ryan Ferrier, Redfork is a story about the lives of people just trying to get by, all while being seduced and betrayed by powers that could care less.

“Ex-con Noah McGlade returns to his coal-mining hometown to find it blighted by opioid abuse and economic decline. But there’s something even darker draining the very life from this town, and as Noah digs deeper he unearths a dormant horror that threatens to consume what little he has left to live for.” 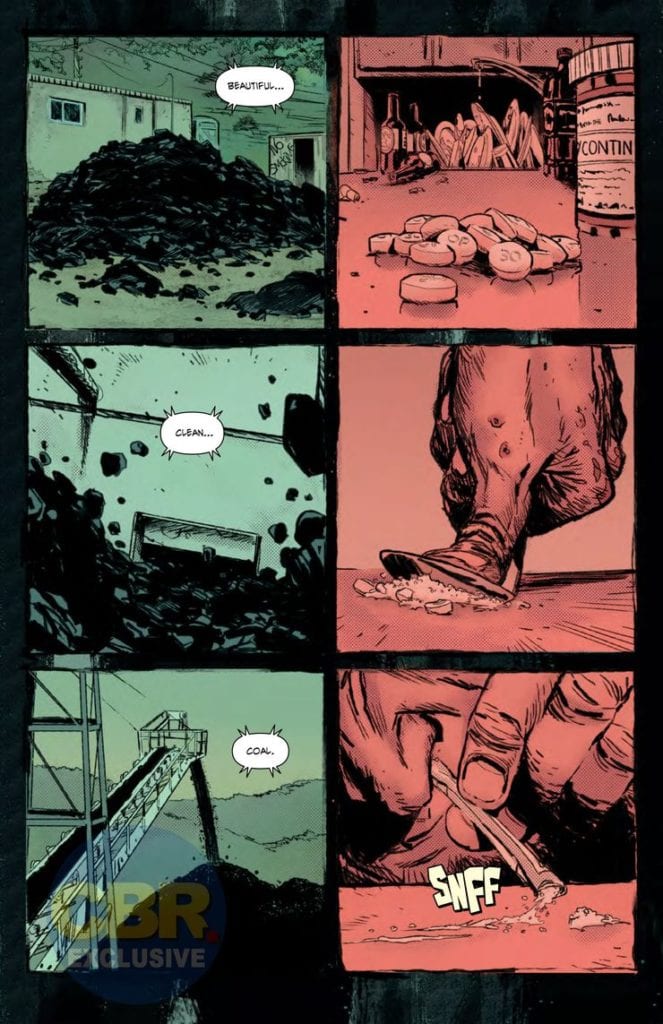 While writer Alex Paknadel does craft a seriously frightening supernatural horror experience with Redfork, the reason it turns out to be so effective is because of the attention paid to the human characters within the story. Noah’s introduction makes him the sort of person your average member of society would avoid or scorn; he’s a convict with a past inclination for violence and drug abuse. Hell, almost everyone in the town of Redfork is stuck to some harmful vice that allows them to temporarily escape the pain of having no money and no way out. Paknadel does an incredible job of writing a town full of people with no hope that are just trying to get by. They are all written with sympathy, and not the sneer of superiority that many would cast upon these people if they passed them in the street. This is a book that is very aware not only of the torment of cyclical poverty but also of the very people that take advantage of those who have no means of surviving without those who prey upon their labor. Mining is one of the most dangerous and parasitic professions in the history of industry, sending hundreds of people to their deaths with little more than a shrug in response from their employers. Paknadell does not shy away from the cruel indifference shown by the wealthy company owner of the Redfork mine, and her ability to see the people in this town as little more than means to an end.

The very reality that Redfork represents is already its own brand of horror by itself. This is why fact that the comic’s supernatural element is so unnerving is also so impressive. There are two villains in this story, an earthly one and an unnatural one. Both of them torment the population of Redfork in different ways; the first keeps them in the only lifestyle they can afford to know while barely hiding her disdain for them, while the second offers them miraculous wonders and appears to actively care for them as human beings. Before they’ve realized it however, their lives are torn asunder by something they could scarcely understand. This sort of meta-commentary makes what was already a politically-charged horror and turns it into one of the most effective political metaphors I’ve ever seen in a comic. The commentary on our own political system never comes off as preachy, rather like a poetic series of interpretable observations from the characters in the story. The presentation of the story itself is delivered with piano wire-like tension and impeccable pacing, keeping the reader strung along with a combination of fantastic character writing and an increasingly eerie tale of terror. This script is a tasty gore-soaked casserole of body-horror, character-drama, and societal commentary all delivered with a skill seldom seen in any medium. 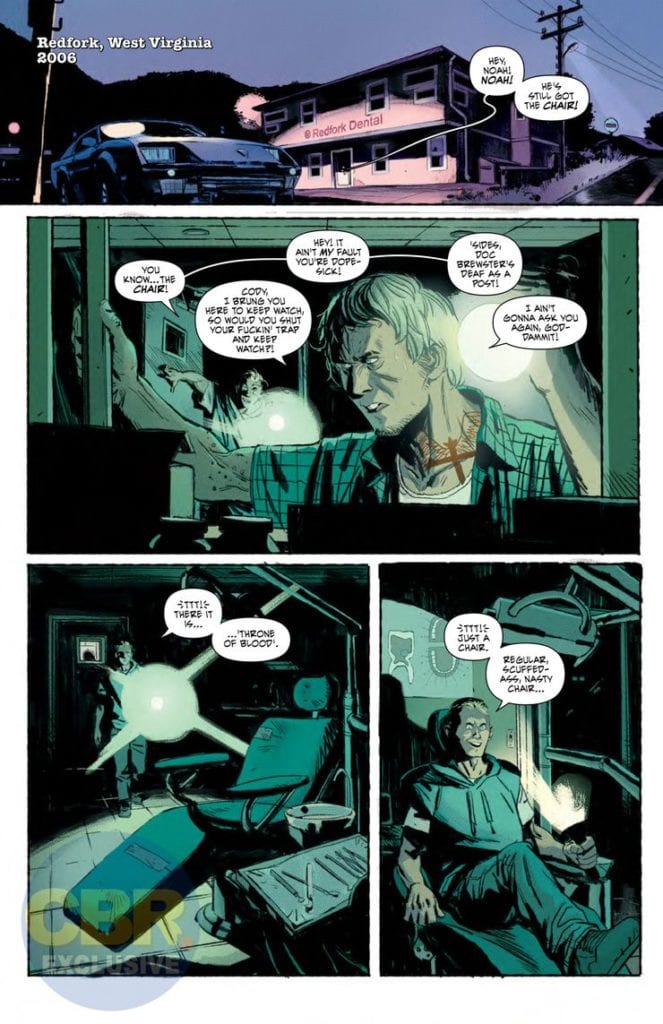 Carrying the tension and atmosphere of Redfork is the stellar visual approach of artist Nil Vendrell. He, along with colorist Giulia Brusco, craft a visual storytelling experience that drops bloody breadcrumbs of horror while maintaining a simultaneous focus on the plight of the people living in Redfork. Vendrell continually builds curiosity and tension from page to page by showing only small glimpses and flashes of the growing threat in this small forgotten town, presenting the major scares like the best classic horror films. Vendrell understands the need to create a focus on the cast of people and their condition just as well as Paknadel does, and so just as much effort foes into the directing and panel layouts of Noah’s experiences with the other people in his hometown. There’s a visual sense of alienation and bleak hopelessness that is telegraphed in the framing of characters, and this effect rolls right into the direction of the horror atmosphere when the scary stuff starts dropping. The phenomenal pacing in this story pays off in a huge way with the late-stage reveals after so much meticulous plotting. A common issue among horror stories is that once the big bad is revealed all the tension sot of fizzles out. Luckily that’s not so with Redfork; this story stays intense and frightening from start to finish.

Giulia Brusco creates a hazy, coal dust-covered color experience for this comic that oozes with an unnerving atmosphere. There’s a constant darkness in every panel as if the color palette was tossed down a mineshaft and brought back up for use. These dark and drab tones are so prevalent that the sudden bits of fleshy gore and otherworldly lights punctuate the pages with shock and urgency. There’s a rather symbolic use of daylight and nighttime in here as well, but getting into that would be getting into some spoiler territory. The letters from Ryan Ferrier use a sharp, angular font that I’ve noticed becoming more common in horror comics. It’s a great choice that is well-executed, with Ferrier using tonal changes and effects that stay in the speech balloons rather than taking up space within the panel. The visual work on this horror story is a spectacular display of atmospheric and character-oriented storytelling. 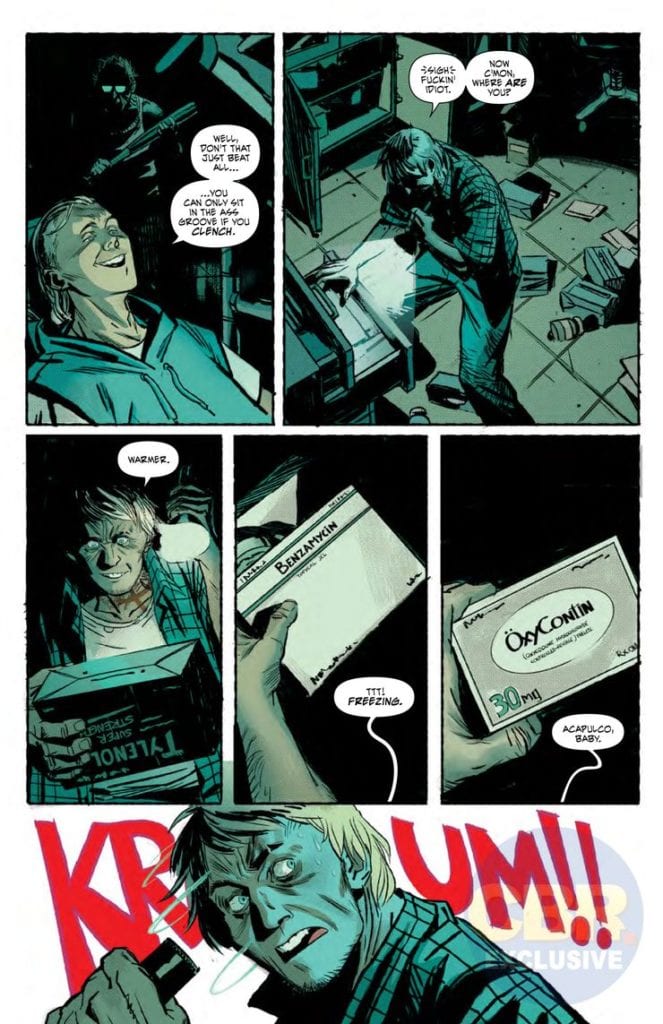 Redfork is one of the most effective comics I’ve read this year. Not only is it a superb horror story, but it’s a thoughtful and empathetic examination of the lives of the impoverished working class and how they are taken advantage of by predators both supernatural and very real. Alex Paknadel constructs his most brilliant script yet, weaving a terrifying and intimate tale of terror and woe. The art of penciller Nil Vendril and colorist Giulia Brusco composes a blackened environment that sets the story’s taut pacing while offering stellar character-focused visual narrative-work. Redfork is without a doubt one of the best horror comics I’ve gotten to read, so please head over to TKO Studios and grab yourself a copy.

A genuinely unnerving horror comic that keeps its hand on the pulse of class exploitation and the abysmal status of impoverished mining communities.Review: REDFORK & The Horror Brought To Impoverished Hills