Red Sonja #6 is a pivotal issue in writer Mark Russell’s run on the series. He manages to round out the first arc of the story on a narrative high point, though, delivering a satisfying close while still heightening anticipation for what will come next.

Dragan makes Sonja an offer that would solve all her problems at once. She could spare Hyrkania and rescue her cousin. She knows she can’t trust Dragan, of course. That said, she’s running out of time and options to save her country, and her last remaining family.

One of Russell’s greatest strengths thus far is his ability to balance narrative elements. He provides action and political intrigue in excellent proportion to one another. Flashback sequences are used to develop characters and expand on the themes present in the issue. It’s a great demonstration of the author’s keen sense of dynamism.

There’s little action in Red Sonja #6, but the book is thrilling and engaging nonetheless. Sonja spends the issue uncertain about which course of action to take. By the book’s end, though, the reader gets the sense of Sonja’s resolve in her decision. The book works extremely well as a closer to the series’ first arc.

The only significant ding against Red Sonja #6 comes toward the book’s end, where we see the death of one of our established characters. The death is motivated and dramatic, though it’s awkward in context of the narrative. We’ve spent time establishing the character, and building to this individual playing a significant role in the story, only to see the person die. At least we can say that the incident does, in turn, motivate Sonja’s next steps, though.

Despite that loss, the book remains consistently entertaining, with clear and present stakes for Sonja. Overall, it’s the same strong writing we’ve come to expect of Russell’s story thus far. 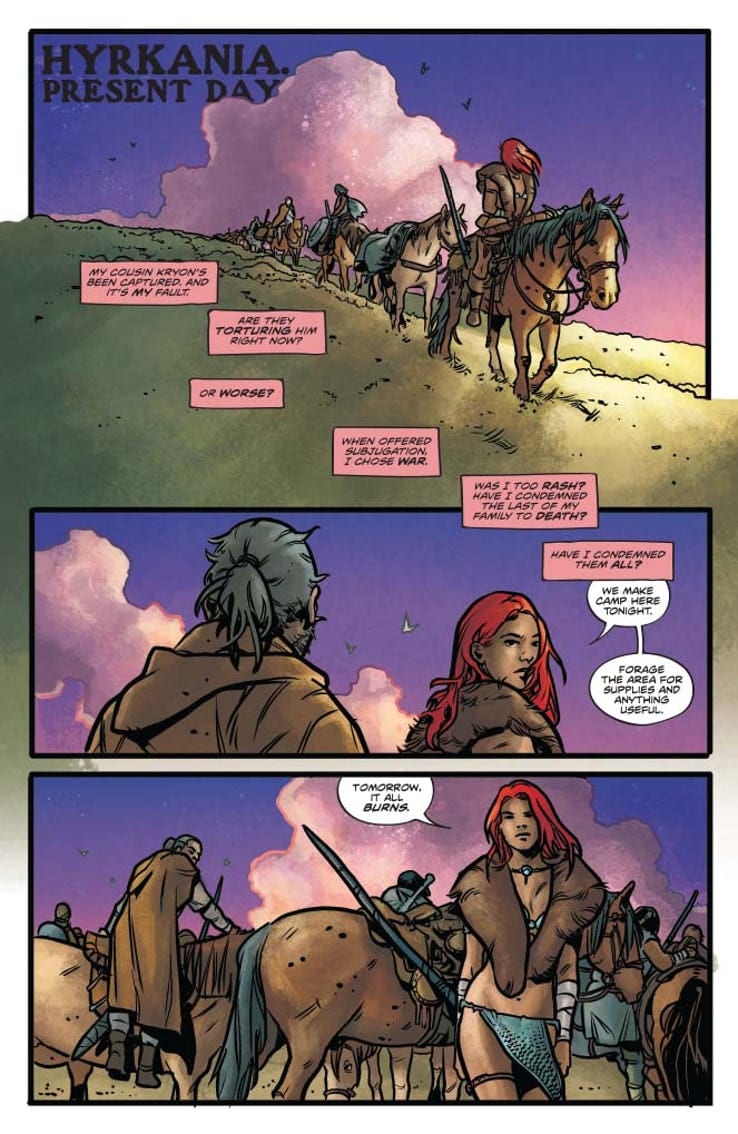 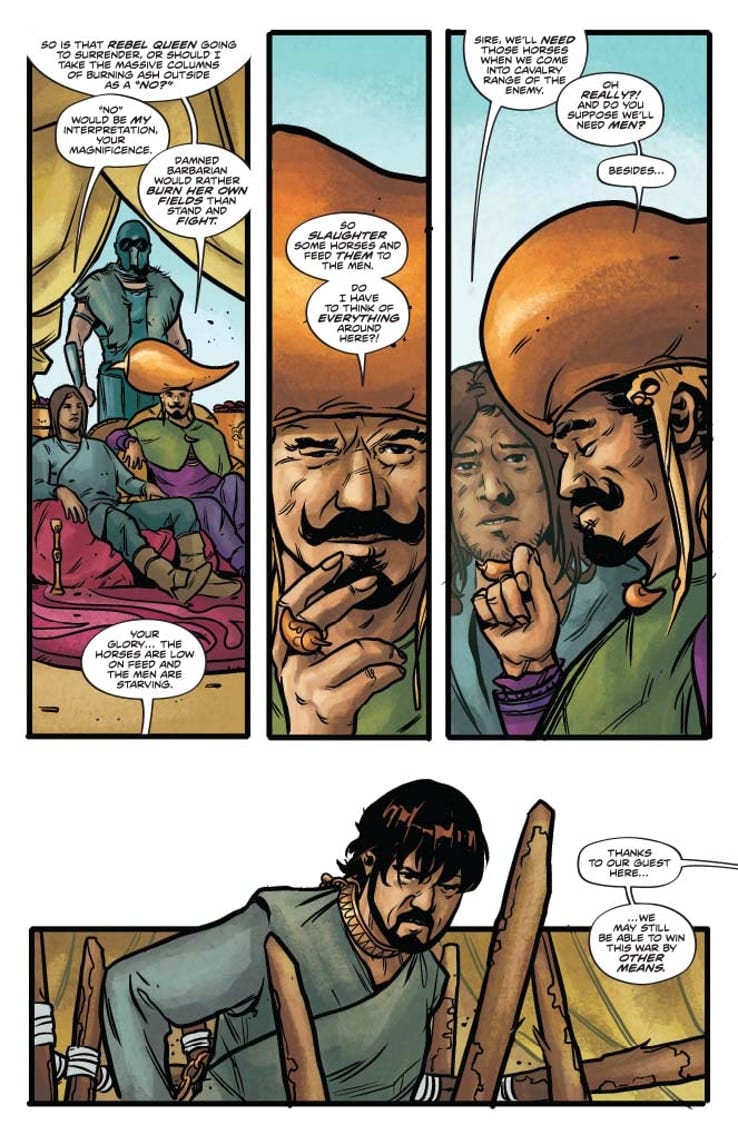 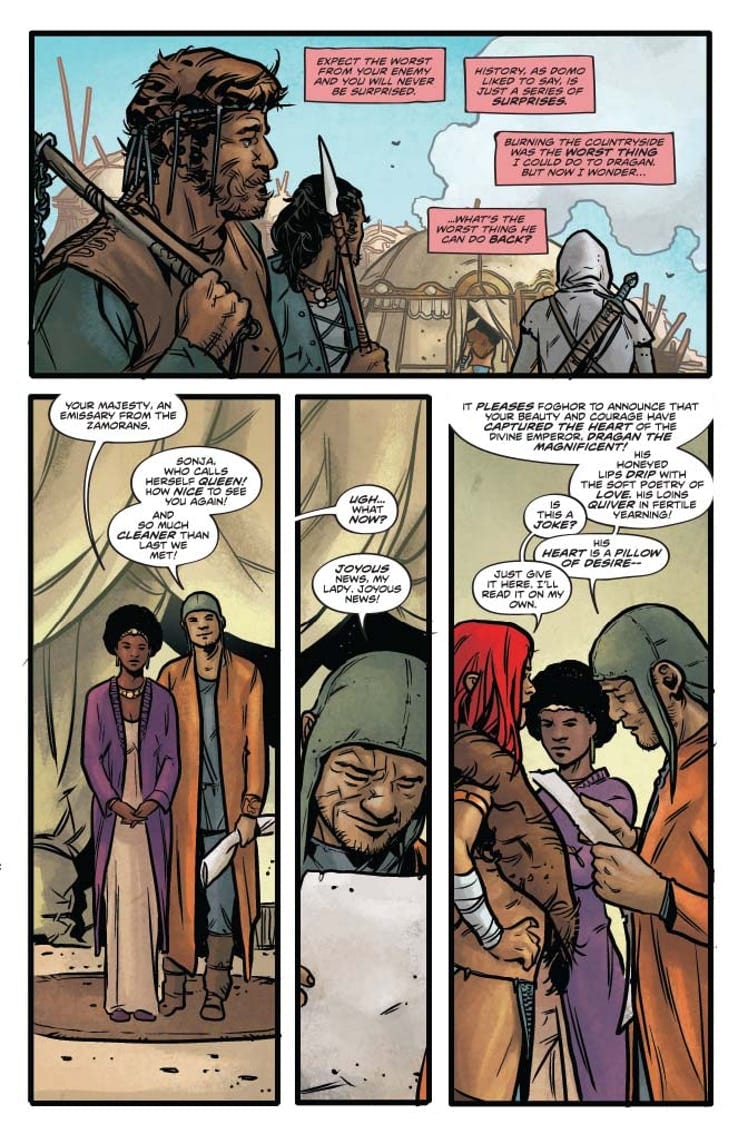 Given that Bob Q takes over art duties beginning with our next issue, Red Sonja #6 is a decent, but not inspiring sendoff for artist Mirko Colak.

This issue isn’t as action-oriented as previous books in the series. As such, Colak doesn’t have as much opportunity to showcase many of the impressive action sequences that make his work on the title stand out. He attempts to inject some dynamism into the visuals by altering the perspective from one panel to the next. However, sequences of extended dialogue come across as stiff from a visual standpoint.

The work in Red Sonja #6 is very meat and potatoes. It’s strong from a craft perspective, but not Kolak’s most impressive outing.

The colors provided by Dearbhla Kelly end up carrying more of the weight than the line work. The colors are detailed, showing a great deal of texture. We can read the shadows on the faces of characters and on objects, really grounding the reader in this world.

If you’ve enjoyed Russell’s run thus far, Red Sonja #6 certainly doesn’t disappoint. Very excited to see where the story is headed in the next arc beginning in August.

RED SONJA #6 swaps action for heightened political intrigue, providing another enjoyable chapter to close the first arc in Mark Russell's run. Mirko Colak's art doesn't get as much opportunity to shine as in previous issues, but strong storytelling more than makes up for it.Review: Dragan Makes a Modest Proposal in RED SONJA #6