Review: The Tides of War are Turning in RED SONJA #11

It’s true: Dragan may have taken Hyrkania. However, Sonja and her remaining band of allies have one last, desperate trick up their sleeve in Red Sonja #11, out this week from Dynamite Entertainment.

Hyrkania is a vast grasslands separated from the rest of the Zamoran Empire by the Vilayet Sea. The only safe passage for Dragan’s forces: a single bridge, which is now under control of Sonja’s forces. This issue sets up a climactic showdown between the emperor and the rebel queen to close out the second arc of writer Mark Russel’s story. 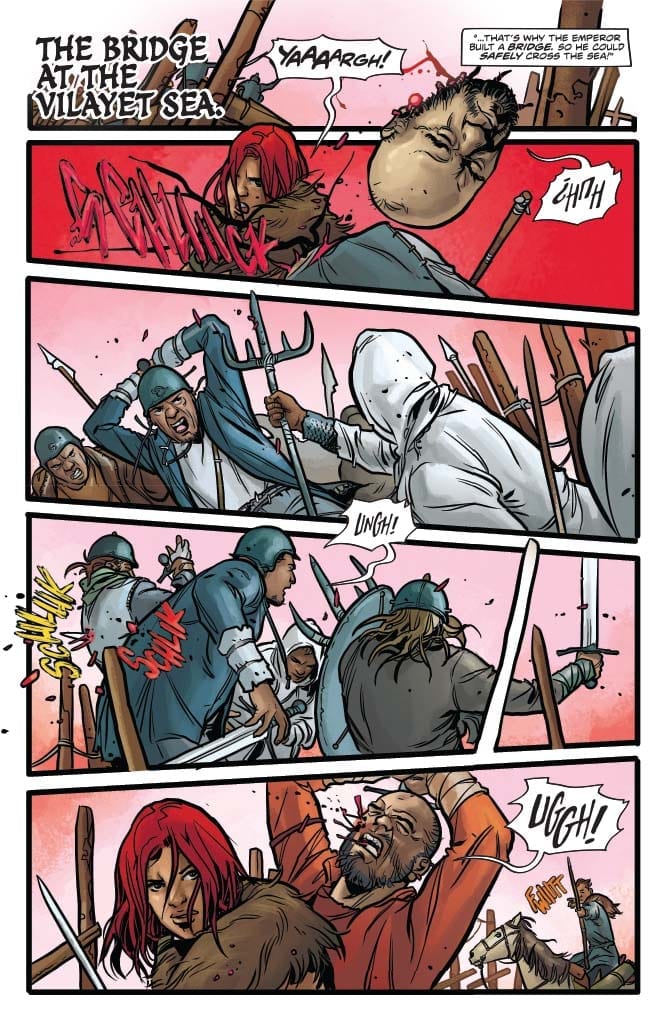 Russell continues to weave a complex and very dynamic narrative here. The storytelling in Red Sonja #11 clearly foreshadows several coming reversals of fate for our protagonist, as well as for Dragan. Both lay plans, but we readers see factors that threaten to undermine them.

The issue offers plenty of intrigue, but in terms of action, it primarily follows the characters planning and strategizing. It feels like this issue is setting up several major turns as the story culminates in our next issue. As a result, this book is not quite as engaging in isolation as previous chapters. This is natural in sequential storytelling, as some issues will need to serve primarily to setup subsequent events.

Another minor sticking point, though, is there are a number of typos sprinkled throughout the book. For instance, Prince Cyril refers to the Vilayet Sea as the “Vilayet Se,” while Sonja at one point describes gears that “can only greased” rather than ones that “can only be greased.” While it’s not a major problem, it does suggest a lack of attention to detail.

Overall, the writing in Red Sonja #11 is good, but not a high point for the series. One of Russell’s greatest strengths is generally how he balances story elements. He’s very skilled and weaving humor and drama, and action and exposition, with no resulting tonal clash. We don’t get as much of that here; it can be forgiven, though, because it feel like this chapter sets up something great right around the corner. 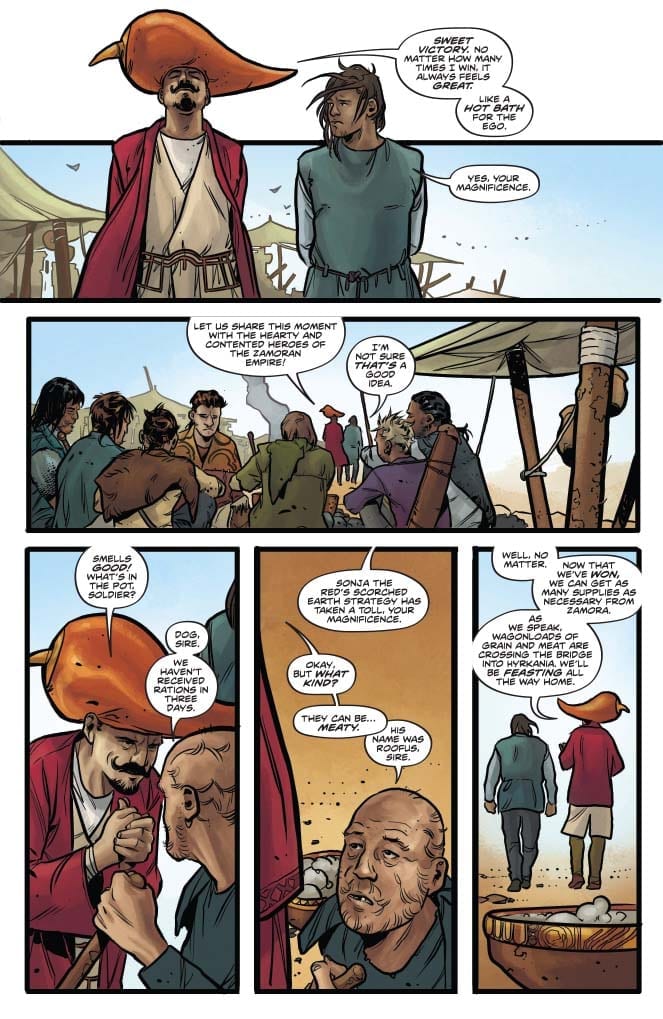 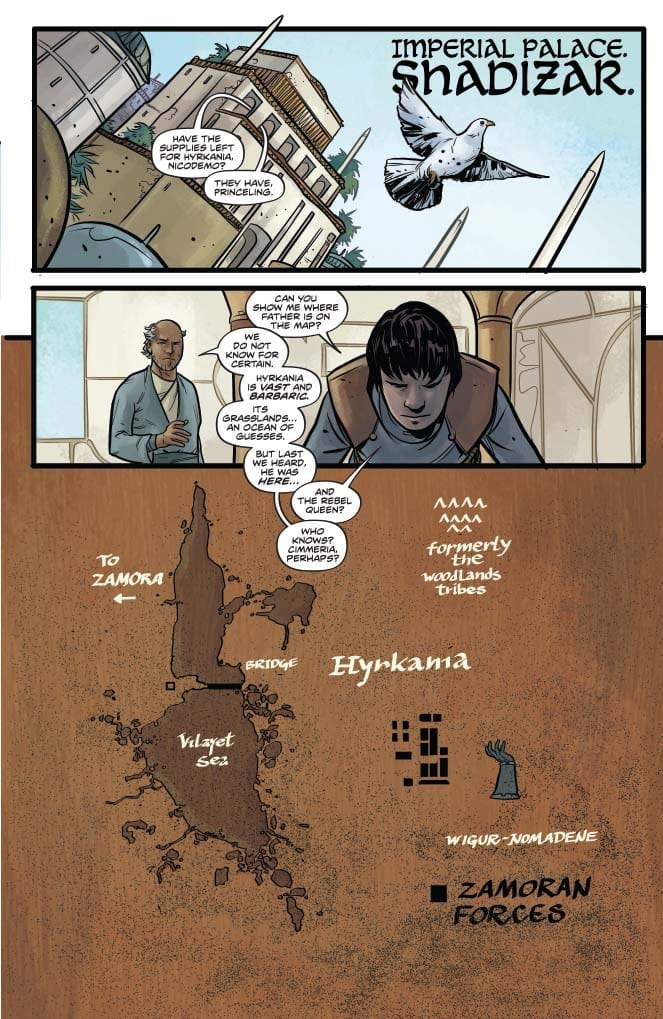 In the past, one observation I’ve made on multiple occasions is that artist Mirko Colak’s figures are not always particularly expressive. They can sometimes feel rather static and lifeless; here, though, we see much more notably-animated and expressive character designs, which helps deepen the immersion in the story.

Colak provides solid artwork overall for Red Sonja #11. In addition to the livelier figure illustrations, he still hits the story beats effectively, dividing pages into varied, yet clean and focused sequences. It’s a meat-and-potatoes approach, but it works well alongside the writing.

The only major sticking point is that, despite more nuance in the characters, the backgrounds throughout seem to fall off the priority list. We don’t see much interesting use of scenery; instead, we see characters tending to find themselves floating in voids, without any evident motivation based on the dramatic tone of the scene.

Colorist Dearbhla Kelly offers more of the soft, yet vibrant colors that have become a defining characteristic of the book’s aesthetic. While not overly adventurous in this issue, it will be exciting to see what she brings to the table with the climax of this arc. 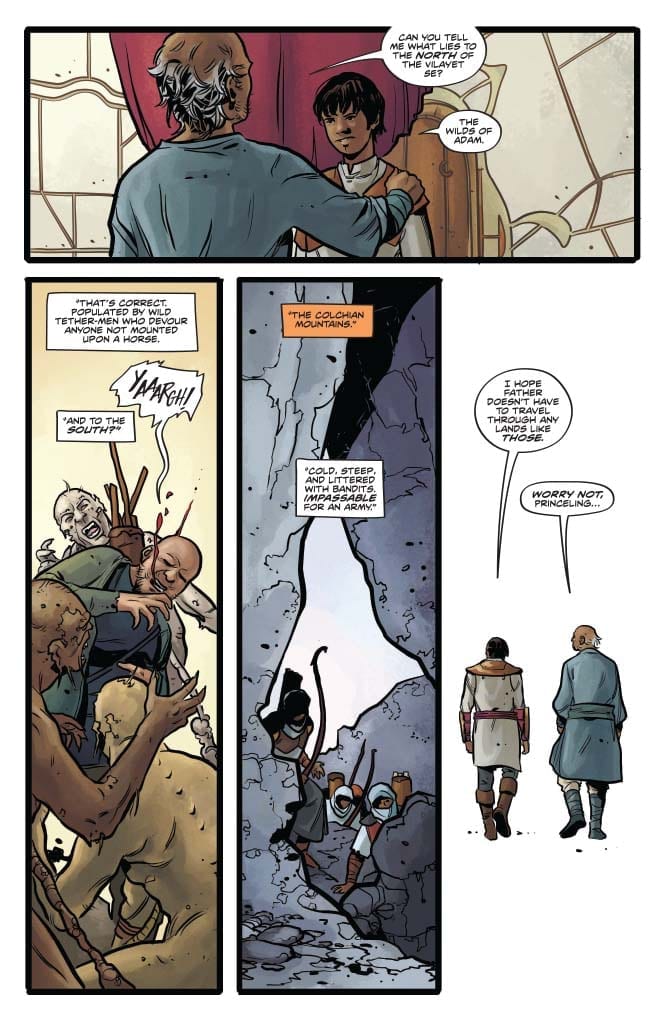 Red Sonja #11 is a respectable entry in Ruussell’s narrative. It’s not the most thrilling on its own, but it ratchets up the tension and sets up for what may a fantastic payoff in our next book.

With her back against the wall, Sonja stakes everything on a last stand at the bridge across the sea. RED SONJA #11 isn't the most thrilling read, despite offering plenty of intrigue. However, it sets us up for what promises to be a climactic showdown in the finale of this arc of the story.Review: The Tides of War are Turning in RED SONJA #11