Review: RECKLESS: FRIEND OF THE DEVIL and Having No Home

Welcome back to the world of Reckless. Writer Ed Brubaker, artist and letterer Sean Phillips, and colorist Jacob Phillips’ second installment in their Reckless series, Friend of the Devil, is as fantastic as their first.

Brubaker didn’t have a home growing up. Well, he did. But his afterword in this graphic novel describes his upbringing as a little different from most people’s. He was a military brat, which meant he wasn’t in one place for very long. Growing up all over the world can make you feel all sorts of ways. You can feel like you don’t have a home, because you’ve never been anywhere long enough to really connect to it. Sometimes, people look at you and think you’re just the same as them. You look like them, you must be like them. But under the skin, you feel totally different. Other times, you might live somewhere where you stick out like a sore thumb. But beneath it all, whether you look like you’re from that place or not, it’s the closest thing you have to a home.

Brubaker shows us both of these extremes in Friend of the Devil. Ethan Reckless looks just like everybody else, but he isn’t even at home in his own skin, let alone his time or place. Linh, the woman Reckless meets in this chapter, is a Vietnamese immigrant. Reckless assumes a couple things about how she would have felt growing up in America. But it turns out he’s wrong, she feels connected to where she lives. She’s as American as anyone else. Brubaker sets Reckless’ narrations in the future. It’s Ethan looking back on events. It makes him feel disconnected from the now, dreaming of the past just like he’s doing in his own narration. And Linh avoids talking about her past at all. Her identity is a touchy subject. It’s with this simple narrative distancing and omissions of backstory that Brubaker helps us to see the DNA of these characters. 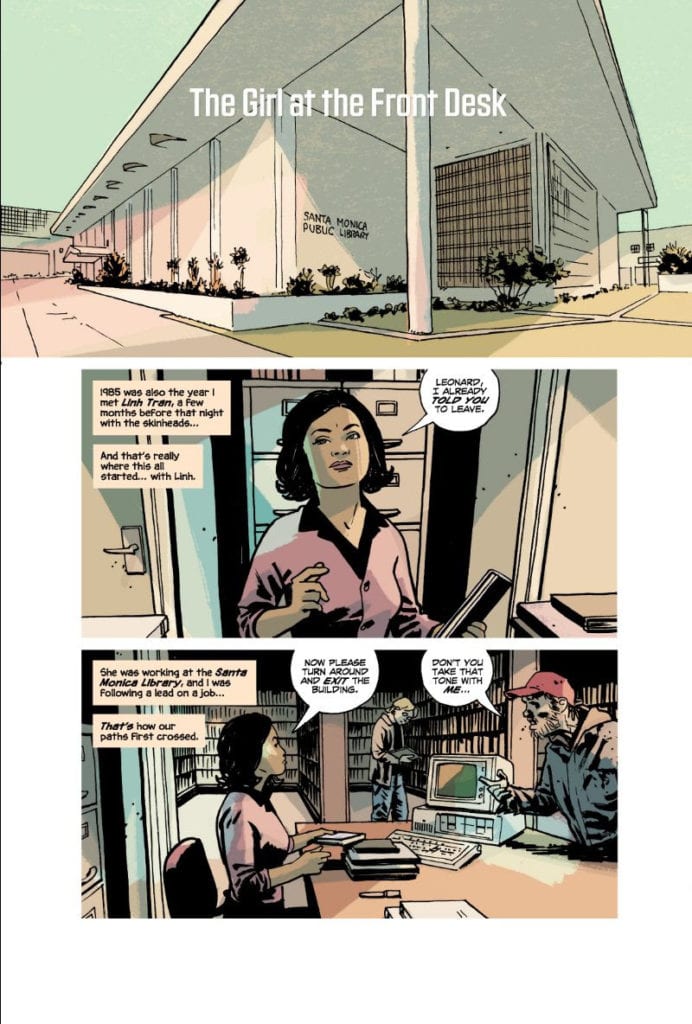 Sean Phillips pulls back on the details of a lot of his settings. He focuses us in on the characters and the action, the driving forces of the plot. Even some of the more detailed background have a sense of repetition to them: booths in a diner, chairs in a theatre. But all the settings that feel particularly detailed are nostalgic. At one point, Reckless is shown into a room with a bunch of old movie reels. We can see details on the posters, the rows and rows of reels, each individually drawn. When Reckless interviews someone and they talk about an old cult, we see the 70’s in all of its glory. People crowd the sidewalks, the writing on flyers being handed out is visible, and you can see cars driving through the streets. Phillips shows us how Reckless feels more welcomed in the past than in the present.

This whole graphic novel is mostly colored in blues, yellows and pinks. Jacob Phillips uses yellow to show the bright days in LA. But it also washes everything out a little. The sun gives everything a similar hue. At night, the scenes look intoxicating and bright blue. Phillips connects us to Reckless’ loneliness in a way that feels frighteningly comfortable. It’s as though this blue feeling that Reckless gets at night is familiar. He’s lived his life alone, this is how he operates. When Reckless and Linh go for nighttime strolls on the beach, we see how at home she is in his blueness. Their melancholy is complementary. Phillips also shows us scenes of the 70’s in bright, neon pink. Phillips’ coloring makes everything feel like one big drug trip. We can sense Reckless’ longing for those times in how he envisions those days, even if he seems rather stoic at the moment. 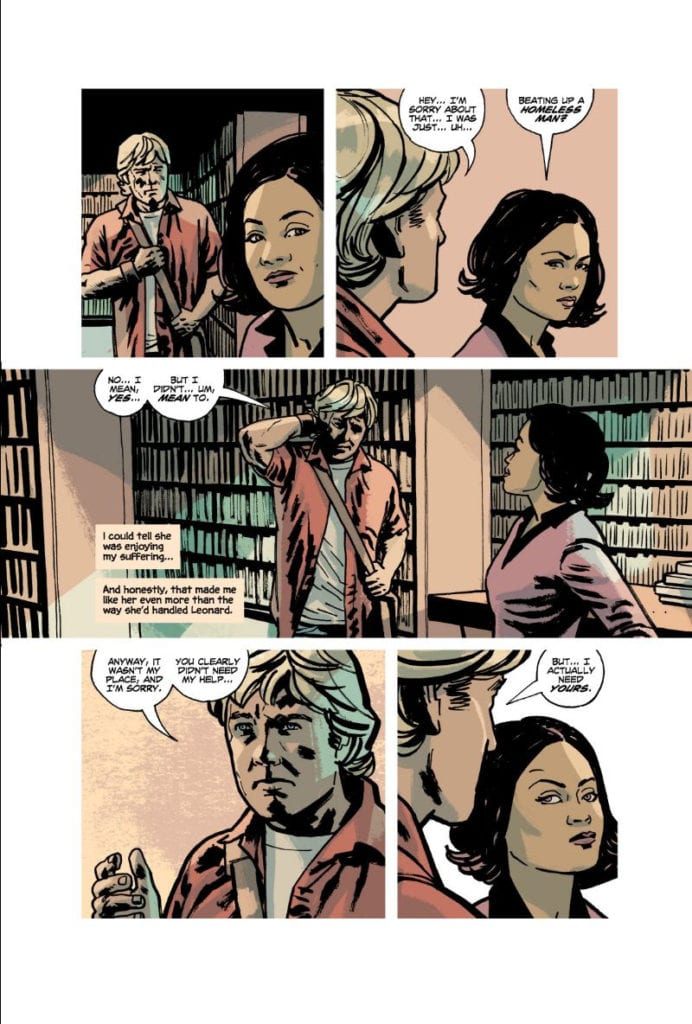 Sean Phillips’ lettering is pretty straightforward. But it’s in the small things that we see his brilliance. When one of the bad guys sees Reckless coming at him, he says “Fuck.” It’s a large word balloon with tiny font at its center. We can hear the character, almost too scared to speak. Later, as one of the others is monologuing at Reckless, the captions begin to overlap his dialogue. We see that Reckless isn’t listening anymore. He’s lost in his own thoughts. At one point, we see Reckless get confused. “??” is written into his word balloon. The font for the question marks looks a little odd, when placed on their own. At first glance, they look like Z’s. But that’s a small, easy to miss problem in what is an otherwise fantastic work of lettering.

Reckless: Friend of the Devil is a beautiful graphic novel. The masters of crime comics, Ed Brubaker, Sean Phillips, and Jacob Phillips, are showing that they’ve still got it. Pick it up, out from Image Comics on April 28th, at a comic shop near you!