After disgracing himself on the battle field, Ash Mahan is recruited for a suicide mission. He’s not alone, though; he’s partnered with The Empire’s most loathed and dangerous criminals to carry out the job.

Reaver #1 is a solid introduction to the story on Jordan’s part. He lays out an interesting concept for his world; two centuries after settlers’ arrival on this continent, they’re still fighting for dominance. We have The Empire who, in a rare twist, are presented as our protagonists. Against them are various rebel factions, some of whom have access to sinister arcane abilities.

The book certainly embraces the tropes of fantasy. Our party features a disgraced warrior, a wildling rogue, a berserker, a sorcerer…the gang’s all here. It’s a dirty half-dozen of D&D character archetypes. The characters are fun in their respective ways, and the unique story elements, specifically regarding the political balance on the continent and the nature of the magic in the story are engaging. That said, it’s not without flaws.

Embracing genre tropes isn’t a bad thing, so long as a storyteller can use them in a manner that provides a unique twist on the formula. It’s not clear that’s at play in Reaver #1, though. A lot of the plot and characterization feel like warmed-over elements we’ve seen a thousand times before.

In addition, the first quarter of the book is rather unnecessary backstory. We’re told Mahan is under arrest for cowardice, which is really enough. We don’t need to see this to get the character’s motivation; in fact, it may have been better to keep this information to reveal later in the story. For now, it would have been better to just get us right into the narrative. Because we spend so much time on this material in the first pages, we’re left uncertain of the story’s real focal point until about the halfway mark. 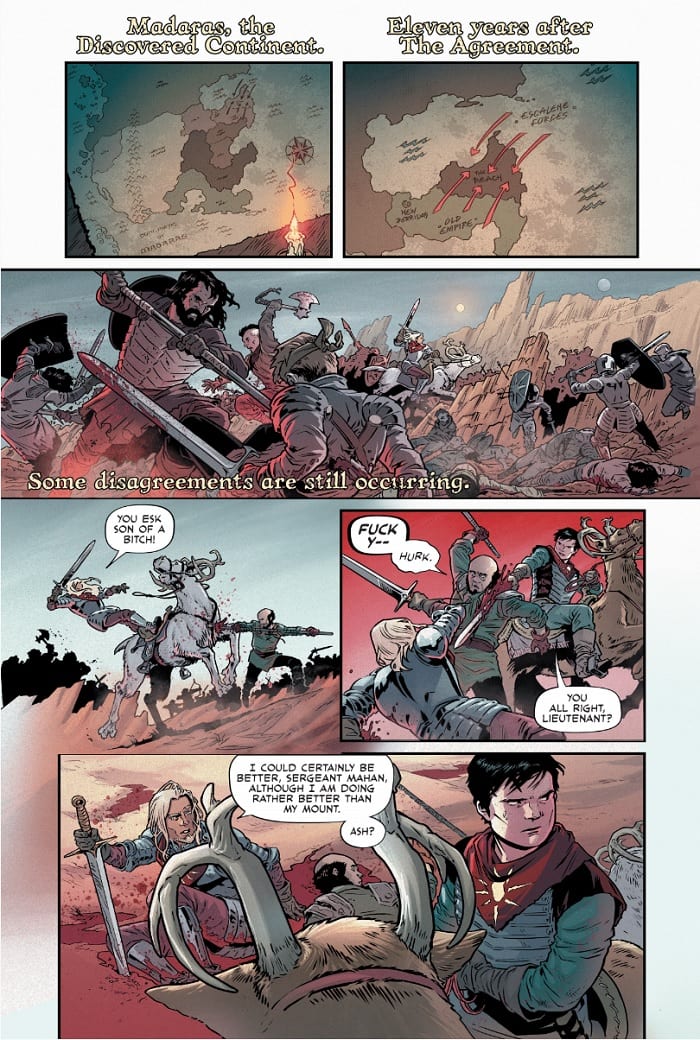 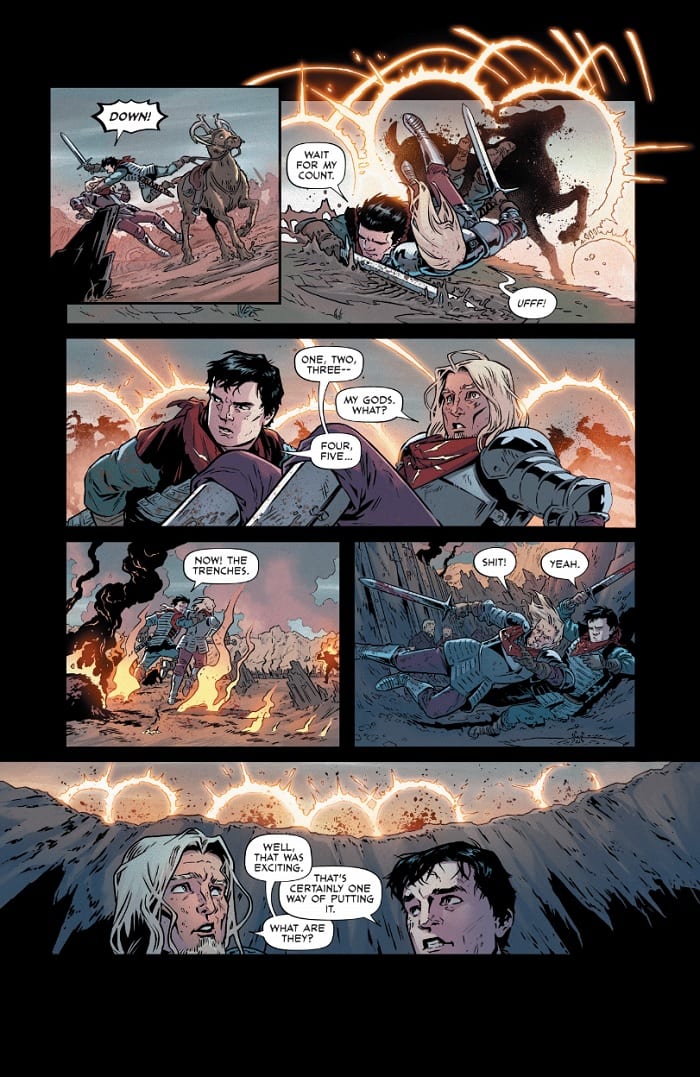 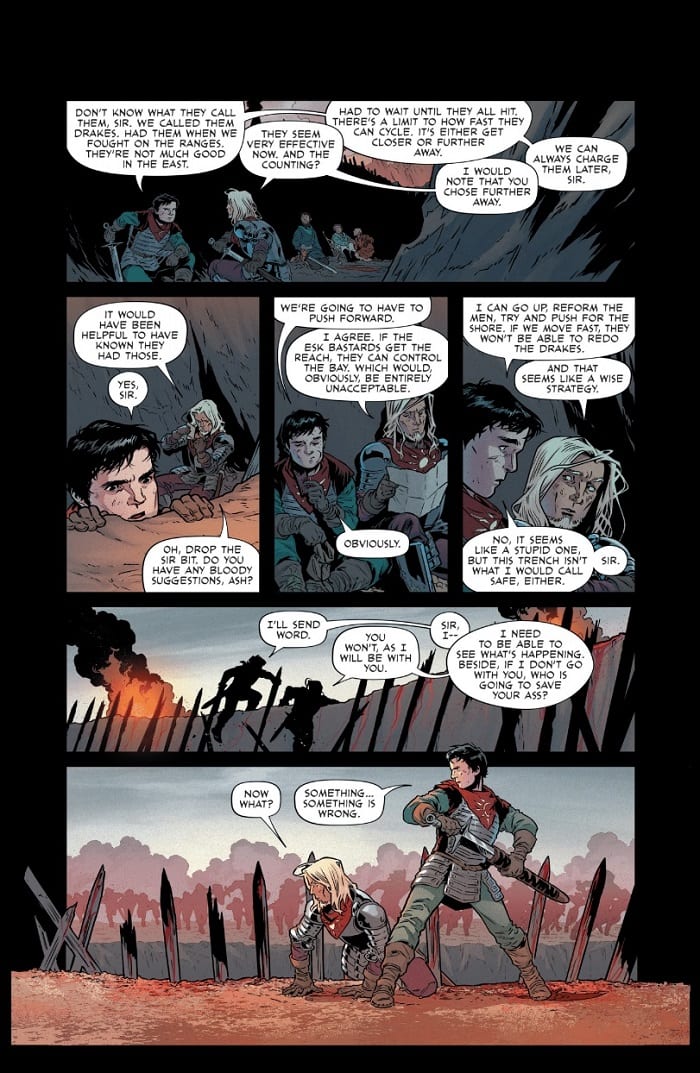 Rebekah Isaacs’s artwork in Reaver #1 is richly-detailed. She sticks to the fundamentals, never really adventuring into any groundbreaking visual work. That said, her character designs allow for a considerable degree of expressiveness.

Isaacs tends to frame her illustrations closely around her characters. Her use of setting and background is limited, choosing instead to rely on the strength of her character designs. It’s a gamble to take this approach in a fantasy world, but fortunately, it largely pays off. Her figures are emotive, and consistently hit the story beats and tone. That said, the way she lays out each panel is very dynamic…almost to a fault.

There’s a great deal of contrast of motion going on, to the point that the reader’s eye doesn’t often flow easily across the page. This works in the first quarter of Reaver #1 to sell the chaos of battle, but not as much during the slower, expository segments. There isn’t a lot of clearly-discernable intent motivating the choices in how she lays out the page.

Colorist Alex Guimarães employs a palette reliant on a lot of browns and greens, adhering to a mostly naturalistic look. It’s solid at first glance, and gains even more dimension with a closer look at the textures present in walls and other surfaces.

Reaver #1 is a respectable start to the new series. If the idea of Suicide Squad­ meets Dungeons and Dragons appeals to you, this should scratch the itch. Pick it up at your local comic book shop.

Review: High Fantasy Meets 'The Dirty Dozen' in REAVER #1REAVER #1 is a respectable start to the new series. It has some shortcomings, namely a reliance on tropes and genre cliches. Hopefully in subsequent issues writer Justin Jordan can differentiate the book a bit from similar titles that came before.