Radiant Black #5, out now from Image Comics, builds on the momentum created by the previous issue and lets the reader understand the situation proposed by the series while still leaving many questions.

Kyle Higgins left the readers with an insane turn of events in the previous issue, and Radiant Black #5 keeps up that same energy with new twists and turns. The issue is also the first to elaborate on what is going on, and it turns Radiant Black into an entirely different kind of story. Higgins’ dialogue here also does a brilliant job of showing the characters realistically working through their emotions, which flows smoothly. In comic books, it isn’t easy to have a character monologuing for an extended period of time that doesn’t impede the flow of the story. Still, Radiant Black #5 pulls it off flawlessly.

Radiant Black #5 contains some awe-inspiring battles thanks to the work of Eduardo Ferigato and Marcelo Costa. These scenes are dynamic, and the new designs that we are exposed to shine brilliantly during these scenes. The explosions, debris, and energy blasts shown during the conflicts highlight the precise detail Ferigato and Costa put into their work. The result is a phenomenal and engaging issue. It is also worth mentioning how the expressive faces the characters make throughout the issue enhance the emotional moments and make the pain behind their eyes evident to the reader. 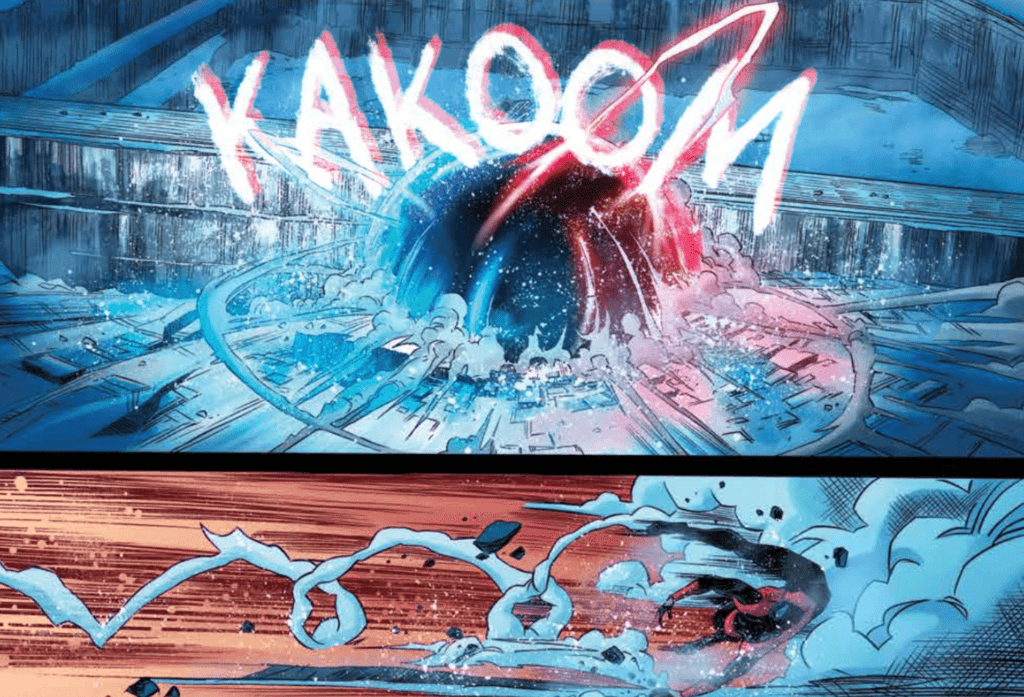 Becca Carey’s lettering in Radiant Black #5 does an excellent job illustrating the type of sound being made and fits perfectly with the art. The reader can see an example of this when the lettering adapts to a unique attack used during the final fight. The lettering mimics the style of the attack and provides a sound effect that complements the art. Carrey also uses various other techniques on speech bubbles to showcase the tone, such as having dialogue extend past the borders, giving them jagged outlines, or inverting the color scheme.

Radiant Black #5 is another issue that will hit you with unexpected twists and turns and leave you dying to get your hands on the next issue. From what is shown, it seems the series will contain many more fun and exciting characters, and there is a lot more to discover about this advanced suit that Nathan and Marshall found.

A thoroughly gripping issue that keeps up the energy created by the previous issue, and is complemented with superb art and epic fight scenes.Review: RADIANT BLACK #5 - An Exciting New Direction