Review: QUESTION: THE DEATHS OF VIC SAGE #1-Who Are You? Who? Who?

Vic Sage uncovers something from his own unsavory past in the midst of chaos in The Question: The Deaths of Vic Sage #1, out this week from DC Black Label.

Jeff Lemire scripts a unique mystery for the Question the likes of which he has never dealt with before. Denys Cowan pencils and Bill Sienkiewicz inks this dark tale, and Chris Sotomayor handles the colors for Hub City on the brink of collapse. Willie Schubert takes care of the lettering. 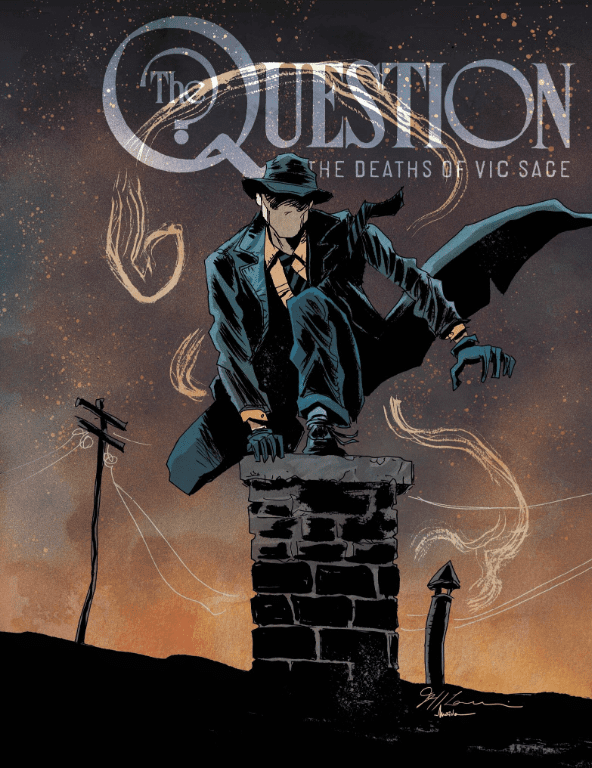 In the modern age of comic books the art has become very realistic and extremely detailed in quite a few cases. Shading is usually done with cross hatching and short straight lines, but Cowan and Sienkiewicz use scribbles that make this book look like it was made decades ago and just finally released this week.

Cowan and Sienkiewicz give this book a very gritty feel that looks like a throw back to the late 80’s. While the art makes this book look like a counterpart to The Dark Knight Returns, the issue brings up some very real and very current problems in today’s society. The Question: The Deaths of Vic Sage is a new book I’m sure Frank Miller would actually love. 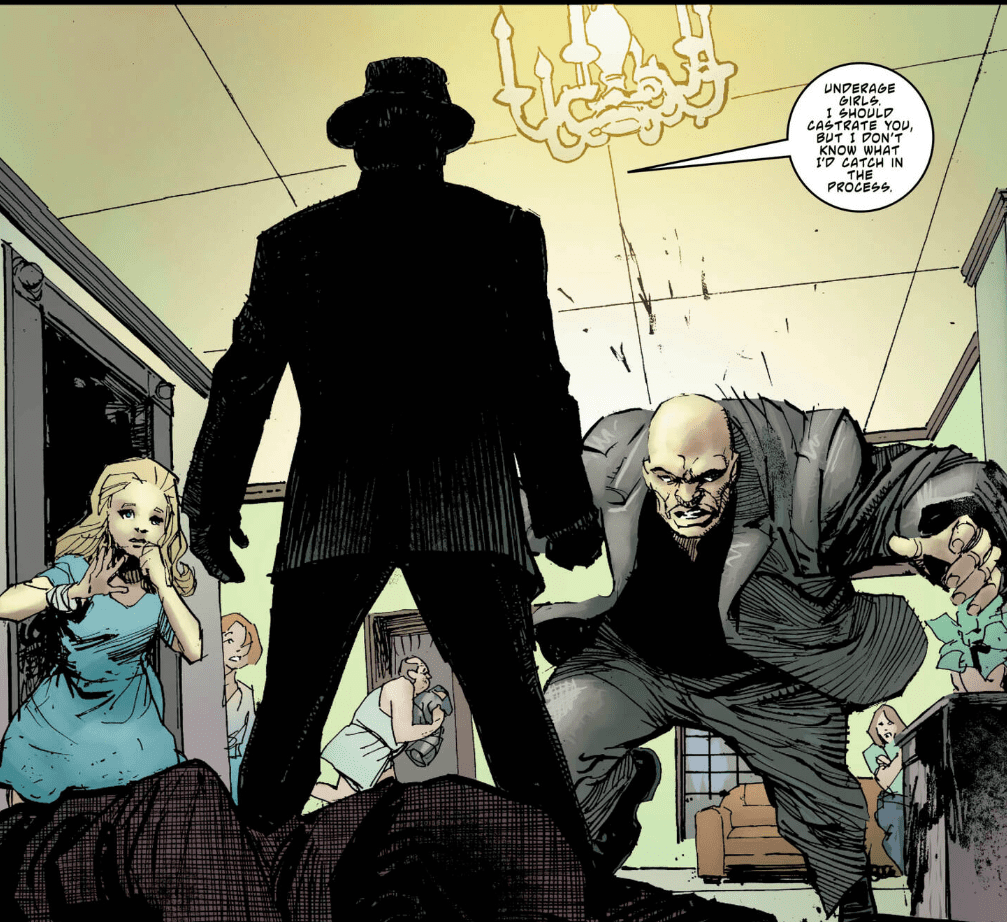 Sotomayor’s work does a fantastic job of portraying the nostalgia of an older story. The color blending is more obvious and you can still see “brushstrokes” in a few panels. Sotomayor’s color palette is not too expansive in this issue, and is very similar to the style you’d see in the horror genre.

The Question: The Deaths of Vic Sage #1 reminds me of Seven; the detectives are investigating the killer in all these very shady and seedy locations where the lighting is always dim to avoid detection. These are places most people would avoid, and if you had to walk down an alley lit like Sotomayor’s Hub City, you would be checking your phone for any alternate route or dialing 911 preemptively so all you’d need to do is hit send.

Schubert’s lettering looks free hand and similar to handwriting. While the words have the appearance of an older comic, the sounds are very crisp and modern. The lettering combined with the use of internet and computers are the consistent reminders that this issue is not actually a flashback.

With questions still needing to be answered Vic sits down at a computer and shows, those that still might not have realized, that the internet has the answers for everything. If you’re out there spouting off completely wrong information when all you have to do is perform a search on Google, it’s pretty embarrassing for all of us.

Just like in the rival’s Immortal Hulk, also out this week, the Question is dealing with a city full of people that have had about enough of the bull$#!t. A Bug’s Life taught us that strength in numbers is insurmountable, but obviously not enough of the public has seen that movie. The generation that grew up with that movie are adults now, and things have got to change.

We’re starting to realize the power we have and it’s scaring those in power so much they’re throwing billions of dollars into the pockets of garbage politicians who couldn’t pass an English test to save their lives. Stories like this one and the Question’s relentless pursuit of the truth are inspiring forces giving us the confidence that what we’re doing isn’t a lost cause.

What did you think of The Question: The Deaths of Vic Sage? How do you think this book would fit into Frank Miller’s Dark Knight universe? Let us know in the comments below.

Review: QUESTION: THE DEATHS OF VIC SAGE #1-Who Are You? Who? Who?The Question is left with more questions.