ComiXology Original Quarter Killer by Vita Alaya, Danny Lore, Jamie Jones, and Ryan Ferrier reaches its penultimate chapter with a fourth issue that ratches up the tension with a dual narrative setting up one hell of a cliffhanger ending.

From ComiXology- Injured in Staaten Eylandt, QK is out of commission when an anonymous message comes for a 12 quarter job. Lo Tek, Hi Top, and Aya take the mark, leaving QK to rest and recover. Their target? The offices of the New York State Senators, who hold the deciding vote on a bill that will determine the rights and powers of corporations as entities. While the gang infiltrates and jockey’s data, QK faces some uninvited guests back at the Arcade. It looks like they’ve finally been pinged by Pyn’s, and he is NOT happy about his old colleague getting involved in the business again. 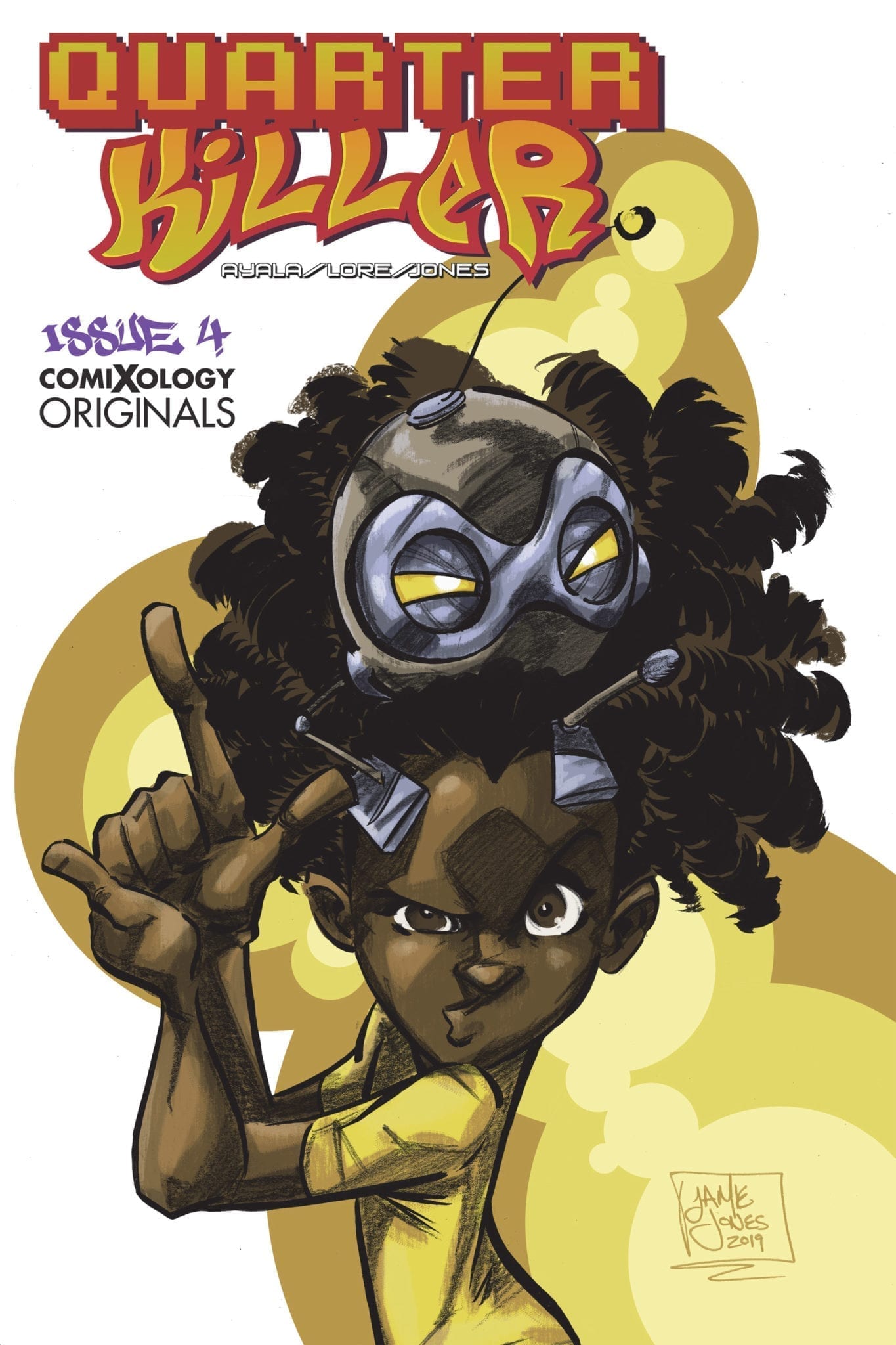 Being the fourth issue of a five-issue series, Quarter Killer #4 hits the ground running with its plot. Lo Tek, posing as a driver, manipulates Senator Ellis (the mark) as they enter the State Senators’ house, into a room with the young Aya. So far it plays out like a typical heist plot. But the interesting take here is how instead of the usual scene of forced interrogation, intimidation on the senator, Aya, and Lo Tek have a serious discussion with the man. And that results in an almost mutual understanding on both parts. It’s a clever bit of narrative. It’s unexpected and enriches both the stories and the characters. 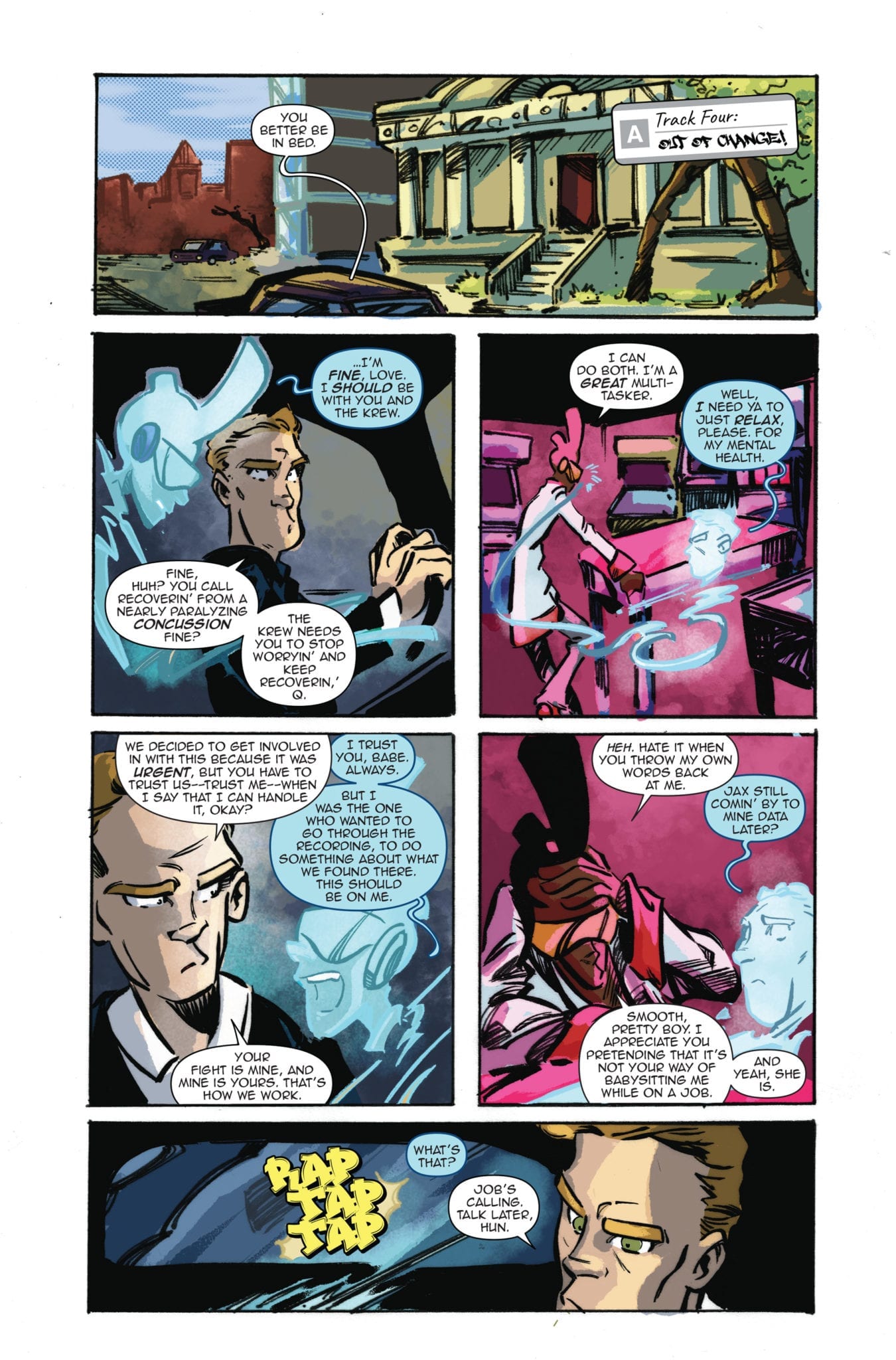 The other story told here (and it’s mixed in with the roping in of the senator to create a great sense of parallel narrative) is Q.K. getting attacked by former ‘friends’. These scenes are fast, tight and intense; they add urgency to the issue and they also lead into the cliffhanger that sets up the upcoming final chapter as well.

The credits for Quarter Killer list artist Jamie Jones as creating the “Beats” (the writers are credited as ‘Lyrics’). That is as near perfect a description as you could get, because the art in QK moves, jumps and dances its way across pages. Jones’ thick lines, exaggerated posture, swift panel movements, and fantastic patterns and colored pages/backgrounds create something truly unique. There are newspaper/comic strip influences in its panel work, and that’s always welcome. 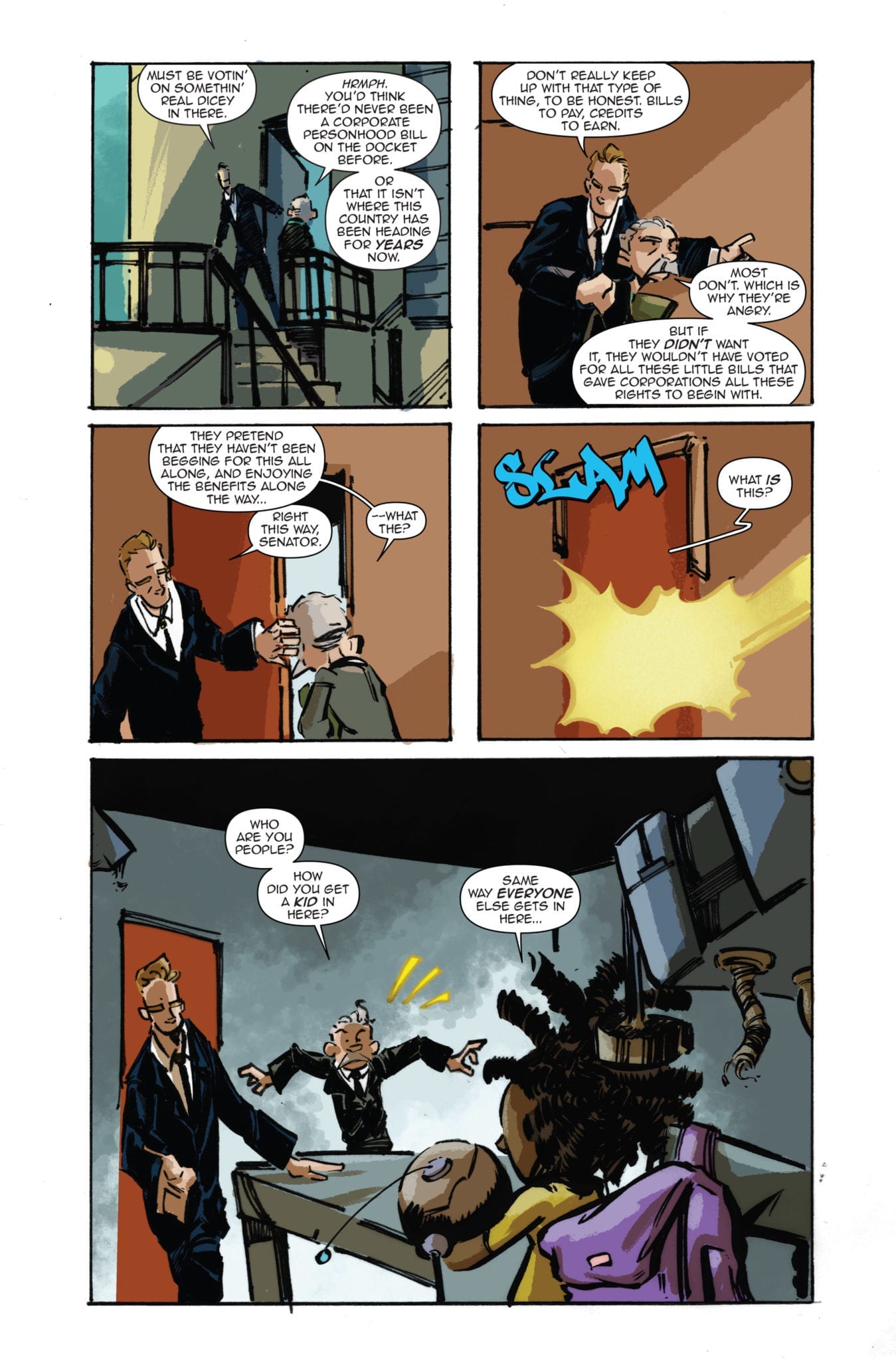 And speaking of colors and patterns, this is one vibrant palette. It gives this cyberpunk story visual energy that runs alongside the pace in the narrative.

Quarter Killer is unique and should not be missed. There is one issue left in its run, and there is still time to jump into this comic and bop along with its beats. Raise the volume on this one.

'Quarter Killer' is unique and should not be missed. There is one issue left in its run, and there is still time to jump into this comic and bop along with its beats. Raise the volume on this one.Review: QUARTER KILLER #4 Raises Its Narrative Volume, Rythms, And Beats