This Wednesday, Marvel Comics’ PUNISHER 2099 #1 shows a future that isn’t so bright or nice in a multitude of ways.

The Future Isn’t Paved in Gold

Punisher 2099 #1 is the exact opposite of what you’d expect from a title revolving around Marvel Comics’ famous antihero. On one hand, it’s unique and different from other Punisher titles. But, in the other hand, it’s not what you typically want from the gun-toting (sometimes psychotic) skull-wearing killer. Instead, Punisher 2099 #1 revolves around Public Eye officer Hector Tago as he delves deeply into the corruption that surrounds him. Joining his ranks is this era’s previous Punisher, Jake Gallows. Though, it’s never stated if this is the same Gallows from the original series. Comic timelines, am I right?

Instead of making Punisher 2099 #1 a usual Punisher tale of revenge for one’s family, writers Lonnie Nadler and Zac Thompson change it up. This time around, Tago becomes the Punisher, not for revenge, but to oppose the “system” he worked for. In the future, the police wear body cams, much like ours now, but they’re immensely advanced. There’s also the Social Score they use for the populace. Are you doing your part for the major Corporations? If so, your score goes up. If not, or if you look bad towards others, it goes down.

Nadler and Thompson have some grand ideas that they showcase in Punisher 2099 #1. Some they dive into, others they don’t, which is where one of Punisher 2099 #1’s pitfalls happens. For a 30 page comic, it includes great worldbuilding moments, yet it feels like it never truly explores what the duo are presenting. During one moment, a new concept will come to light, then immediately be dropped. This happens to the extreme when Tago becomes the Punisher.

This transformation happens off-screen with the suit appearing out of nowhere, making it feel like Punisher 2099 #1 originally was the beginning part of a larger picture. The team introduces the suit towards the last few pages while retaining a mystery around it. This “suit it” feels last second and rushed.

Punisher 2099 #1 feels like a comic setting something up that’ll pay off later in the series. But, with it being a one-shot, it never feels like it rewards the reader with a payoff in the issue. This could be boiled down to the creative team only having one issue to flesh out a whole new character and their background/city while trying to tie it into the main 2099 event. When events get tie-ins with new characters/places, the creators on said issue have the harrowing task of tying it into the event, while still making it stand out on its own. Two opposing things.

On one side you want the comic to tie into the event, yet you also want it to be able to be read completely on its own. This seemed to be the problem with Punisher 2099, as the creators are forced to make everything fit into these 30 pages as part of a larger “2099” story.

Perhaps if this event leads to a new line of comics based on these 2099 characters, Nadler and Thompson’s story will be able to fulfill its potential. There are teases of awesomeness in this one issue; if given even a miniseries, Punisher 2099 can shine.

Matt Horak and Eoin Marron share art duties. At times, it seems one works on a “flashbacks” while the other works on the primary story. But, it’s not told what art duties they share. What can be said is their panel placement looks fantastic at times. The duo showcases a great sense of making a page seem unique and fun while having a great flow. But at times the art being portrayed in the foreground looks muddy, especially when compared to the great backgrounds.

The backgrounds seen throughout Nueva York are beautifully cyberpunk. They feel gritty, dirty, filled with sketchy lines, and a place you wouldn’t want to live. Yet when it comes to characters or objects that should jump off the page, they never do. Instead, they look obscure, hard to process, unfocused. Or in the action scenes, they feel stiff, when they should be fluid.

The colors come courtesy of Rachelle Rosenberg, and most of the time, the colors are great! Showcasing a neon-esque color palette, Rosenberg proves that she has a great understanding of futuristic feeling colors. Yet, when a face takes over a greater amount of a panel or is showcased more so than usual, the colors start to make the face feel inorganic, coming off with a weird plastic look.

Punisher 2099 #1 is heavy in dialogue, which shows more in some scenes than others. At times, letterer Joe Sabino has his work cut out for him. During some moments in Punisher 2099 #1, Sabino is able to move the dialogue boxes around to help guide the reader while not covering art. But in heavier dialogue/narration scenes, this isn’t possible, which starts to make the reading feel like a chore while blocking the art.

Punisher 2099 #1 is toted as a one-shot, yet it reads akin to the first issue of an ongoing. If the team had a larger page count or a mini-series to flesh out their ideas, Punisher 2099 could’ve been a fun twist on the long-running mytho. Instead, the one-shot feels cluttered, while the art never hits the epic feeling it’s going for.

Cover Story: I absolutely loved Marvel 2099 growing up. I remember finding issue one of Punisher, Spider-Man and falling in love with the covers, but the costumes were what drew me in. I loved the costume in the ’90s, but still, I think this new costume is amazing! Especially on the cover. Sadly, in the interior, the costume doesn’t look as badass. But major props to cover artist Patch Zircher and Java Tartaglia for making the costume and cover look amazing! 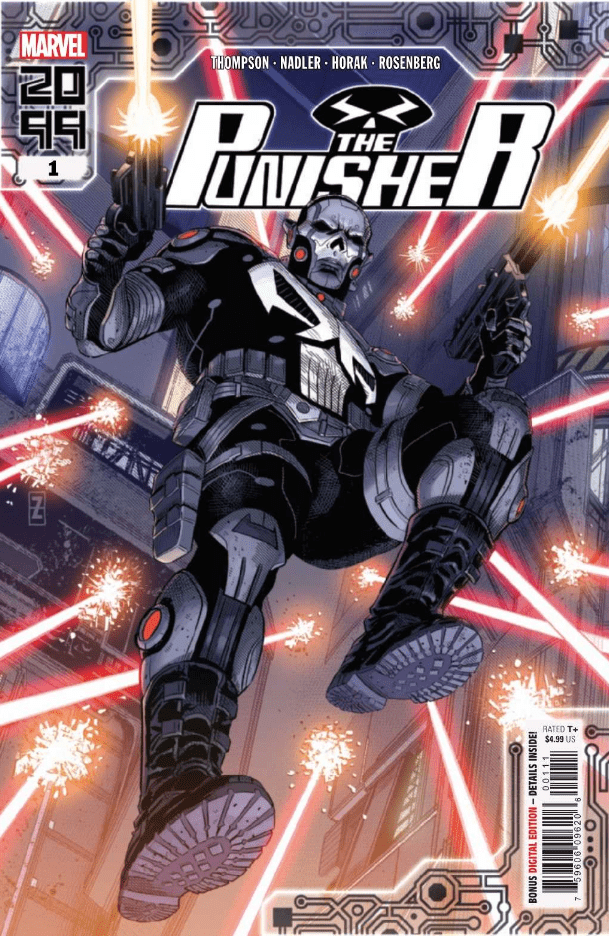 What did you think of the Marvel 2099 tie-in? Also, did you read the edge filled original ’90’s series?

If you’d like to check out our coverage on other Marvel 2099 titles go here. Wanting more info on the titles to read for Marvel 2099? Check out the website!