Project 45 #1 published last month, is the first comic from a new indie publisher Enigma Resolve created by founder Kal Mebane. It’s a throwback to the late 80s and early 90s sci-fi animation. Joining Kal is his co-writer Yelena Mebane, co-penciler Jay Hernandez, and inker Jake Isenberg. The comic is available on their website store in multiple formats, while Comixology and select comic stores have the full-color version.

Kal and Yelena Mebane have Project 45 #1 go at their own pace. Like most military conflicts, the antagonists reveal themselves by attacking without warning, not unlike terrorists. After this attack is a transition to the military school of the main cast, a school favoring diplomacy no less, with the antagonists not favoring this, the reader might feel a little anxious about what’s coming. As they get to know POV character Carmen Ariez the reader can immediately sympathize with her rough start. Because for a school that specializes in diplomacy, the students don’t seem very welcoming. For all of her troubles, Carmen gets hit in the face with slime and is in a group with the school’s problem children.

The titular Project 45 all seem very rough around the edges with their record as underdogs and attitude problems. But then again, the best group Project 12 are elitists who, with subtle context, flaunt their status at Carmen. It’s tough not to empathize with her when she crawls up in a fetal position on her bed. That being said, Carmen and the rest of Project 45 may have the chance to prove to everyone when the antagonist targets one of their teammates. 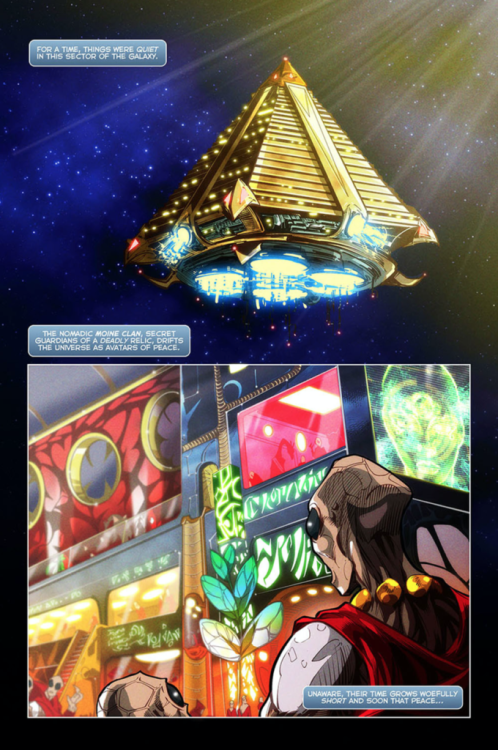 Kal Mebane’s best ability in Project 45 #1 is in the awe-inspiring artwork. Every scene in the issue evokes stylizations similar to 80s sci-fi anime like Mobile Suit Zeta Gundam. With so many character designs, settings, and intricate space backgrounds, it’s good to have Jay Hernandez backing him up. The opening scene of a pyramid spaceship is filled with an inner-city that looks like something out of 5555 Interstella. It not only looks good, but there was an entire culture of people thriving, which by the time the antagonist’s attack creates a sense of tragedy.

As the inker, Jake Isenberg has to bolden the significant plot points on characters because some of the backgrounds would be too distracting. Because Mebane’s colors give such intricate detail to galaxies and machinery is highly mesmerizing. Take a moon-sized base, so large and black the design is perfect for stealth in an already gigantic amount of space because it displays the need for these villain’s secrecy against the intergalactic military; despite how confidant some of the supporting villains sound, they’re still in a vulnerable state.

As a letterer, Mebane is both creative and efficient, word balloons that sometimes get a red outline to display the volume of voice and wordmarks that look crafted for specific tasks. Almost none of those wordmarks they’re for the same action; save for instances like mechanical reactions to other actions, including a bionic arm adjusting for weapon mods or a cyborg reacting to a sneak attack. The ending wordmark, in particular, brings up similarities to a classic 80s neon sign to stay true to the influences of Project 45 #1.

Project 45 #1 sets up what can become a tribute to several fan-favorite sci-fi shows. The aesthetics paint a universe ready for the readers’ pleasure, especially thanks to villains ready to ruin it all. With them coming for the underdog team of Project 45, anything can happen.

Project 45 #1 serves as a bit of a rough introduction to a new series and publisher but one that goes out of its way to show its inspirations.Review: PROJECT 45 #1 - Some Old School Sci-Fi For Your Day