If you know what happened in the finale to Image Comics’ brilliant series Primordial, then you’re smarter than I am. When it comes down to it, I’m not sure Primordial #6 makes much sense. But, even more importantly, I don’t think I care. In fact, it feels like there was no better way to end this series. Writer Jeff Lemire, artist Andrea Sorrentino, colorist Dave Stewart, and letterer Steve Wands have been writing a series that defies logic. If Primordial‘s finale made any sense, well… that wouldn’t make much sense.

The reason a cryptic, confusing, mysterious script like Lemire’s works is because it nails one thing completely: emotional resonance. You might not know what’s going on, but you care that it’s happening. Lemire has taught us to love these characters. So when they look up at large sci-fi objects coming out of the sky, we’re not stuck on the mystery of what’s flying towards them, we’re fixed on their expression. Lemire wants to cut through the psychedelia and make you feel. And make you feel he does. The fear, sadness, and catharsis that these characters experience hits you like a train. As you turn the last page of Primordial, you may not have all the answers, but you’ll be satisfied. 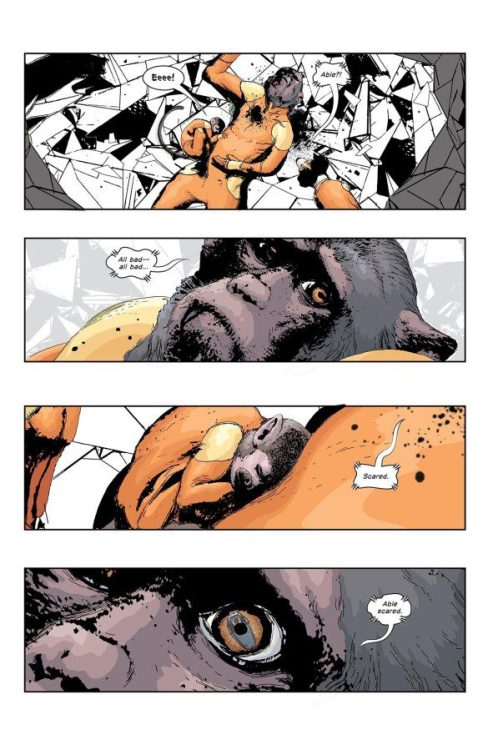 Sorrentino, once again, draws in a bright style with thin pencils, that is completely different to his usual chiaroscuro approach. In many ways, this issue of Primordial sees all of Sorrentino’s experiments in this series, with style and form, come crashing together in a glorious, tangled mess. “Mess” both feels like the wrong and perfect word to use here. In one sense, Sorrentino’s art is ordered and neat. Small panel boxes sprinkle the page, dividing scenes up into little pieces. But the overall effect is one of mind-bending chaos. Sorrentino gives us reason to be in quiet awe of whatever is happening in these pages. It’s complicated, occasionally a little rough around the edges, but beautiful.

The first thing you’ll notice about Primordial #6 is how little color there is to it. Stewart makes great use of big portions of dead space. Nearly every scene is framed in large sections of white. It makes the comic feel like it’s breaking apart into nothingness. The rest of the issue is colored in relatively dull colors. There are plenty of greys, browns, and pale blues. But in these scenes Stewart often adds a ripple of brightness. There is a stark contrast here between the natural, earthy scenes of normal reality, and the technicolor, neon moments of sci-fi weirdness. Stewart gives each of these aspects their own unique flavor and brings them together in a spectacular way. 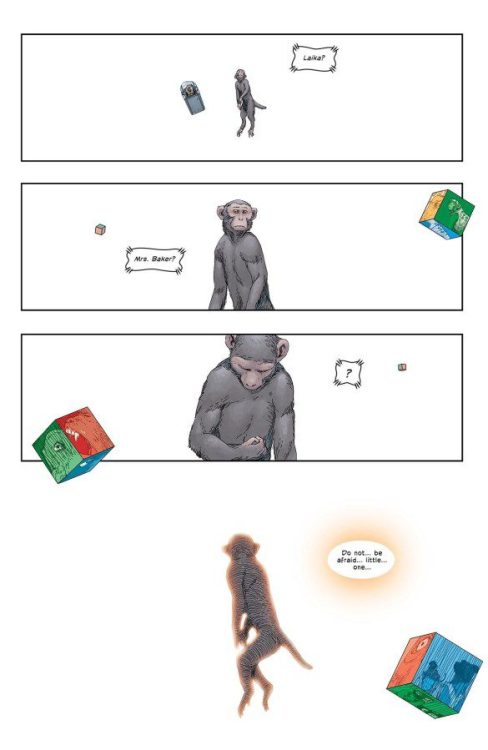 Wands’ lettering choices continue to push the story forward effectively, sometimes in the most subtle ways. We continue to see the dialogue from the animals in squiggly word balloons. The way Wands presents the animals’ lines tells us that they are different from everyone else, in some mysterious way. In one flashback, we see the death of another character. As they slip away, the tail to their word balloon begins to look wavy and curled. This makes their line seem a little weak, like it’s struggling to make its way out. But, in a strange way, it also begins to resemble the word balloons of our animal friends. In the last moments of this character’s life, do they experience some form of enlightenment too?

Image Comics’ Primordial has been an utter joy. This creative team has been experimenting with the medium, constantly pushing themselves to new heights. And despite there being little logical sense to this conclusion, there’s a strong emotional resonance to it. Primordial #6 is a stunning conclusion that puts its heart before its head, to brilliant effect. Pick up Primordial #6, out from Image Comics February 16th, at a comic shop near you!

Image Comics' PRIMORDIAL has been an utter joy. This creative team has been experimenting with the medium, constantly pushing themselves to new heights. Review: PRIMORDIAL #6 — What Just Happened?