POST AMERICANA #5, available in comic book stores on Wednesday, April 21st, details our favorite wastelanders’ arrival at the mysterious Marcy’s abode. Mike made contact with her earlier in the series and hatched a plan to breach the Bubble of the President. But when his group arrives, they will find more than they bargained for. 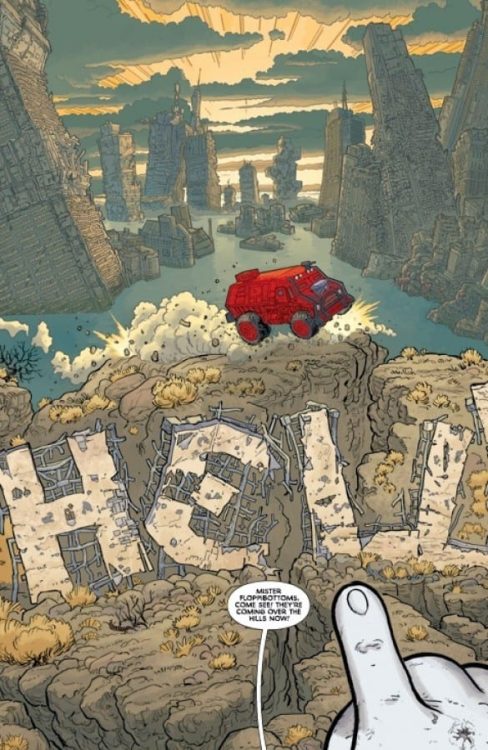 After days of trials and tribulations, Mike’s dedication to finding Marcy has finally paid off. Our crew of protagonists arrive at Wonder Studios, an entertainment studio akin to those in our own world. However, there is one key difference—the mascots are fully automated, self-conscious robots. 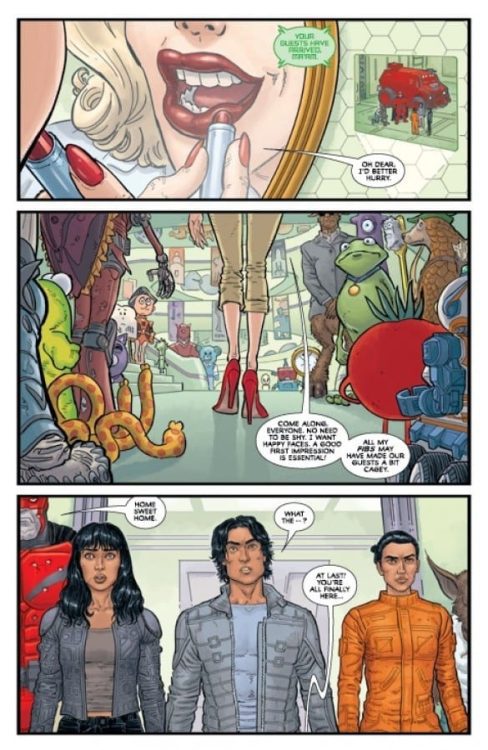 The life of luxury and comfort is a far cry from the desperate circumstances Marcy led Mike to believe they were in. This seeming betrayal reminds us of times in our lives when people took advantage of our actions of goodwill. Their bewilderment speaks volumes. We wonder if there’s still any hope of the two groups teaming up to take on the Bubble.

Steve Skroce’s writing does a great job of guiding readers along this new set of circumstances. We finally see where all the fantastical “hero” types, such as Night Terror, come from. And readers will find there’s more than meets the eye in the person of Marcy, especially after learning she’s roughly 100 years old!

Skroce’s penciling and ink work, Dave Stewart’s coloring, and Fonografiks’s lettering were stunning as always. The cartoonish designs of the automatons are a stark juxtaposition of the more realistic protagonists. The human characters are filled with natural tones in contrast to the bright, rainbow colored robots, further differentiating the two groups. The lettering was also impressive as well—despite the large amount of explanatory dialogue, the word balloon placements refrain from taking over the panels.

POST AMERICANA #5 introduces to a new character with an intriguing characterization. We’re anxious to see what role Marcy has to play in the coming issues.

Do you think the team at Wonder Studios will have a chance at infiltrating the Bubble? Let us know in the comments below!