Review: POST AMERICANA #3 Gives Us The Backstory We Were Waiting For

POST AMERICANA #3 hits stores on Wednesday, February 24th, bringing readers one step closer to the fight between the “bubble” and the post American wasteland. Carolyn and Mike have been on the run for three issues now, but there’s still a lot we don’t know about their predicament. Fortunately, the duo has just arrived at a seemingly safe settlement. But could there be more going on?

The issue opens with Carolyn and Mike arriving at the hardened warrior’s most recent abode. Yet their greeter is slightly less than welcoming. 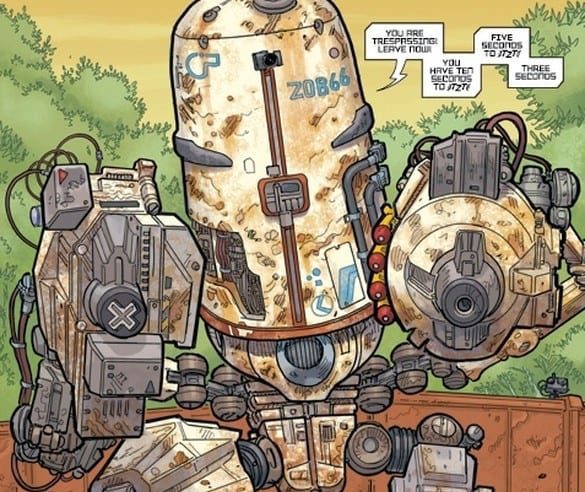 It is here we meet Edward and Gene, two tinkerers who use their skills to protect their community from wasteland cannibals. Their reaction to Carolyn’s return is heartwarming. Readers see that despite the harshness of their environment (and the means by which they’ve been forced to defend themselves) this family still has the capacity to show love to one another. 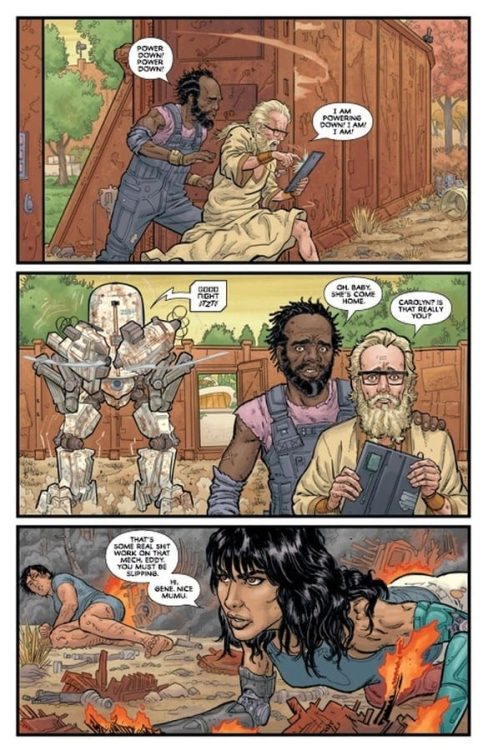 Writer Steve Skroce weaves together an immersive backstory for this already enthralling series. He provides us with just enough information to whet our appetites for more exciting developments. And the surprise at the end seals this present of an issue wonderfully.

Skroce’s penciling and ink work creates suspense via slowly paced sequences between panels. These are fleshed out with colorist Dave Stewart’s warm shades set behind the metallic colors of Carolyn, Edward, and others using steampunk-esque technology.

Fonografiks’s lettering was impressive—Mike’s narrative is placed perfectly around the illustrations to simultaneously inform the reader and point them to the intricate panel details.

POST AMERICANA #3 gives readers the backstory they’ve been waiting for. We’re excited to see what develops from the revelations within this issue.

Did you like the long-awaited backstory? Let us know in the comments below!

POST AMERICANA #3 hits stores on Wednesday, February 24th, bringing readers one step closer to the fight between the "bubble" and the post American wasteland. Carolyn and Mike have been on the run for three issues now, but there's still a lot we don't...Review: POST AMERICANA #3 Gives Us The Backstory We Were Waiting For