Writer Steve Orlando teams up with artists V Ken Marion and Sandu Florea to create a safe but reaffirming comic about Wonder Woman’s values, as well as setting up some supporting character backstory for the future of Event Leviathan.

Helen Paul was rescued as a young girl by Diana Prince, a.k.a. Wonder Woman, when a terrorist attack killed her parents. She was then adopted and raised by a pair of retiring A.R.G.U.S. (Advanced Research Group Uniting Superhumans) agents, with a little help from the Amazon herself. When she came of age and learned the truth about who her adoptive parents were, she wanted to join the cause and became an A.R.G.U.S. agent herself. Her missions place her alongside fellow agents like Steve Trevor and her childhood mentor, Wonder Woman. One such mission takes the trio to Gorilla City to rescue a deep-cover agent from the terror of its new ruler, Grodd. Helen proves herself to be a quick-thinking and compassionate hero in her own right, doing her part to avert bloodshed. However, what will become of her when she learns the true secrets of her past?

Orlando’s writing on this issue is solid. This Annual delivers pretty standard fare for an uplifting and action-packed Wonder Woman tale, but it’s still plenty entertaining to read. Watching Diana break out her diplomacy skills right after kicking some baddies into the stratosphere will never get old. The Amazon Princess’ constant desire for peace and simultaneous willingness to fight has always been inspiring. Orlando also does well in making Helen Paul an interesting part of the story as it is partially played out through her eyes. The opening pages are largely from Helen’s perspective, and through this, the audience gets to see Wonder Woman through the eyes of an impressionable growing child. Helen also becomes a semi-engaging part of the Gorilla City sequence, mainly through her technical knowledge and how she uses that to bypass major problems. The dialogue here is snappy, and the pages flip by smoothly as the plot progresses along in a fun but predictable manner.

Unfortunately, the issue’s pacing comes to a bit of a halt on the final few pages. The execution of the Event Leviathan tie-in feels tacked on, as it’s delivered in a flurry of exposition before the final page plot-twist. The issue would have benefited from its exclusion. Also, while Helen Paul is an interesting new character and Orlando does a good job at making her and Diana’s connection feel important, it would have been nice to see her skills more on display during the Gorilla City story. As it is she has a couple of interesting moments, but not much beyond tech jargon and a bit of compassionate play-calling. 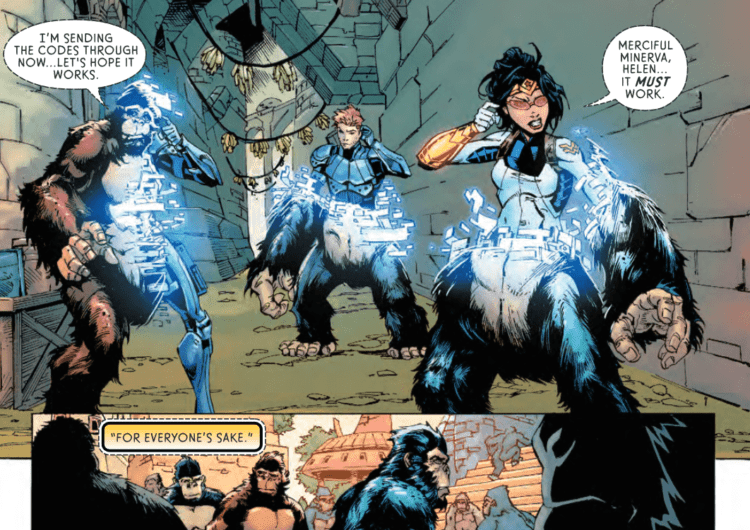 V Ken Marion’s pencils are pitch-perfect for the sort of mainstream superhero fare this Annual has. There’s an angular quality to the character drawings that fall under the Jim Lee umbrella of style, while still maintaining Marion’s aesthetic. The action is drawn beautifully, with plenty of kinetic energy that the audience can certainly enjoy without ever losing their place. Gorilla Grodd also looks appropriately menacing, proving that Marion is adept at drawing monstrous telepathic apes. His work is given depth by longtime artist Sandu Florea’s inks and brought to life by explosively vivid Hi-Fi digital colors. “Wonder Woman Annual #3” is undoubtedly a gorgeous comic to behold.

Pat Brosseau’s lettering accomplishes a neat distinction between spoken or narrative dialogue and Grodd’s telepathic speech. It’s a bit of a minor element, but it does add to the atmosphere and understanding that Wonder Woman and her team are dealing with beings who don’t talk like ordinary people. They are a race of telepathic gorillas, after all.

Despite being a bit derivative, “Wonder Woman Annual #3” is a fun adventure from the eyes of a young ally of the Amazon peacekeeper. There’s a nice bit of simple political drama that allows Orlando to show off the complexity of Diana’s character just the way Wonder Woman fans want. Despite the halt in the pacing on the last few pages leading into the Event Leviathan plot, the issue is saved by excellent visuals through an adventure in Gorilla City. Even if the crossover segment is flawed, the final page plot twist is undoubtedly going to be essential for the future of Bendis’ event. For Wonder Woman and Gorilla Grodd fans, this Annual would be a good one to have in your pull list at your local comic shop come October 30th.