Japanese artist Piytotycho has been self-publishing Bonyeer stories since around 2015. Sold at cons and online, the Japanese issues of Bonyeer showed the popular Instagram artist’s growth from year-to-year, but also went through multiple sizes, a flip in orientation, and eventually introduced a dual-language format to support both English and Japanese readers. Bonyeer the Aromatic #2 is part of a new release of the series which, with the assistance of editor and letterer Eric Klaus, reprints all the Bonyeer stories from the beginning with a consistent translation, format, redrawn English sound-effects and — for the first time for the series — full color. No more digging for out-of-print issues in online auctions. For an introduction to Piyotycho’s stylish-as-hell work, this is a great place to start. 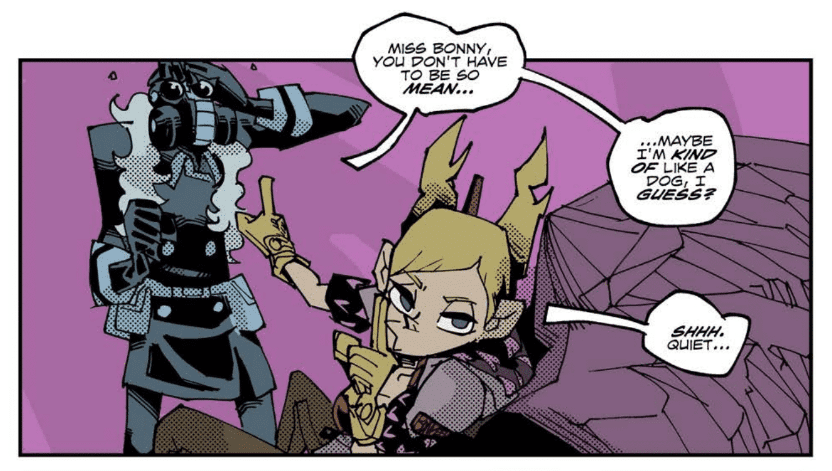 The issue opens on treasure-hunter Bonyeer declaring her newest plans to her partner-in-crime, Doc. She exposits on a hidden temple in Death Valley that holds a white stone with the ability to cure anything — which means the person who finds it is going to get very, very rich. Though, when the duo arrives, the building looks far more like a factory than an ancient temple. A factory with a big, angry minotaur stomping the halls. Matters aren’t helped by the two’s strange medical conditions. Bonyeer’s sweat produces a stench bad enough to murder zombies and wreck machinery, while Doc’s allergies leave him unable to venture the world without a gasmask. But the two are determined to force their way to fame and fortune. So long as it doesn’t kill them first. 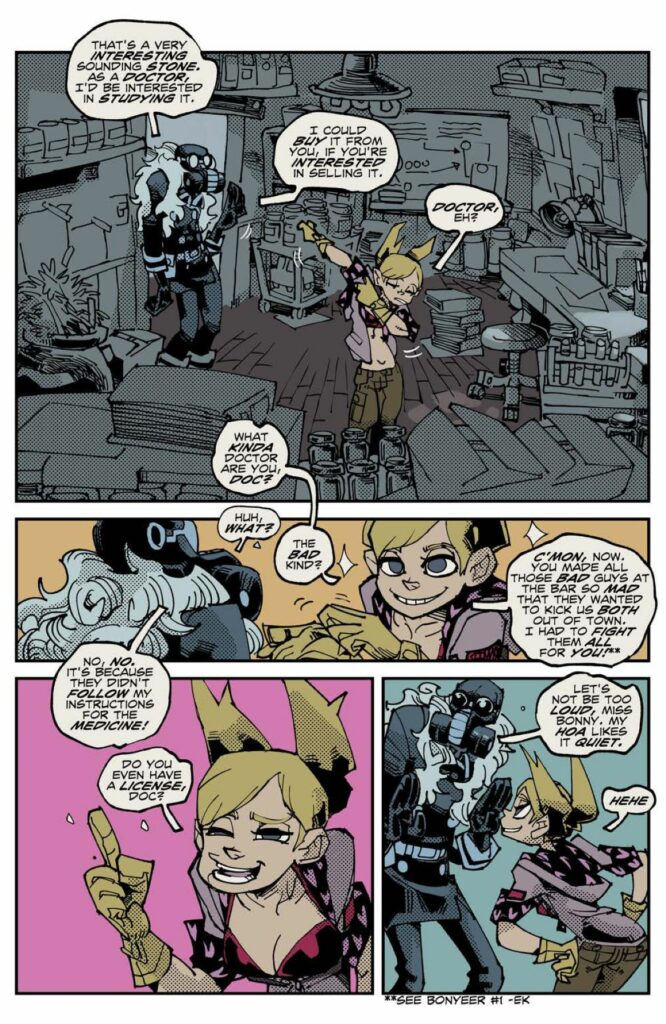 Bonyeer the Aromatic takes a no-frills approach to cartoon storytelling. The second issue continues establishing how Doc and Bonyeer began adventuring together, the two’s friendship being the engine that drives the series. Their broad personalities — a vain, selfish treasure-hunter and a timid but obsessively curious amateur doctor — naturally bounce off one another, and lead to some pretty damn fun gags. This isn’t a series about slowly uncovering a large, secret history, or unraveling a giant meta-narrative. It’s about two characters that are fun to spend time with, and whatever weird scenario the artist can dream up next. It’s reminiscent of quite a few classic 90’s cartoons, and any cartoon where body odor is a plot point is also going to indulge in some 90’s style gross-out gags. Though, for being baked into the premise of the book, those gags are relatively understated and don’t go as far as the likes of Ren and Stimpy or Cow and Chicken. 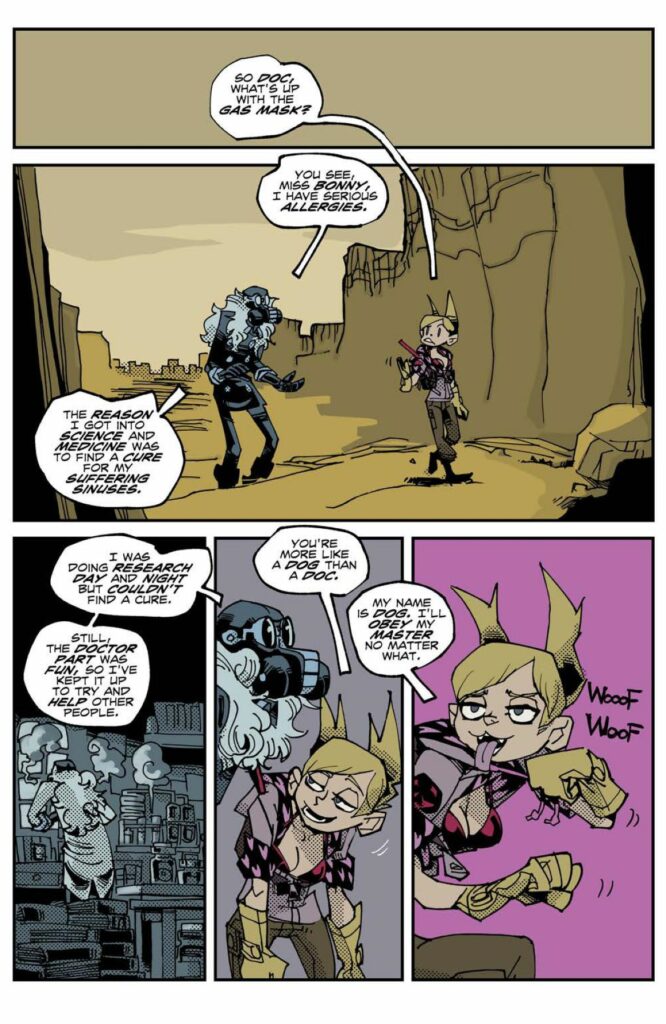 Piyotycho’s cartooning is the main attraction here, and the book gives him plenty of room to flex his stuff. His characters are spindly and angular, the main points of focus being their oversized heads and hands. Said hands are always gesturing, many panels dominated by gesticulating hands and exaggerated facial expressions. Backgrounds are often simple and rendered in monochrome, keeping the focus on the cartoon acting of the main characters.

Speaking of the coloring, colorists can run the risk of overpowering comics originally published in black-and-white, but Piyotycho wisely goes for a simple, “flat” approach, leaving the shading to his use of zipatone. The colors he uses most are those associated with his main heroine, backgrounds rendered in the same pink, tans, and grays of her outfit. It gives the book an easy to understand color language, helps the cartoony, exaggerated tone, and keeps the characters as the book’s main focus.

As for Erik Klaus’ lettering, he’s left with the unenviable task of redrawing all the sound effects in English. And a book starring a heroine with a crowbar won’t be quiet. But all the “Bam’s” and “Thump’s” are rendered in hand-drawn bubble letters that quake and wobble to sell each sound. All do a great job of replicating the original effects in English, and end up feeling like a natural extension of the art.

Bonyeer the Aromatic #2 is a simple premise done right, and a great showcase of what makes Piyotycho’s art worth paying attention to. It’s out today from Keenspot, so pick it up and give a more offbeat book a shot.

Bonyeer the Aromatic is an irreverent journey through a zombie-infested Death Valley starring two outcasts with serious medical problems. At least one of them is a doctor. Of sorts.Review: Pie-Induced Panic in BONYEER THE AROMATIC #2