Review: Paradise Is Lost In X-FORCE #1`

The most gripping "Dawn of X" spin-off shatters the illusion of Krakoa.

In Marvel Comics’ X-Force #1, (on sale November 6), writer Benjamin Percy unravels the utopia Jonathan Hickman has crafted throughout “Dawn of X.” Beneath the surface of the idyllic fade of Krakoa stands a nation that’s as flawed as any other, if not more so.

Percy shows there’s no such thing as a true paradise, both by exploring the dark side of Krakoa’s new freedom and shattering the illusion with a devastating cliffhanger. To do so,  Percy quickly captures Wolverine’s genuine voice. Maybe more than any other character, Logan would be one of Krakoa’s most cynical residents. He’s lived a long, hard life, so he knows better than to blindly accept a supposedly perfect solution to mutantkind’s problems. Early on, a conversation between Beast and Wolverine emphasizes this character trait.

Percy’s ability to depict Logan as we know him is immediately evident when Wolverine saves Hank McCoy from a mysterious monster in a meadow. Beast asks Logan to let the creature go because he wants to study it. Wolverine, jaded as always,  reminds McCoy that there’s a predator in every meadow. He also criticizes McCoy and the others for their naivety; “That’s what Krakoa does,” Logan says. “Makes everyone feel safe. And when you’re safe, you’re soft.” This conversation is an early indicator of Percy’s mission to interrogate the notion of paradise and the consequences such a place can cause. Later, when one of the X-Men’s most beloved members is gunned down, Logan’s words ring particularly true.

As eye-catching as the assassination is, Percy plants the seeds for a mystery even more compelling. In the first scene, we see a secret meeting of a menacing organization that could give the Court of Owls a run for its money. All the members are wearing matching masks and the group’s leader demands that they all prove their loyalty by allowing their blood to be tested. He vows to “scrub away” anyone who has the X-Gene. Hearing about this cult meeting would be off-putting enough but the art team makes it the most unsettling moment of the story.

On the first page, the group’s leader calls his demand for blood a “purity test.” Here, artist Joshua Cassara isolates the character and he’s set against a black background. To boost the creepy factor, color artist Dean White sprinkles in red globes to foreshadow the leader’s bloodlust. When a Bane-like minion discovers the identity of Domino, an undercover attendee of the meeting, the moment becomes even more forbidding. 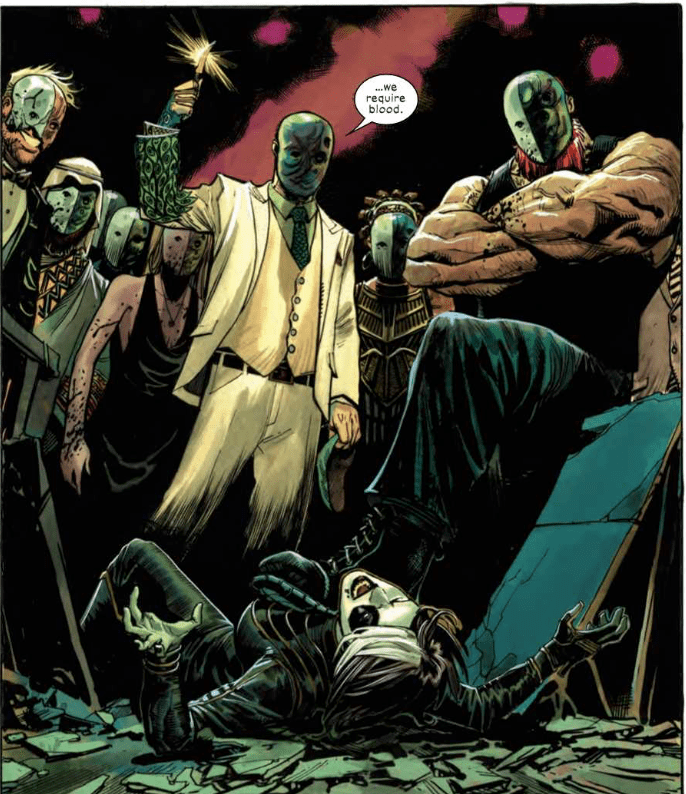 Cassara shows Domino’s best efforts in battle in a packed panel where she fights numerous cult members. But she succumbs to the group’s numbers advantage when a brutish goon slams her through a table. Using perspective, Cassara shows the cult members standing over a fallen Domino and you know her night’s about to get a lot worse.

X-Force #1 doesn’t blatantly bring the team together but it organically sets the stage for its formation. Of the various “Dawn of X” titles, it might be the most intriguing because it subverts the widespread idea that Krakoa is a perfect safe haven for mutants and we can’t wait to see where Percy goes from here.

What’d you think of X-Force #1? With the death at the end, is there more than meets the eye?

X-Force #1 is a deconstructive slow burn but the ending will make you want to stand up and shout.Review: Paradise Is Lost In X-FORCE #1`