Review: Overman Fights For The Reich in FREEDOM FIGHTERS #6

During World War II, the Freedom Fighters fought against the Nazis to try and stop the Reich. Just when they appear to win, the Reich revealed a metahuman of their own: The Superman of this world. Dubbed Overman, the Kryptonian was able to overcome the Freedom Fighters and helped the Nazis take over the world. Decades pass and the Freedom Fighters bring Uncle Sam out of his dimension to face the Nazi party of today. When he was revealed to the world, however, the Fuhrer requests to reawaken Overman. Has Uncle Sam returned just to be defeated once again? 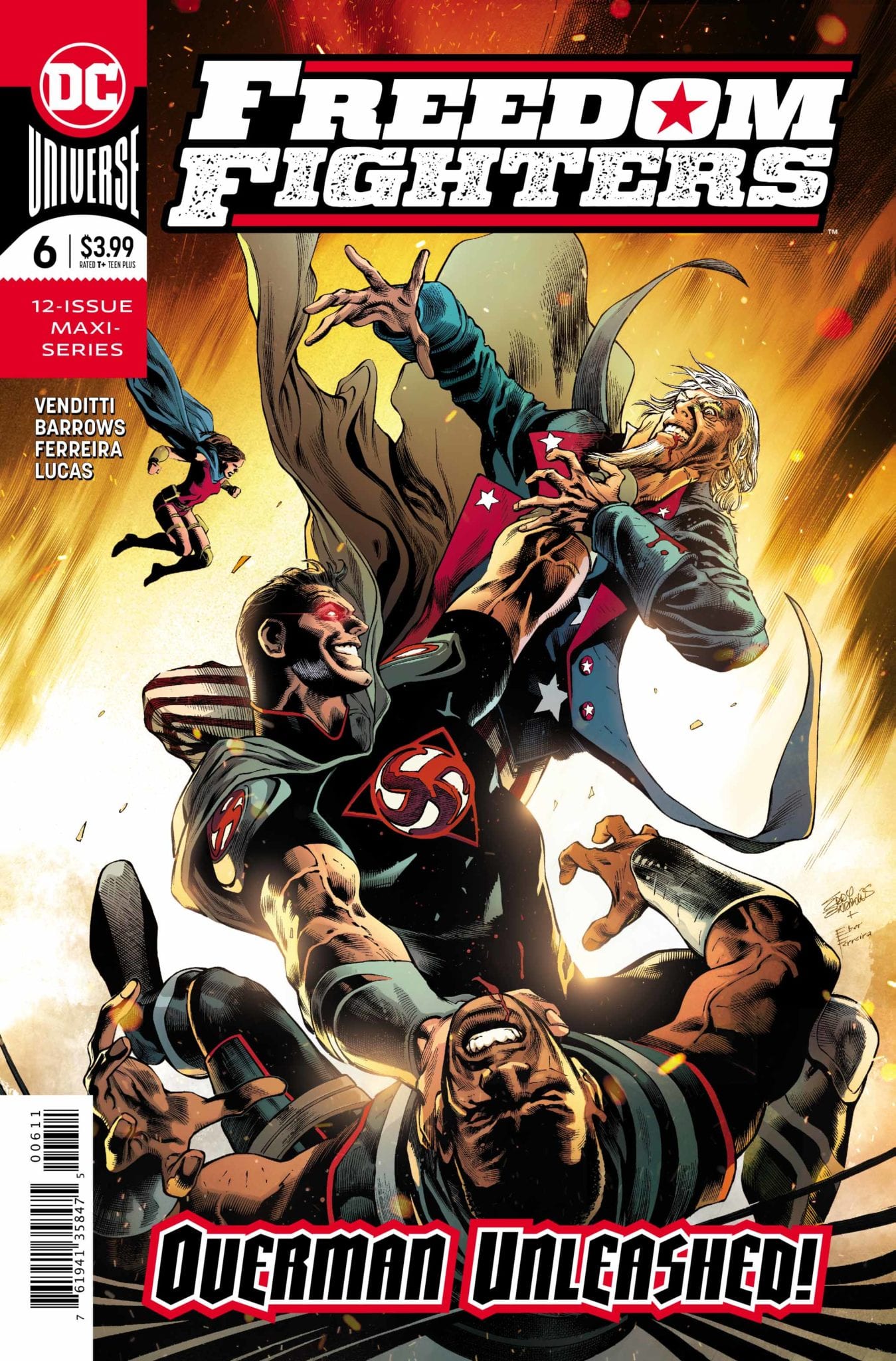 We open the story with the Nazis awakening their greatest weapon, Overman. He doesn’t say much but smiles at the fact he gets to help his Reich. Overman takes off to find the Freedom Fighters, who are handling a relic of their own. Uncle Sam is out cold after his explosive return, and the Freedom Fighters have no idea what to do with him. He eventually wakes up and gets up to speed with his new team. It turns out they were trying to bring him back for a while, referencing the events of the Multiversity: Mastermen comic. Before they can get comfortable with their new teammate, however, Overman finds them and attacks. 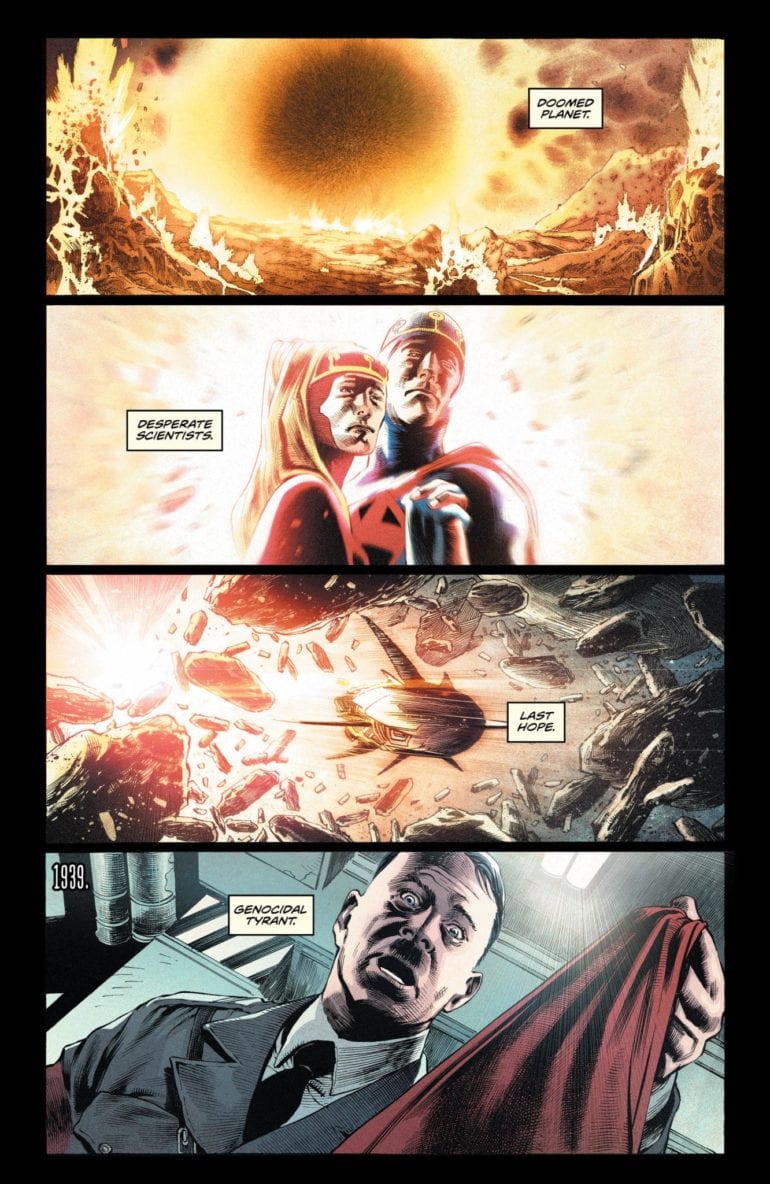 Halfway through the series and the epic story shows no signs of stopping. This issue has badass action and extreme tension. It’s very rare to get comics that have readers on the edge of their seats, but Freedom Fighters has been able to do it time and time again. This time around the threat of Overman and, as expected, he brought a whole new level of terror and action. There was even a twist in the middle of the story that had this reviewer’s jaw hit the floor. The only problem with the issue, however, is the fact it doesn’t precisely align with Mastermen. It’s just a nitpick to a fantastic comic, and it shouldn’t stop readers from taking a look themselves.

The world of Freedom Fighters continues to look as amazing as it is grim. The battle between the team and Overman is the best-looking fight I’ve seen in a while. From the illustrations to the colorwork, this comic never stopped impressing. The best page is hands down the twist mentioned in the story section. The moment the reader saw the full-page spread, it filled me full of terror and delight. I love the look of this book, and I can’t imagine it with any other art team. 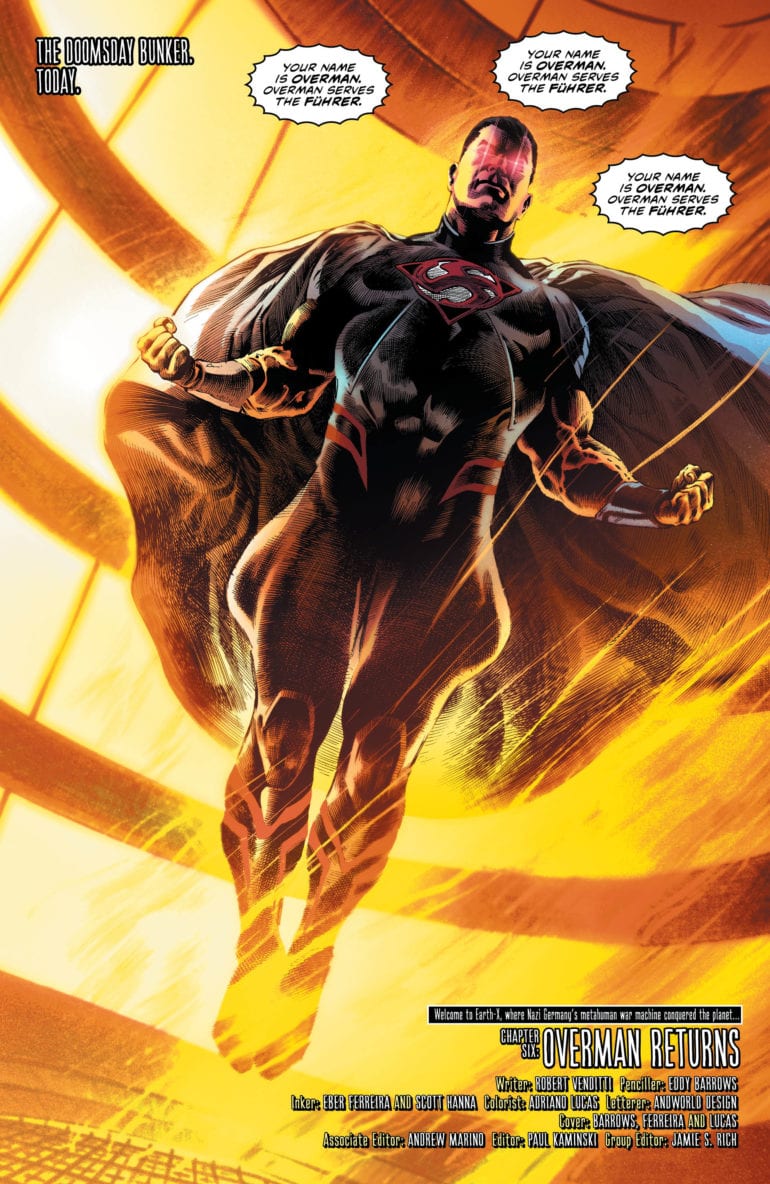 Freedom Fighters continue to be the underdog series that deserves to be in the spotlight. It’s gritty, action-packed, and just a fantastic time. Even with these giant action sequences, there is a finely written story woven in. I highly recommend this comic as well as the series.

The Freedom Fighters series continues to bring the action and suspense as Overman enters the fray!Review: Overman Fights For The Reich in FREEDOM FIGHTERS #6