Review: OUR ENCOUNTERS WITH EVIL is Classy Comedic Monster Horror

From the mind of Hellboy, creator Mike Mignola and writer/artist Warwick Johnson-Cadwell comes a new graphic novel steeped in folklore and classic monster myth. Our Encounters With Evil: Adventures of Professor J.T. Meinhardt And His Assistant Mr. Knox is a unique and intelligent monster tale steeped in literary tradition and comedy in a way that only Mignola’s imagination can offer.

In a story that follows the characters from Mr. Higgins Comes Home, Professor Meinhardt, Mr. Knox, and Mary Van Sloan set out on a series of monster hunts and misadventures. From chasing vampires in the Carpathian Mountains to being pursued by werewolves, the two inquisitive slayers meet a cast of strange and intriguing characters both villain and ally in their quest against creatures of the night. 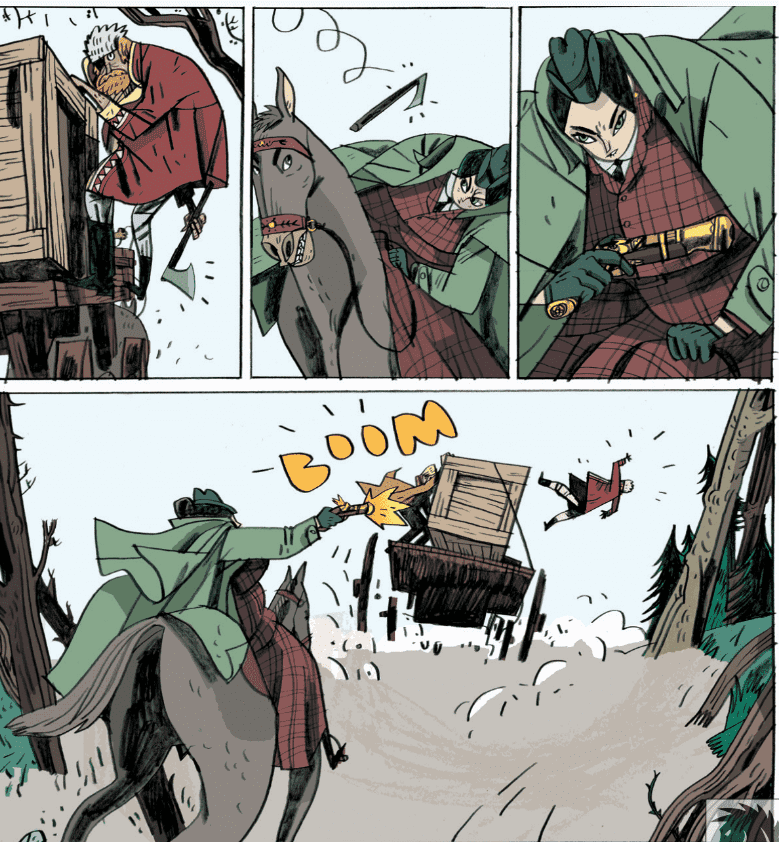 Mignola has once again imagined a brilliantly unique yet somewhat familiar supernatural landscape with lore pulled from European and literary mythologies. Instead of Lovecraftian monstrosities or undead Russian wizards, Meinhardt and Knox hunt down good ol’ vampires. This story pulls heavily from classic literary works like Bram Stoker’s Dracula, Sherlock Holmes, and even Joseph Conrad’s Heart of Darkness. The concept and world may wear its influences on its sleeve, but it’s handled in such a way that it’s just a treat to see how and where these influences manifest in the story.

While the concept and characters may belong to Mignola, Our Encounters With Evil is brought to life by the talents of Warwick Johnson-Cadwell. Cadwell’s writing here fits the “less is more” approach that Mignola books often have, leaving the bulk of plot development to take place visually. There are a couple of exceptions to this rule, one of these being a story told through journal entries and the other being the exposition points. Now, exposition can often be a bad word when it comes to writing, but somehow Mignola always manages to team with writers that know how to use it properly. There’s a sort of “sitting around the campfire and swapping ghost stories” vibe that Cadwell uses here. The hunters and the people they meet will often give one another information about ancient beasts through narratives of their own. While these may be information dumps in a sense, they’re delivered in such an entertaining way that it doesn’t really matter. 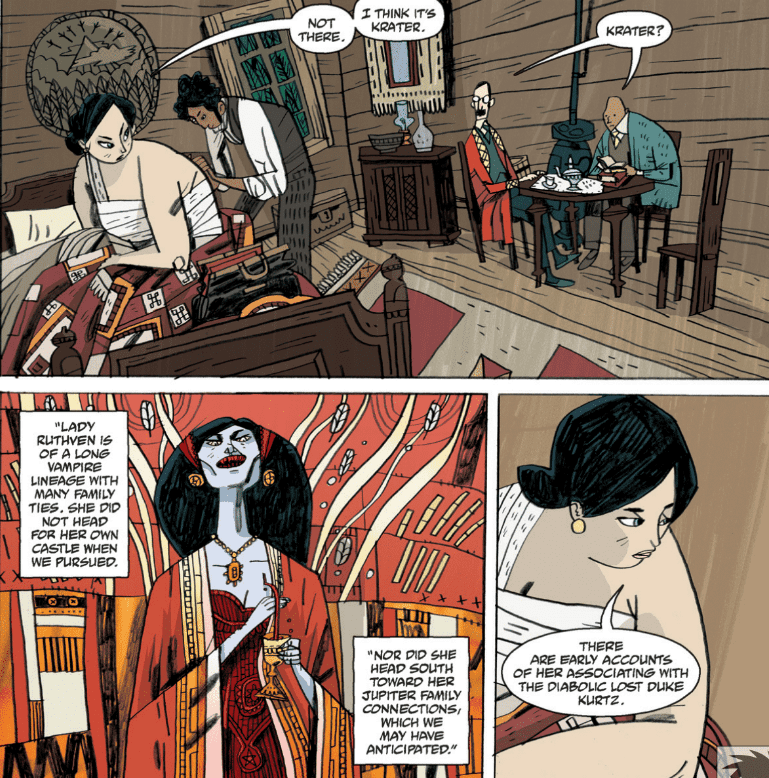 The real stars of the writing here are the humor and character work. Professor Meinhardt and Mr. Knox come across as intelligent monster hunters at the start. Competent, however? Debatable. Without getting into spoilers, the circumstances of their victories are so stunning and hilarious that it’s a wonder how these two have stayed alive for so long. Well, that wonder is likely due to the prowess of master hunter Mary Van Sloan, who works as the hyper-competent foil to the two leads. The way that Cadwell plays with romantic-era monster tropes and humorously turns them on their head is this novel’s crowning achievement. While spooky at times, the clever humor lands on all fours throughout the book. 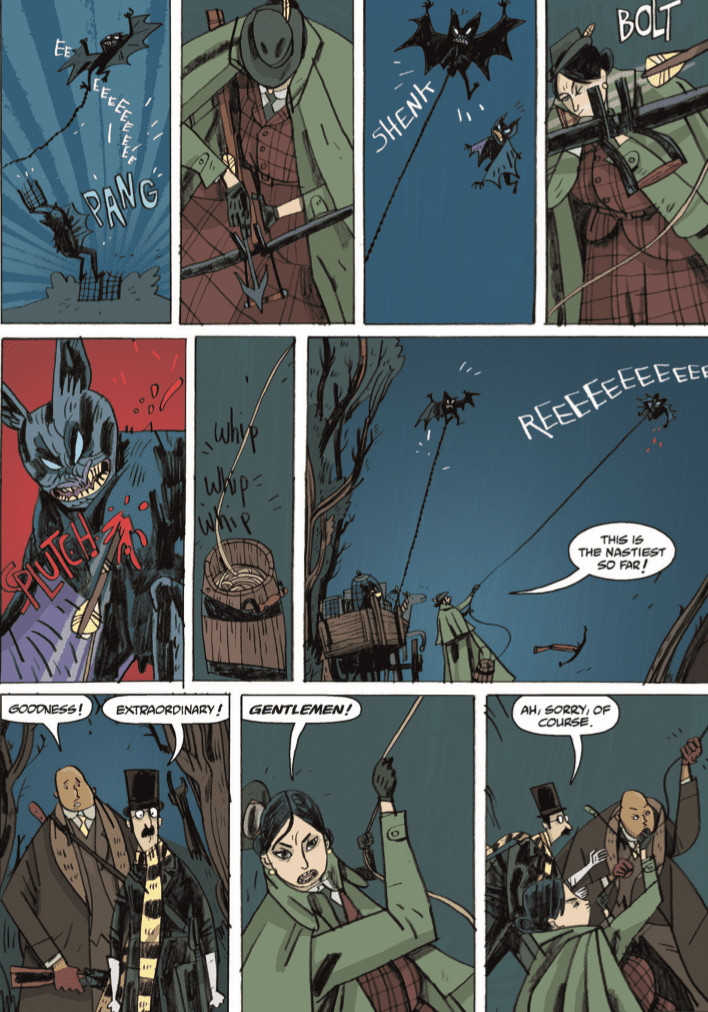 Cadwell’s art is pitch-perfect for anything with Mignola’s name on the cover. Artists that work on Mignola’s books always have an intriguing and strange style that works alongside Mignola’s own work, and Our Encounters with Evil is no exception. The simplistic yet effective visuals give the story its “spooky and strange” aesthetic while also being a great vehicle for the visual humor. Even the sound effects are given over to Cadwell’s unique vision, blending in perfectly with whatever chaos is happening in the panels without contrasting with the overall tone. Clem Robins’ handles letters and does so with sharp attention to stresses during dialogue. Bold and irregular letters set the mood during fights or panic. The real highlight is the authentic look of handwritten journal entries near the end of the story.

Our Encounters With Evil is an endlessly clever and surprisingly hilarious horror graphic novel. Mignola and Johnson-Cadwell have created a story that derives influence from literature and mythic monsters of old, and still stands on its own as a unique creation. Any fan of Gothic horror, classic monsters or even just witty humor are in for a definite treat when this book hits shelves on November 13th.