Review: Nothing in FUTURE STATE: SUICIDE SQUAD #1 is as it Seems

Writer Robbie Thompson, artist Javier Fernandez, colorist Alex Sinclair and letterer Wes Abbott get the party started in DC Comics’ Future State: Suicide Squad #1. Future: State Suicide Squad is this creative team’s excuse to bring all the deep-cut characters we want to see out of the woodwork! Even the big players we’ve seen before, like Brainiac and Sinestro, aren’t quite how we remember them. And writer Jeremy Adams, penciller Fernando Pasarin, inker Oclair Albert, colorist Jeromy Cox and letterer Wes Abbott bring about their own terrifying future in the second part of this double feature, DC Comics’ Future State: Black Adam #1. Both stories enjoy plunging the reader into mystery and keep us guessing what’s going to happen next.

Thompson does a fantastic job of keeping readers confused. It’s an exciting confusion, one that peaks your interest and gets you on the edge of your seat. The great thing about DC Comics’ Future State, is that it skips any number of years to get to the stories we’re seeing. Thompson has us worried about what’s happened to get us to the future he presents. We find ourselves rooting for Brainiac and scared of Superman. Thompson provides what information we need to connect some dots through captions. Occasionally, characters like the Flash walk us through more than we need. But these moments are brief and Thompson saves the biggest, most jaw-dropping revelations for last. 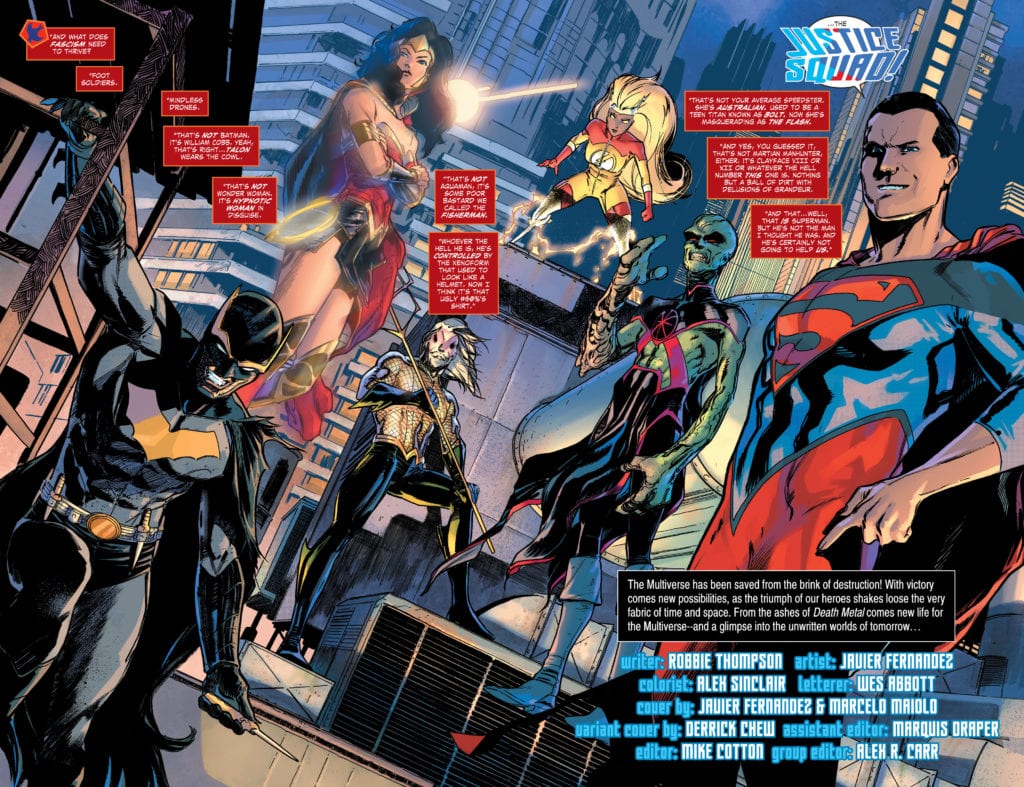 Fernandez’s art somehow manages to be both dark and fun at the same time. In fact, he moves past a lot of the violence and darkness in a way that accentuates it. Fernandez creates a sterile environment. The violence is happening, but it’s minimized and glossed over. This is an atmosphere that’s used to gore, so Fernandez doesn’t make bloody moments look like they’re worth noting. One character’s hand being severed happens small, almost bloodlessly on the page. And as they plummet to the ground, we get even less of a sense of the gore. The scene quickly gives way to a smiling enemy, standing over them. Only once do we focus in on blood pooling on the ground. But it’s momentary, and the next image is that of our “heroes,” looking ready for action. Every bloody moment is actually underlined by the very fact that Fernandez practically ignores it.

A lot of Sinclair’s colors seem somewhat muted. There are moments of brilliance though. Sinestro’s aura is eye catching in its brightness. Brainiac’s skin is a fantastic green, and the panels all over the page with Brainiac’s coding are a deep purple. Sinclair seems to be showing us that these aren’t the characters as we’ve known them. They’re not the brooding villains, they’re the bright heroes. The Justice Squad, on the other hand, may look like our heroes, but their coloring is slightly dulled. The only scenes with them that have bright colors are the moments they’re being pulled into line by their ring leader. She can push them around with flashes of light and the push of a button. Sinclair is showing us the power of each character. Some, given the opportunity, have the power to change the world, others have the power to control everything. The Justice Squad, however, only has the power to follow orders.

When Amanda Waller makes her appearance, she flexes her power. Every speech she has, every line, takes up as much space as possible. Abbott stretches small paragraphs into five word balloons. Some of the word balloons have as few as a single word, separated from the rest of the dialogue. Waller has everyone’s attention and she loves it. Other characters talk quietly in her presence. Their font is small and grey. She commands a room and no one dares to try and challenge her authority. 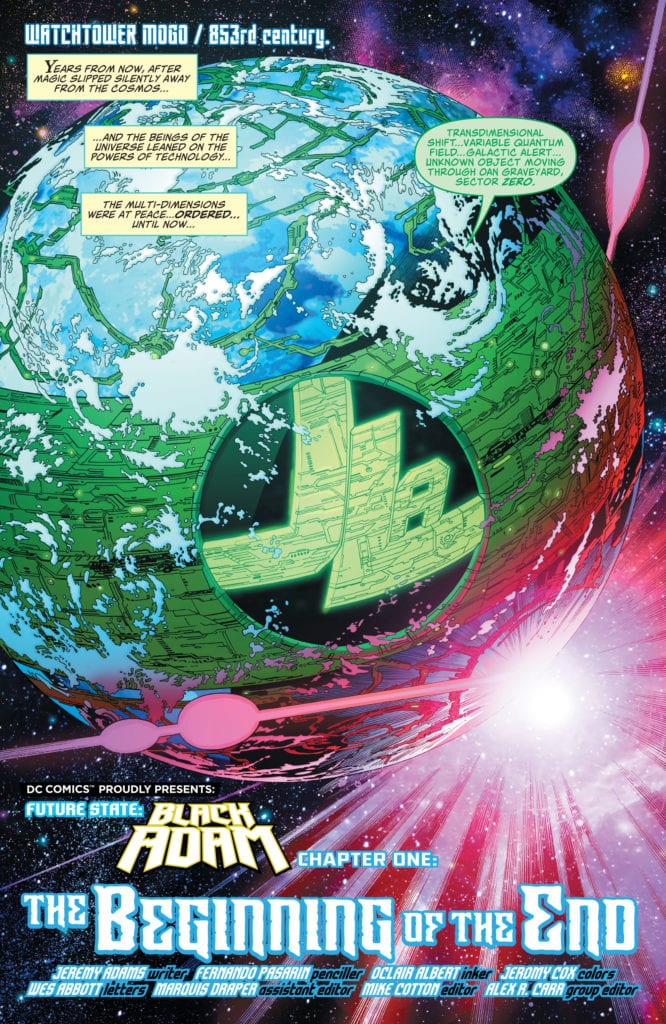 Adams’ tone in Black Adam is almost scriptural. He uses phrases like “to bring the end of all things.” It’s poetic language that treats the story like an epic. When introducing characters, Adams’ uses title cards with brief descriptions. Even this reads almost like a genealogy from the Bible. Adams uses this approach to communicate the seriousness of the situation. Everything is ending, the universe is dying. At times, Adams does allow his story to take itself a little too seriously though. The melodrama of it all occasionally makes the stakes seem too big to process. But Adams actually works against this in the final page. He introduces one last character to help bring everything a little more down to earth.

Pasarin and Albert certainly follow Adams epic style. Every moment is large and earth shattering. Black Adam’s face is often full of terror and his enemies’ eyes show unadulterated evil. Pasarin and Albert keep things amped up. There aren’t many lulls between the splashy entrances and the fist fights. It also gets to be a little much at times. But Pasarin and Albert still make it look incredible. Our introduction to the Unkindness, a league of futuristic villains, is spectacular. And just like the final page brings Adams’ writing down to earth, it brings some needed levity and nonchalance to Pasarin and Albert’s art. 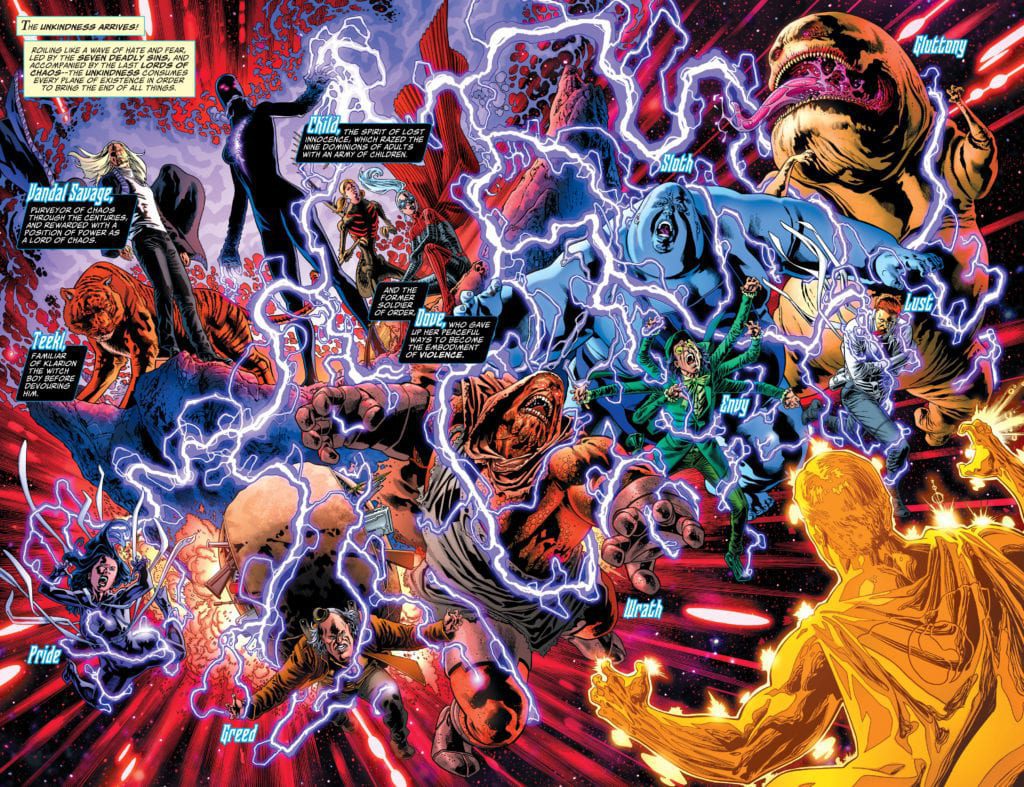 Cox highlights what’s at stake with his coloring. While the Unkindness is certainly flashy, they’re still somewhat monochromatic. They each have a purple hue. But the worlds that the Unkindness are decimating are full of color and life. And Cox shows what Black Adam must leave behind if he’s to help save the universe. The world he lives on is green, with pockets of gorgeous reds, blues and yellows. It’s a paradise. And when the Unkindness’s chaos arrives, the panels are drained of color. Everything is grey and dull. Cox uses his coloring to show the immense influence the Unkindness has.

Abbott uses the placement of word balloons to show how a character is feeling in the moment. This is especially noticeable with Wonder Woman. When she’s facing a cataclysmic event, her dialogue goes upwards towards the top of the panel. It has a feeling of confidence. The heroes might be facing great odds, but that’s something she’s familiar with. But when she has to tell the rest of the team private details about her life, her word balloons sink to the bottom of every panel. It shows her fear. And later, as she speaks quietly to Black Adam, her words stretch downwards again, but only slightly. This small shift of placement makes the moment feel gentle instead of scared. Through word placement, Abbott shows us how some characters feel more frightened of vulnerability than they do of supervillains.