The campaign that started it all is back in CRITICAL ROLE: VOX MACHINA ORIGINS III #1. Available in comic book stores on Wednesday, February 10th, this issue details the next chapter of Vox Machina’s adventure. The setting is Westruun, a bustling town that’s become familiar with the adventurer’s exploits. Coupled with a massive amount of coin acquired from their most recent client’s mission, will Vox keep their egos (and money purses) under control?

Readers are brought along to Westruun with Vox, which features a cozy tavern where the group agrees to pick up and spend their earnings. Some, like Scanlan, express joy at just the fact that the team is celebrating Winter’s Crest with ale and friends. Unfortuantely, we also see the eccentric group blow through the earnings almost immediately, forcing them to seek out another source of income. 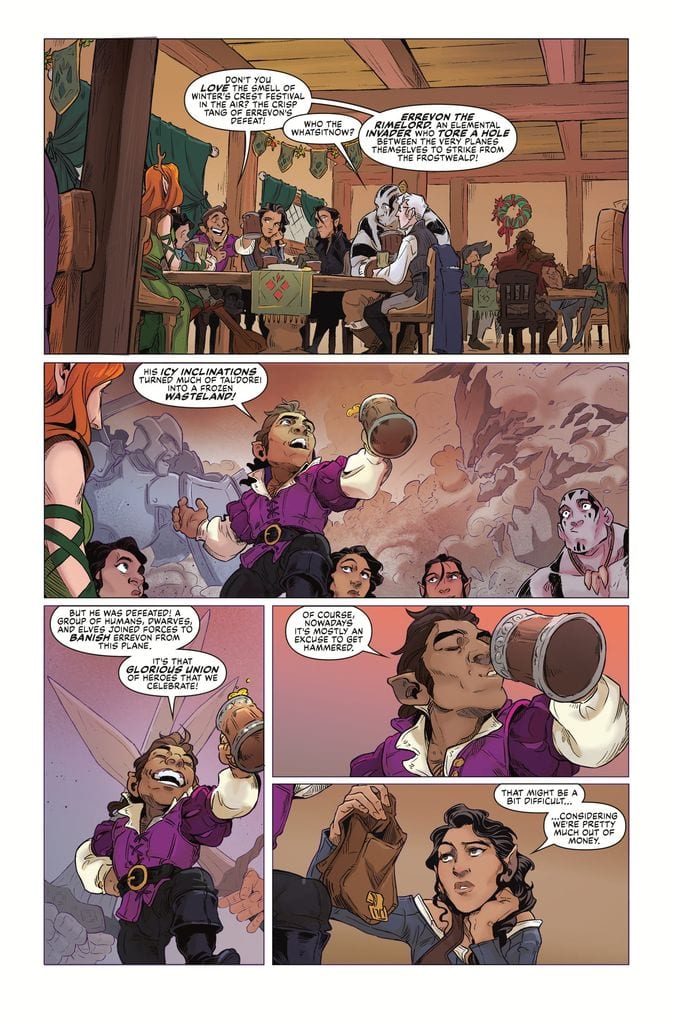 Fortunately, a potential source of funds comes in the form of a poor woman looking for her lost son. Despite the apathy of the local patrons, and many of the Vox members themselves, Keyleth opts to show mercy. 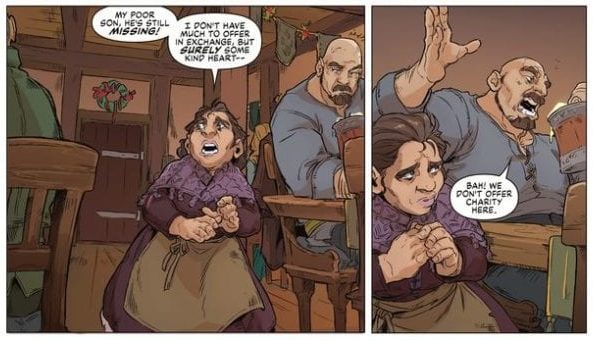 But before she can offer assistance, Grog gets into a fight with one of the patrons, which forces the team to leave the tavern.

It’s here that Vox’s next adventure really begins. After watching the goliath brawl, a mysterious figure named Kradin Grimthorne introduces himself, offering Vox a sponsorship in the Brawler’s League of Exandria.

Jody Houser’s narrative captures the distinct and often conflicting personalities found within Vox. Readers get a clear sense of the difference in characters like Keyleth and those closer to Grog; the former is in tune with those in need while the latter seeks battle more than anything. But rather than offering a judgement as to which is better, Houser’s commitment to characterization offers space for fans to identify with the characters that embody their own personalities.

We loved the immense amount of detail featured in this issue. Olivia Samson’s penciling and ink work offers fully realized illustrations of not only the protagonists, but the background characters as well. This helps readers immerse themselves in the world of Critical Role. Coupled with Msassyk’s coloring, these images pop off the page with pleasing colors that work well together. It was also great to see letterer Ariana Maher’s use of various large fonts to represent environmental noises. These various elements meshed together effectively to create a harmonious issue.

CRITICAL ROLE: VOX MACHINA ORIGINS III #1 kicks off the next Vox adventure with an engaging story. We’re excited to see how the adventurers fair in the upcoming brawling tournament.

Do you think Vox stands a chance against their opponents in the Brawler’s League? Let us know in the comments below!