Norse Mythology #5, out now from Dark Horse Comics, tells one of the most heartbreaking Norse myths that is brought to an entirely new level through clever layouts and magnificent art. 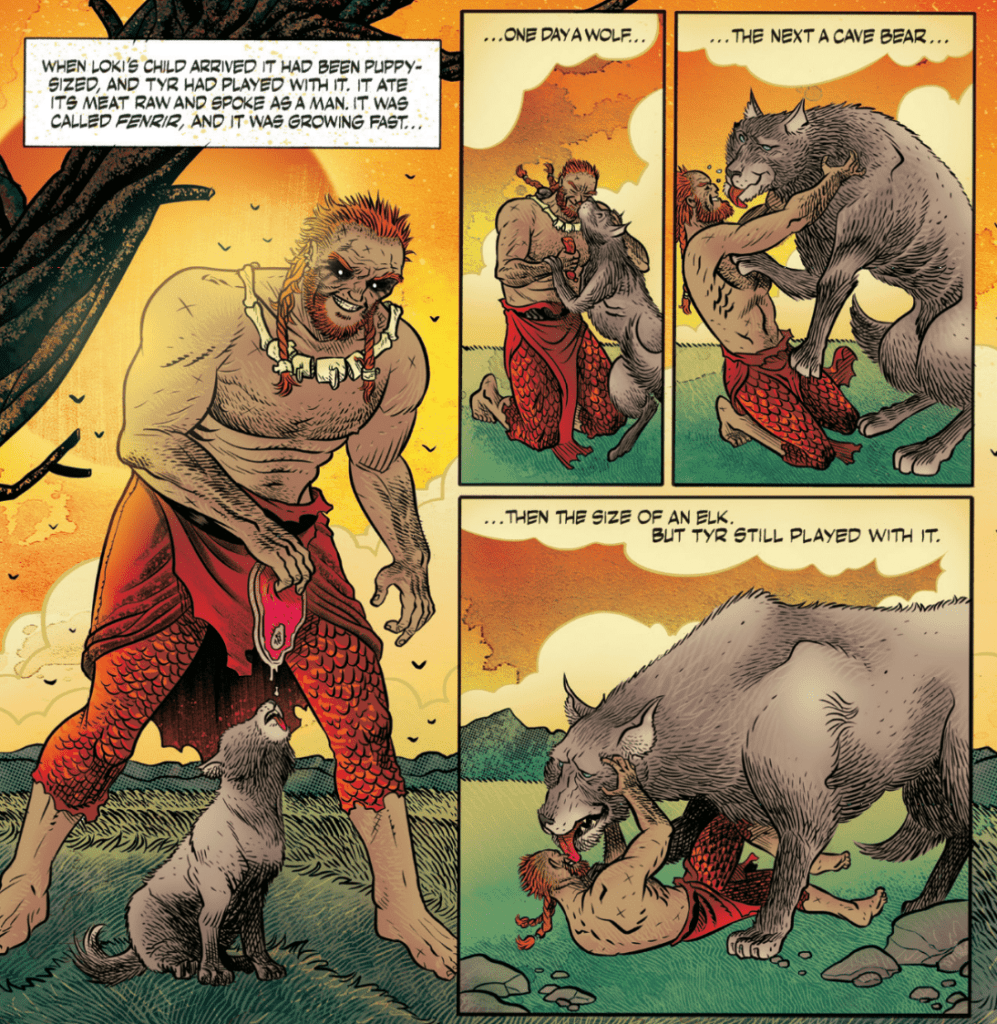 P. Craig Russell’s script and layouts — based upon the stories told in Neil Gaiman’s novel — for Norse Mythology #5 are breathtaking. Russell uses silent panels to build suspense, such as in Odin’s dream about Fenrir, the wolf. There could have been captions and vicious action, but instead, the lack of dialogue or captions gave the dream an eerie and spooky feel that has a more lasting impact on the reader. Russell also uses the technique of breaking up a single motion into multiple panels, which essentially slows the flow of time and adds tension to a scene. The issue features two stories: “Loki’s Children” and the other “Freya’s Unusual Wedding.” All of the story of “Loki’s Children” is contained within the issue, leading to a satisfying beginning, middle, and end. The choice of story is superb, as this Norse tale has heartbreaking emotional beats that keep the reader engaged. “Freya’s Unusual Wedding” is an excellent beginning and not much else. The story is cut off and will be continued in the following issue, but so little of it is contained within Norse Mythology #5 that I see little reason that it is tacked on after the previous story. I understand that it gives readers a cliffhanger that urges them to purchase the next issue. Still, I believe that providing the reader with a self-contained story would better urge the reader to pick up the following issue due to Russell and Gaiman’s incredible writing abilities. “Freya’s Unusual Wedding” seems misplaced in this issue, but this is a minor detail, and the story is a strong start. 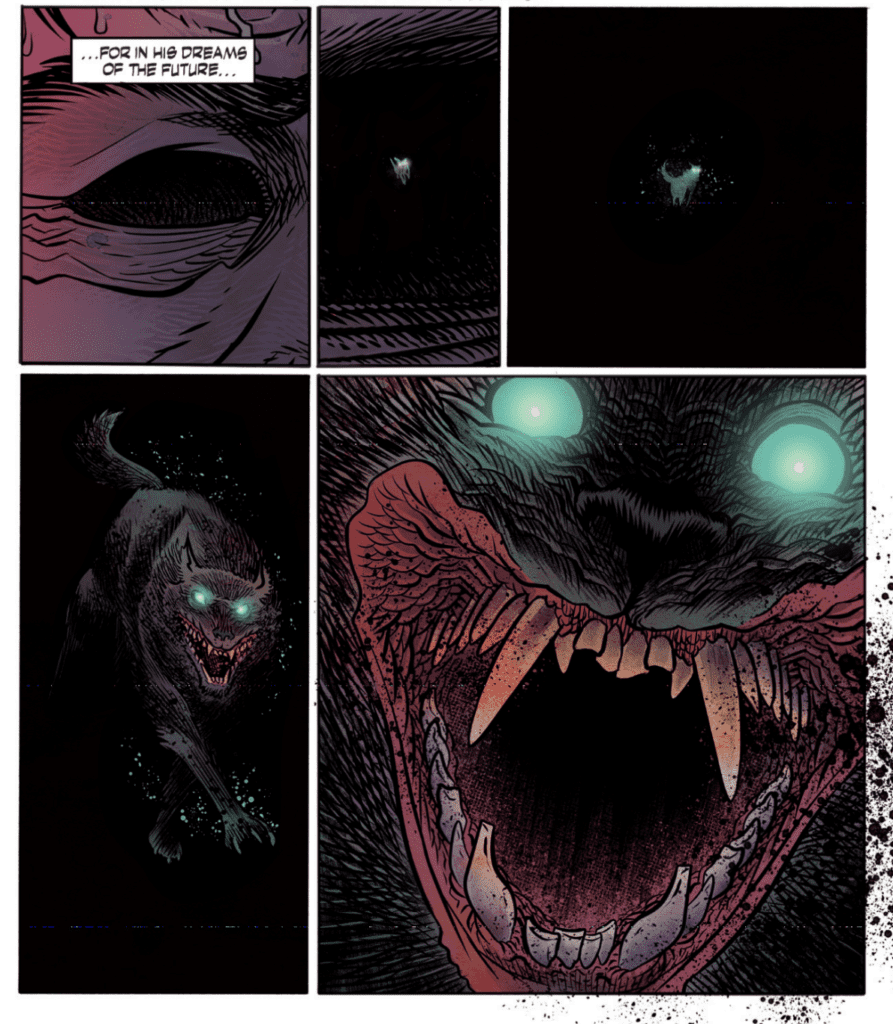 The first story of Norse Mythology #5, “Loki’s Children,” featured art and colors from David Rubín, who draws the reader in on every page. There are so many things to say about his work on this issue. His art for Fenrir is incredibly vicious-looking. He possesses an extraordinary ability to create gruesome art, the method of making objects such as the chains Fenrir breaks shoot out past the panel’s border is highly effective at immersing the reader in the moment, and character facial expressions are perfect and make silent panels all the more impactful. There are few negatives things that anyone would be able to say about Rubín’s work.

Jill Thompson’s art and colors in “Freya’s Unusual Wedding” is impeccable. The use of bright colors and her watercolor style cements the idea that the world we are seeing is full of magic. Thompson can also be very intricate with her backgrounds, which makes the fantasy realm more believable. 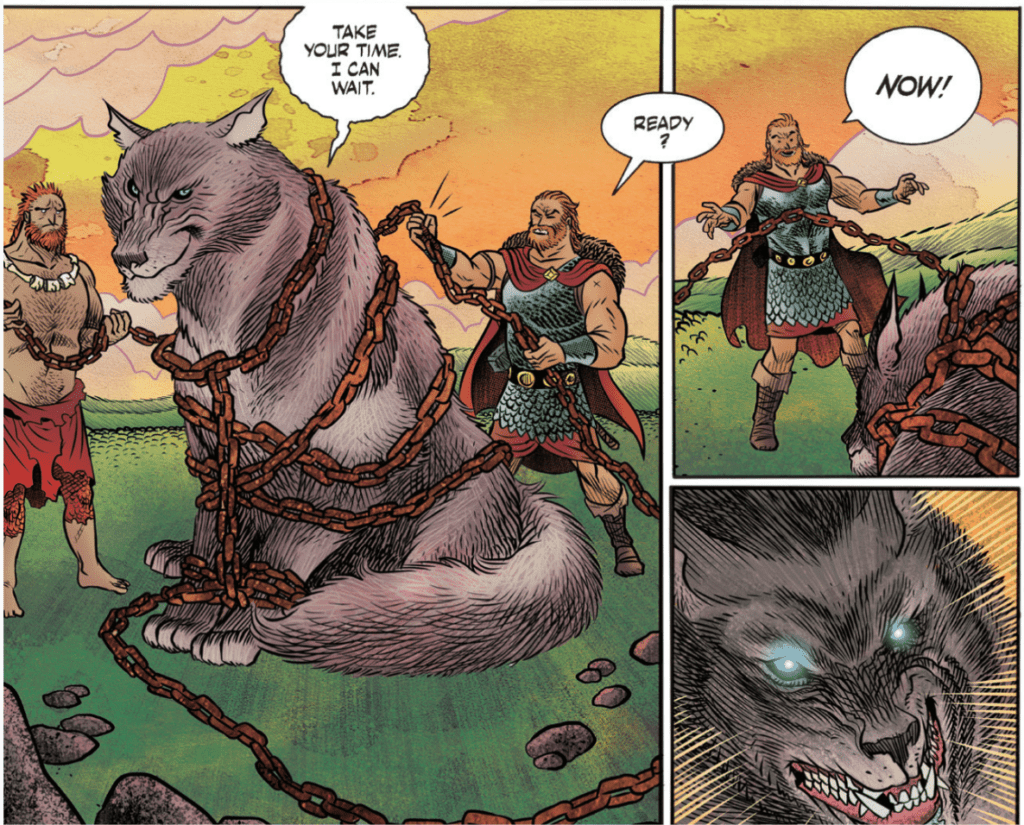 Galen Showman’s lettering in Norse Mythology #5 helps emotional beats land a harder punch. There are so many exciting choices that Showman makes in the issue, all of which help improve the story. For example, when Fenrir breaks through the chains that bind him, his speech bubble contains a bold, colorful font. This makes clear how powerful the wolf is becoming and makes the moment more shocking. Showman also uses techniques such as no border around narration, extending speech bubbles past panel borders, and a disposition between the style of lettering and the scene behind it. The issue undoubtedly contains some awe-inspiring lettering.

Norse Mythology #5 is an issue that will leave you in awe and have you desperately waiting for the next issue. The storytelling is so enthralling that it’d be hard to put the issue down once you have picked it up. Rubín and Thompson’s art is just astounding, and creates a spectacle on each page, and Showman’s lettering is the final polish that makes the issue an unforgettable read.

Norse Mythology #5 is one of the best issues in the series, featuring amazing art and a story that is sure to tug on your heartstrings.Review: NORSE MYTHOLOGY #5 - The Heartbreaking Tale of Fenrir