Norse Mythology #3, out December 9th from Dark Horse Comics, is the beginning of another classic story with many of your favorite gods and an exciting series of events.

It is impossible to dispute that the stories portrayed in this series are classics, and Neil Gaiman’s writing brings the ancients tales to life and makes them feel new. P. Craig Russel flawlessly transitions Gaiman’s retelling of the iconic stories to the medium of comic books so that it flows naturally and effortlessly pulls the reader in. I have never been well-versed in Norse mythology, so as someone who is experiencing many of these stories for the first time, I can attest that they are made to be gripping and wildly entertaining tales. The stories have a slightly more mature tone than children’s books. They are entertaining for older ages, but I could see this series resonating well with children a few years before their teens. I know I would be going absolutely crazy over this series at age eleven when I read every mythology-related book I could get my hands on. Norse Mythology #3 has a story that captivates readers despite little action and dialogue that flows perfectly. 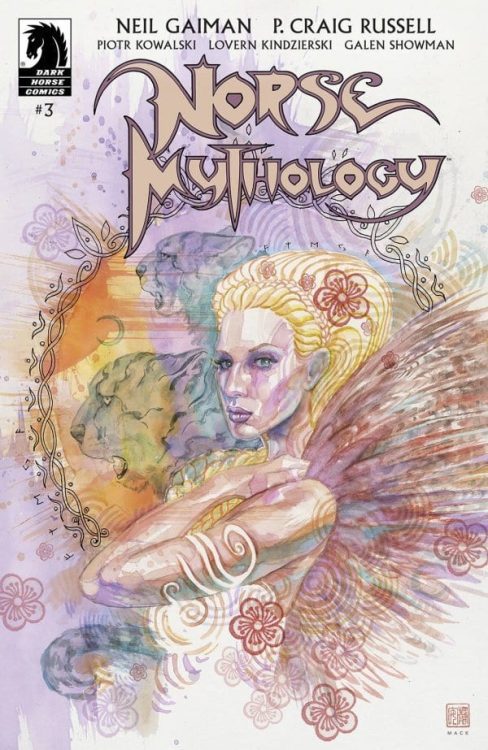 The art of Piotr Kowalski is incredible to look at. Norse Mythology #3 has minimal action, so the characters’ facial expressions and body language do the heavy lifting. Kowalski’s faces match perfectly with the dialogue presented, and it is evident when a character is hostile or discomforted from body language alone. Kowalski also did a phenomenal job with the highly detailed character costumes and backgrounds in the issue. It seems like every god or goddess in the issue is wearing some fur, chainmail, or jewelry with a surprising amount of detail. Thanks to the talents of Kowalski, all of these characters look amazing. The backgrounds of the issue — mostly the interiors of buildings in Asgard — have detailed stone walls with stunning shading. By nailing the finest of details, Kowalski can make the world of Asgard feel like a place that truly exists.

Norse Mythology #3 features the spectacular coloring of Lovern Kindzierski. The wondrous characters from Norse myth would be nowhere near as exciting without his work on this issue. Kindzierski uses a broad color palette for his characters and settings, which quickly establishes a fantastical tone for the world. It makes you feel like you’re taking a small glimpse into a vast and complex world, which is a great feeling to be getting across for any fantasy tale. Kindzierski also uses the technique of single-colored backgrounds to his advantage. This is done in some cases to add energy to a panel. A warm color like yellow adds to the ferocity of a character in a panel and helps the emotion come across clearer. It is also used to help a character stand out, even if an intense emotion does not need to come across. This is done with cool colors that contrast the bright style of the book’s characters and helps aim all attention to the character on a panel.

Galen Showman provides some stunning lettering that helps make Norse Mythology #3 such a riveting read. For example, Showman often includes speech bubbles that don’t have words. This may seem strange at first, but a word bubble with an exclamation point or a spiral is an effective way to portray sounds people make without creating onomatopoeia that attempts to express the same emotion. Showman also uses alternate speech bubble borders and background colors to help express emotion in a character’s dialogue and uses intriguing fonts for action panels that require sound effects. In all, Showman provides some mesmerizing lettering in the issue.

Norse Mythology #3 helps cement how this series is one of the most enjoyable and accurate ways to portray classic mythology. The writing of the issue is simple yet flows well, and the art complements the story extraordinarily well. For any fans of mythology, I could not recommend this series more.

Another exceptional issue that helps cement this series as one of the most exciting and accurate portrayals of classic mythology.Review: NORSE MYTHOLOGY #3 - The Consequences of Mischief