Review: NORSE MYTHOLOGY #1 — A Brilliant Introduction to A Fantastic World

Norse Mythology #1, out now from Dark Horse Comics, is a seamless introduction to a mythology universe that many may not have encountered before.

About the Book:
In 2017, Neil Gaiman published his book Norse Mythology, which retold many of the classics stories with the flair of Gaiman’s writing while remaining true to the original tales. P. Craig Russell has adapted the book into scripts for a new comic book series, featuring many incredibly talented artists. This may be the first experience in Norse folklore for many people, and it is an amazing place to begin.

Norse myths are not as prevalent as those of say, the Greek or Romans. The only exposure they have had to Norse mythology was through Thor comic books or movies for most people. These obviously take many liberties, so Norse Mythology #1 is a wonderful way to take in the classic stories. Gaiman and Russell present the myths to the reader in a sequence that makes it very understandable and easy to follow. They don’t bombard you with too many characters or places at once, and everything that is introduced is given enough time and description so that it is easier to remember. 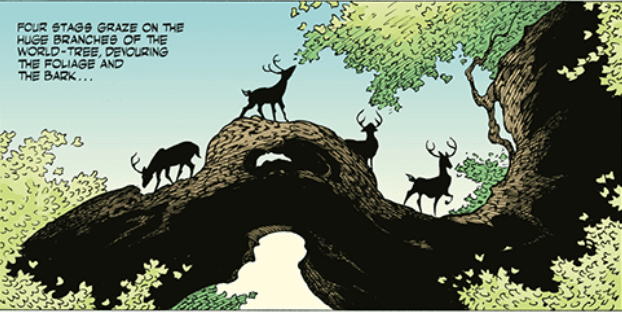 Norse Mythology #1 features three stories, which each serve a purpose in the narrative. The first story, “Yggdrasil and the Nine Worlds,” is a story that takes us all over the many settings of Norse mythology and introduces the reader to the many new places the following stories will be taking place. It informs the reader about the tree of life, a dragon, and the Norns, but there is no real story to this first section. Instead, it is a wonderful introduction that leaves you in awe of all the fantastic places within the world of Norse mythology. “Mimir’s Head and Odin’s Eye” is a story of Odin’s past and acclimates the reader with the style of events in this new world. The final story, “The Treasures of the Gods,” is about Thor and Loki, and is the beginning of a tale to be later continued. This leaves the reader wanting to know how the story ends and provides a basis for what future stories might be like.

“Yggdrasil and the Nine Worlds”

P. Craig Russel also did the art for the first story of Norse Mythology #1, and he does a fantastic job of showcasing the many diverse locations in Norse mythology. Russel’s characters are sometimes portrayed with very little detail, even when their scenery is very intricate. This is a phenomenal way to portray a character as ominous since they now appear to the reader only as a figure.

“Yggdrasil and the Nine Worlds” features page after page of vibrant colors, painting the many worlds of Norse mythology in a beautiful light. Through Lovern Kindzierski’s color choice, the first look at the Norse myths’ world provides a lasting impact on the reader and draws them into the fantastic world.

Mike Mignola’s art adds a lot to Norse Mythology #1. His figures are straightforward most of the time, and Mignola makes heavy use of shadow. The shadows reflect the tone of the story and provide an interesting stylizes look throughout the story. 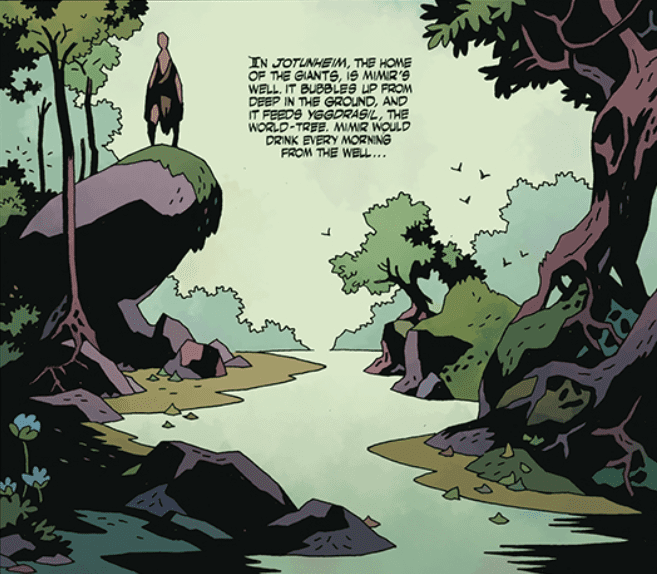 Dave Stewart’s coloring choices for “Mimir’s Head and Odin’s Eye” are much darker than the previous story, reflecting this tale’s tone better. This choice also has the added effect of having things such as blood draw more attention because the bright red contrasts heavily with everything around it.

“The Treasures of the Gods”

Jerry Ordway provides a wonderful visual experience in Norse Mythology #1. All of the characters have such detailed faces that are incredibly expressive, and it is evident that so much care is put into every panel background. Ordway gives us an aerial view of mountain tops, panels full of splintered wood, and even intricately detailed stone walls. Ordway’s rendition of Loki is also impeccable, and it is easy to tell how mischievous he is simply through facial expressions.

Lovern Kindzierski does another phenomenal job on the second story he colors in Norse Mythology #1, and his work brings the art of Ordway to life. The colors change throughout the story to reflect the tone of scenes, and the choice of bright, single-colored backgrounds for certain panels helps add energy to a scene and bring focus to a character’s actions. 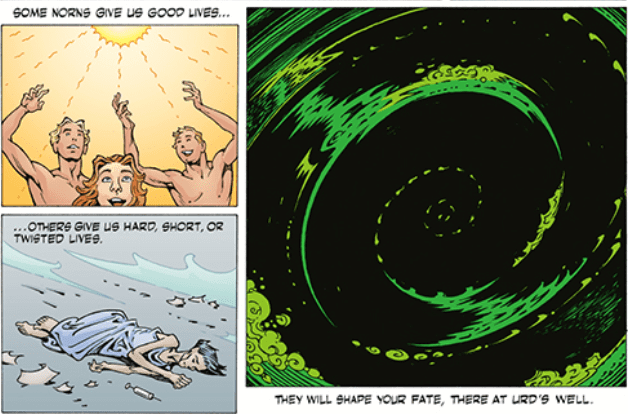 Galen Showman did the lettering for all of Norse Mythology #1, and his work was excellent on every page of the issue. Using unique fonts when a certain character is yelling or being shaken was very interesting to see. The choice to not have a caption box for words that describe the story is genius because it gives the reader the feeling that the words aren’t coming from someone narrating the story, but instead exist as just part of the world.

Norse Mythology #1 is a fantastic introduction to an enormous collection of myths that have been told for centuries. Even if you have had prior exposure to Norse myths or even read the original book by Neil Gaiman, this series is worth checking out for the beautiful portrayal of these timeless figures.

A deeply enthralling issue that is a beautiful introduction for anyone not familiar with Norse Mythology.Review: NORSE MYTHOLOGY #1 -- A Brilliant Introduction to A Fantastic World