Review: NOMOBOTS — Taking The Sides of Humanity In Strides

Nomobots is a series from Heavy Metal’s Virus imprint by writer Diego Agrimbau and artist Juan Manuel Tumburus. The first three issues have already been released on June 3, June 17, and August 26, respectively.

This is the story of Nadia, one of the last humans in Sileo, a city where Nomobots (a particular kind of robot) rule and govern. She has escaped from a human farm and now she’s being persecuted by the Nomobot Police. Nomobots were created to avoid human extinction, they succeeded but there was a big cost: humans lost their freedom. Nomobots have a conscience, they love and hate, just like any human being, but their metal bodies don’t allow them to feel anything. There’s no pain or pleasure. Their complex minds need to feel. So some of them has mounted farms where human slaves, like Nadia, are submitted to every kind of stimulation, some pleasant, some degrading, some unbearable. These sensations are recorded and saved on capsules called Emopills, and later they are sold on Sileo’s street.

The Points of View of Nomobots 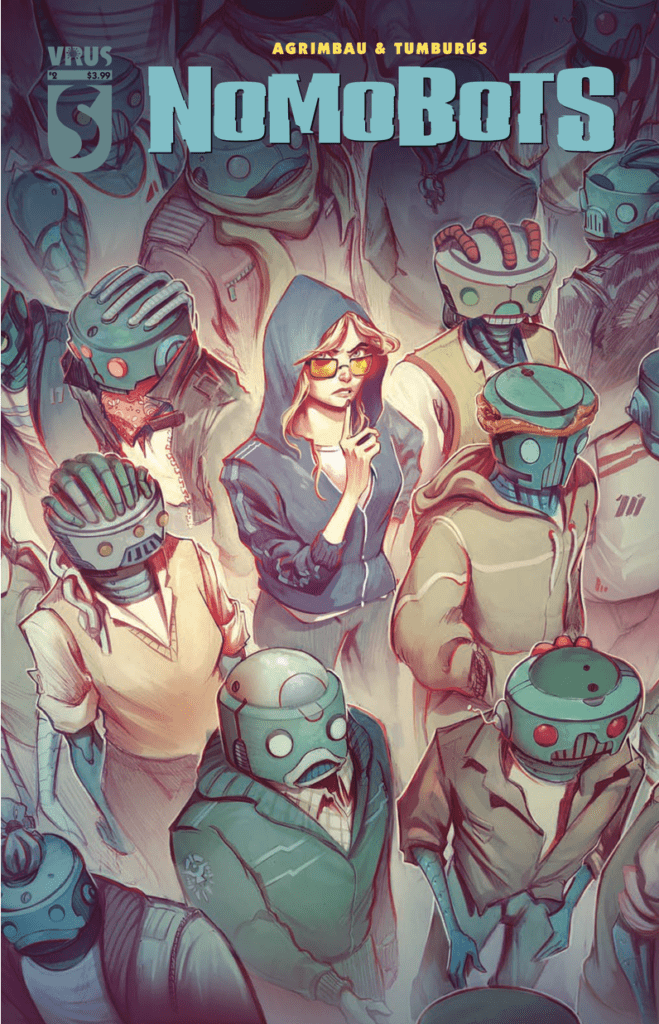 Agrimbau has each of the three issues of Nomobots follow the points-of-view of a different character. This allows the reader to view world through the robot characters instead of the protagonist Nadia. Because if they see it from her perspective, it’s just a typical post-robot uprising series like D4VE. Each issue begins quite literally in the heads of the focus character. This allows the robots to be more empathetic given how they can’t make facial features. The different perspectives show how much the culture around emopills and Nomobot immortality through backups effects the greater society.

Issue one focuses on Jimmy, who, after the psychedelic trip he has in the first pages, sets up the series and setting all at once. In it, the readers meet Nadia. As Nomobots can only act human, they need special pills to feel human sensations. Humans like Nadia need to enact these sensations so that they can be recorded on these “emopills.” Jimmy, after many uses of emopills, becomes attracted to Nadia. It’s hard not to feel bad for him when she hits him and another Nomobot with a monkey wrench in issue 2.

In issue 3, another Nomobot sees Nadia the way the audience might, a force of nature that could destroy Nomobots. Yet it’s not out of fear but reverence. Looking at this world where machines are addicts to sensations, it’s hard not to want it destroyed. But how do you fight something that’s so ingrained in the people’s culture? Especially when the culture has its own form of progressives and conservatives. That’s what undercover cop Rick has to deal with, which, given his abstinence towards the drugs, sets up the next issue nicely. I mean the guy dresses up as a stereotypical pimp because of his lack of understanding of the culture.

Tumburus’ art is nothing if not moody. The minimalistic lines, inking, and muted colors of Nomobots sets up a fitting neo-noir atmosphere. Which is odd considering this series leans more into cyberpunk territory. But really who needs neon signs and constant rain showers when contrast is king? Most of the main characters wear red clothes or accessories. Given the dark colors decorating the pages, it’s a great way to keep attention on the characters. The more red that appears, the more visible or important they feel.

The lettering meanwhile is extremely efficient in how it goes in one smooth line of reading order. Other times it works with the aforementioned red coloring to show two perspectives. One on the person in red and the other party speaking to them. Wordmarks meanwhile can get so powerful they actually become a panel at one point.

Nomobots Are Off To A Great Start

Nomobots #1-3 is only the beginning on what can be one of the most original takes on cyberpunk. By going back to its neo-noir roots with its moodiness and multiple points of view, people see a brand new world to invest in. Because everybody wants to feel something new from unlikely places. Why not see how the presence of one young woman makes this drug addicted world can be so impactful?

Nomobots #1-3 put the reader in the heads of the titular robots as they witness how one young woman's actions change the world around her.Review: NOMOBOTS — Taking The Sides of Humanity In Strides