A dystopian post-apocalyptic world created by humanity’s own hubris is far from an original concept, but writers Zac Thompson and Emily Horn along with artist Alberto Alburquerque are here to try their hand at the trope with “No One’s Rose” #1. While it does have some cool moments and solid artwork, it doesn’t do enough in terms of characterization to make it stand out from the crowd.

“Centuries after the fall of the Anthropocene, the last vestiges of human civilization are housed in a massive domed city powered by renewable energy, known as The Green Zone. Inside lives teenager Tenn Gavrilo, a brilliant bio-engineer who could rebuild the planet. But there’s one problem: her resentful brother Seren is eager to dismantle the precarious Utopia.” 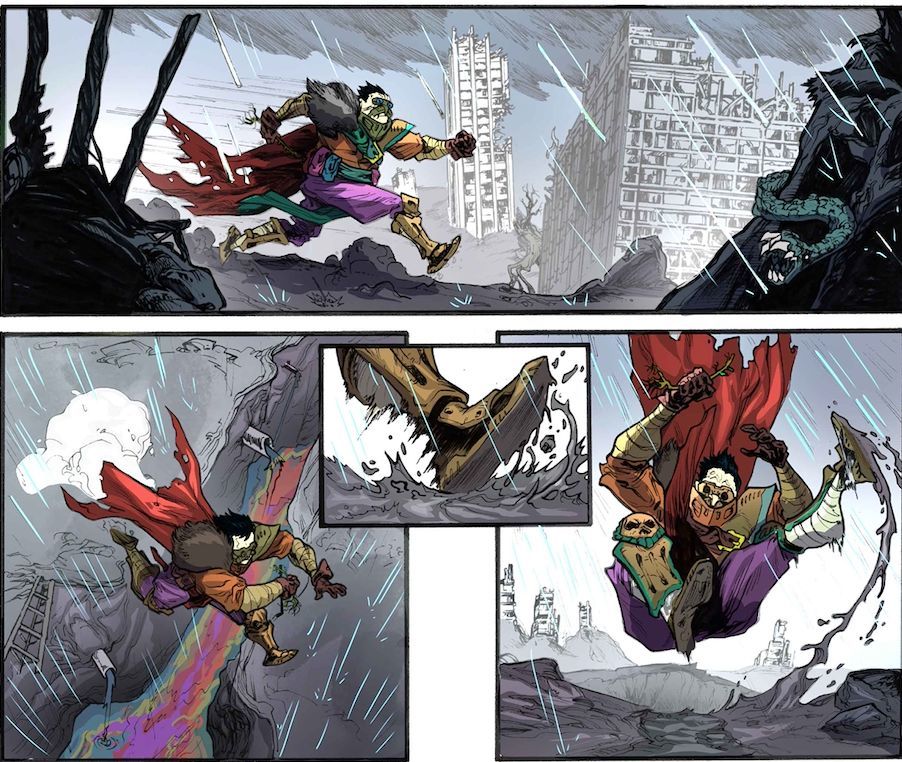 While “Solarpunk (sci-fi that utilizes environmental conservation in its plot) is a fairly new subgenre of science fiction, it shares much of its lineage with other post-societal sci-fi. The first issue of “No One’s Rose” is proof enough of that sentiment. Zac Thompson and Emily Horn have done a commendable job in crafting a world and backstory that feels both worryingly feasible and compelling. The brother and sister protagonists are each given relatable stories with personalities that should be easy enough for a reader to interface with. However, their characterization gets a bit lost in the blobs of exposition-filled dialogue. Instead of using overhead narration or specifically info-oriented dialogue, the Tenn and Seren each speak in bubbles that are half naturalistic speech, half exposition. For Tenn this fits to a degree, as she’s a scientist explaining to her peers what she’s working on. For Seren however, it makes him a bot of an unsympathetic character. There’s also a major attempt at creating a futuristic dictionary of slang on Tenn’s part, and it just comes off as trying a bit too hard. This sort of world-building through language rarely works, and the dialogue here is Exhibit A for why to avoid its temptation. These could easily just be “first issue woes,” as setting up a brand new world does require a bit of info dump. However, this first issue doesn’t do much to separate itself from the crowd of teenage-led dystopian post-societal stories as it sits right now. 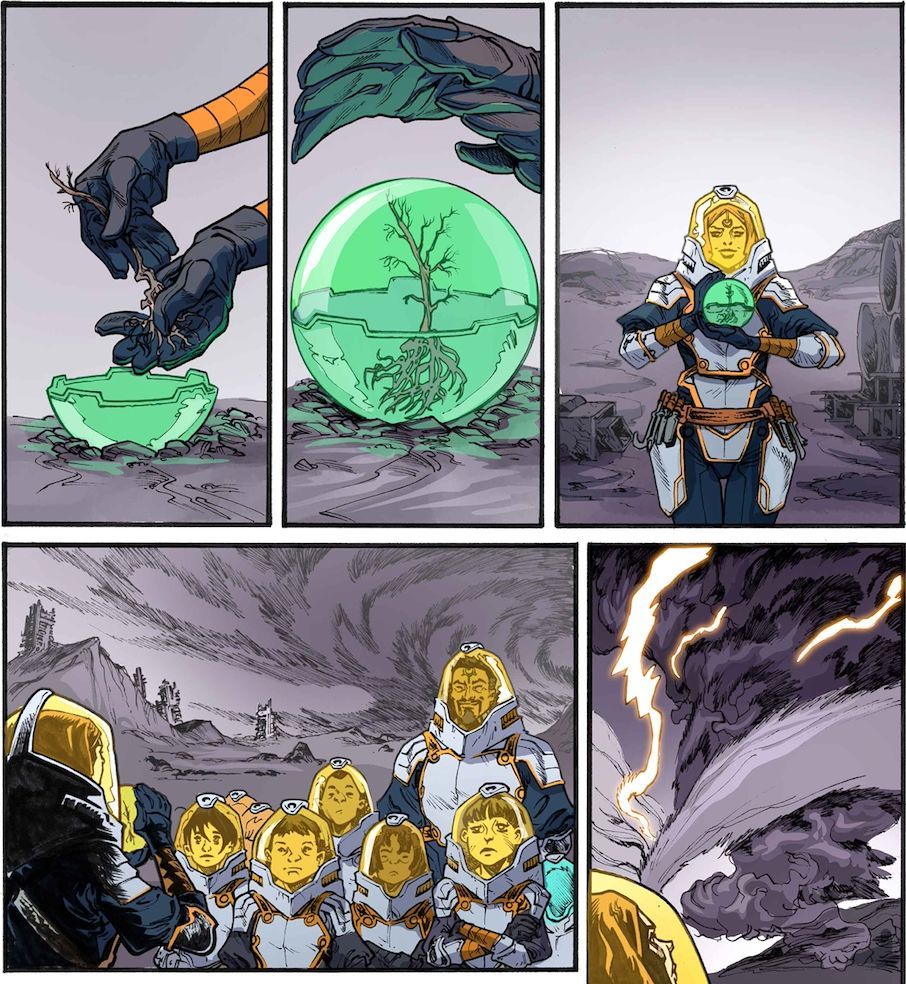 Any great sci-fi comic has to be brought to life by stellar visuals, so it’s fortunate that Alberto Albuquerque is on hand to deliver the goods. The visuals here are pretty fantastic, with an excellent blend of clean techno-futurism and chaotic desolation for the environments. There’s a neat mixture of earthly grit and sci-fi cleanliness that helps push the comic’s tone as well. Characters are drawn distinctively with very clear and natural mannerisms and expressions. The stellar linework is fleshed out by Raul Angulo’s range of colors, which are a mix of suitable flat tones and vivid neons. The effect given here is not unlike Sean Gordon Murphy’s work on Tokyo Ghost if one’s familiar. Otsmane-Elhaou’s letters differ in font and color when switching from narration to dialogue, and then shift greatly based on delivery. There’s a solid amount of variety in the visual department that really draws (no pun intended) the audience in where the writing falls short. 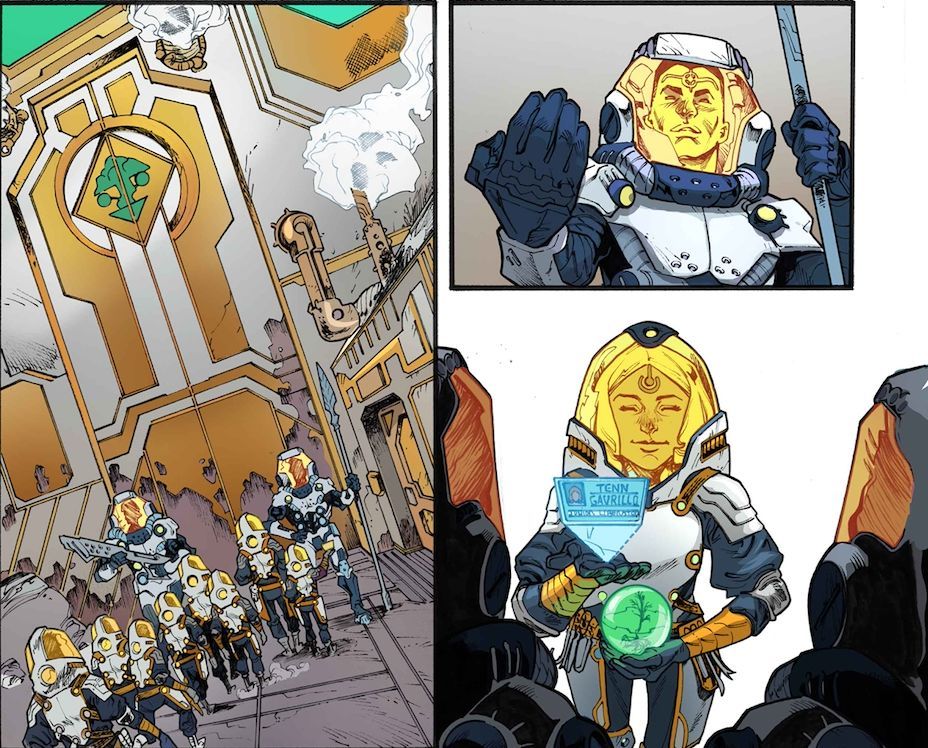 “No One’s Rose” #1 is a promising Solarpunk concept with great visual direction that falls a bit short in terms of character or personality. The dialogue is full of exposition and over-exerted slang that harms rather than helps a pair of protagonists with genuine potential. Hopefully, these minor missteps are just first issue struggles and the script can match the stellar artwork found in this debut’s panels. Should you choose to explore this new world, be sure to grab a copy when it hits shelves on 3/25!