I have a confession to make. I have not read Tom Taylor and John Timms’ Superman: Son of Kal-El. I’ve heard great things, seen awesome previews, interviews, and more. And now, with Nightwing #89, Superman: Son of Kal-El is higher on my reading list than ever. Writer Tom Taylor, artist Bruno Redondo, colorist Adriano Lucas, and letterer Wes Abbott bring these series together in spectacular fashion. It makes you wish “World’s Finest Sons” was a whole series, rather than just a short arc. 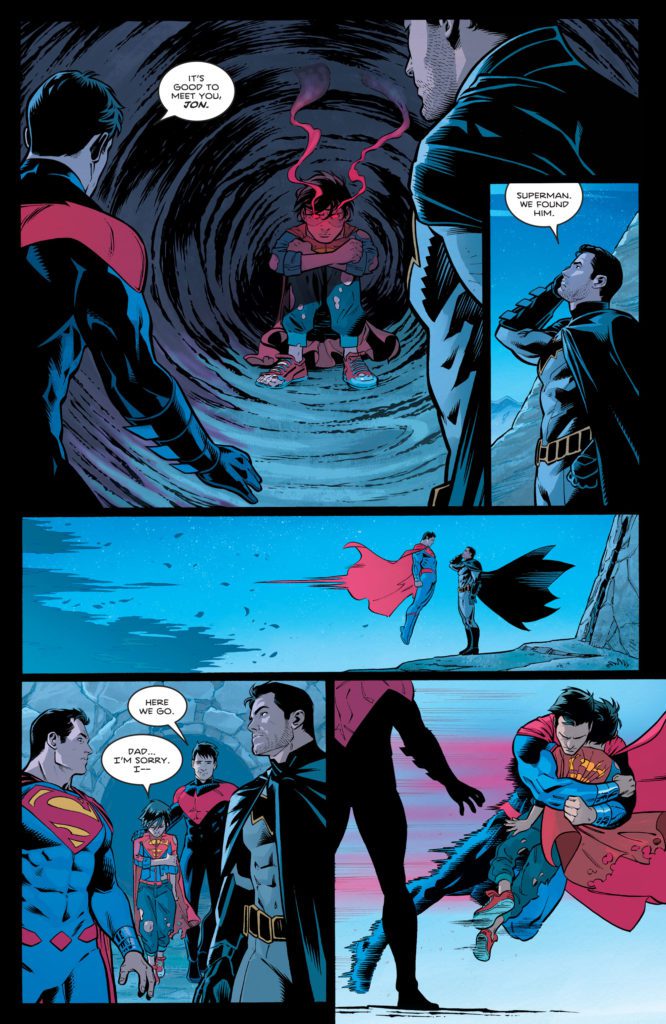 Taylor’s script is earnest and heartfelt. He brilliantly explores the power of fathers and friends in this issue. And though in many ways we’re taking a break from the events of Nightwing, we’re learning so much about the character. Dick Grayson is a big brother, through and through. Taylor gives him every opportunity to show how good he is at looking out for those in need. And Taylor sets the scene for this kind of issue perfectly, by starting the chapter off in a time gone by, when Dick showed kindness to a young Jon Kent. Beyond the sincere moments of connection between characters, the funny quips, and the witty banter, there’s a mystery at the heart of this story. Taylor gives us just enough to be itching for all the answers in that next issue.

Have I gushed enough about Redondo’s art at this point? Because I doubt I have. Redondo nails every beat of this issue. He can be wonderfully sincere in one moment and then laugh-out-loud goofy the next, but he sets each mood naturally. There are many panels that “bleed” into others in this issue. The hand of someone in one panel stretches across the gutters into the panel next door. This gives each page a feeling of wholeness. You’re not just seeing individual images, but one big picture that’s being painted by Redondo. The effect is both eye-catching and playful. 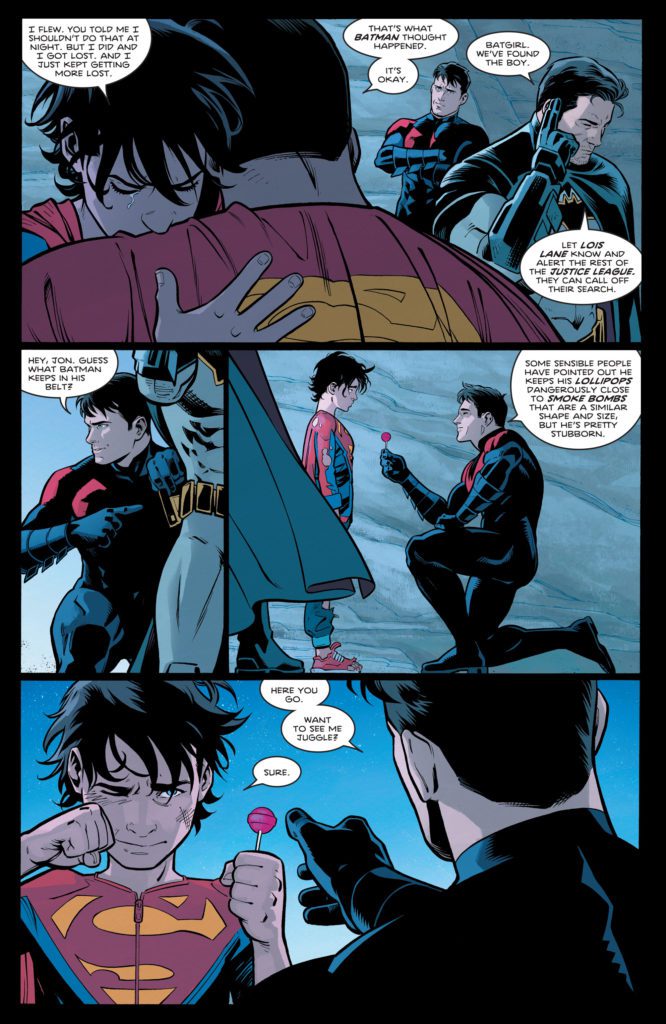 There’s a great shift in the coloring of this issue. Lucas’ Metropolis looks nothing like his Bludhaven. Metropolis is bright, colorful, and full of life. You could say that about Lucas’ Bludhaven too, but there’s a warmness to the color palette that makes the whole city feel a little less ominous. Lucas also repeats certain story beats in his coloring, playing on thematic repetitions. In one scene, we see Dick and Babs talking. They’re in Dick’s apartment, the lighting is a soft blue that makes the scene feel intimate. When Superman visits his boyfriend Jay, the color palette is almost identical. Lucas is drawing out similarities between the lives of Dick and Jon. It makes you all the more excited for their team-up.

In one of the opening scene of this issue, Superman talks to a hologram of his father in the Fortress of Solitude. As they talk, Abbott letters the dialogue so the word balloons almost seem to hug one another. You can hear how much Jon wishes his father was there, but you can also see how lifelike the responses seem to be. But as the scene ends, their dialogue no longer shows up in the same panel. It feels like they’re giving each other a wide berth. And when Jon ends the conversation, saying something to himself, the word balloon is right in the center of a giant panel. You can see the loneliness he’s feeling in the fathoms of space around his dialogue.

DC Comics’ Nightwing #89 is a ton of fun and it will make you want to immediately catch up with Taylor’s other series, Superman: Son of Kal-El. This partnership feels like it could go on for thirty issues. Hopefully someday we get to see something like that. But for now, you can get your fix by picking up Nightwing #89 from a comic shop near you!

DC Comics' NIGHTWING #89 is a ton of fun and it will make you want to immediately catch up with Taylor's other series, SUPERMAN: SON OF KAL-EL. This partnership feels like it could go on for thirty issues.Review: NIGHTWING #89 Introduces a Perfect Team-Up