Review: MISTER MIRACLE: THE SOURCE OF FREEDOM #1 Tries To Escape From Its Own Mess

Writer Brandon Easton and artist Fico Ossio, along with colorist Rico Renzi and letterer Rob Leigh, bring us the return of Shiloh Norman in “Mister Miracle: The Source of Freedom” #1. Unfortunately, this return spawning out of DC’s Future State event is hampered by a script that tries to do too many things at once, coming off as overstuffed and hard to focus on. This is lifted up by some great work by the art team, making this issue a good looking but muddled debut.

“The Mister Miracle show used to be the hottest ticket in town, whether you caught him onstage escaping from perilous traps or spotted him on the streets of Metropolis taking out bad guys. What Shilo Norman forgot is the first rule of both showbiz and super-heroing: always leave them wanting more. Now it’s time to start showing the world what a miracle man can do. Showbiz/superhero rule #2: timing is everything. There’s a new performer in town who wants to knock Mister Miracle off his pedestal and stake a claim to his famous moniker! Can Shilo break free of this trap? (Why yes, that is a clue.)” 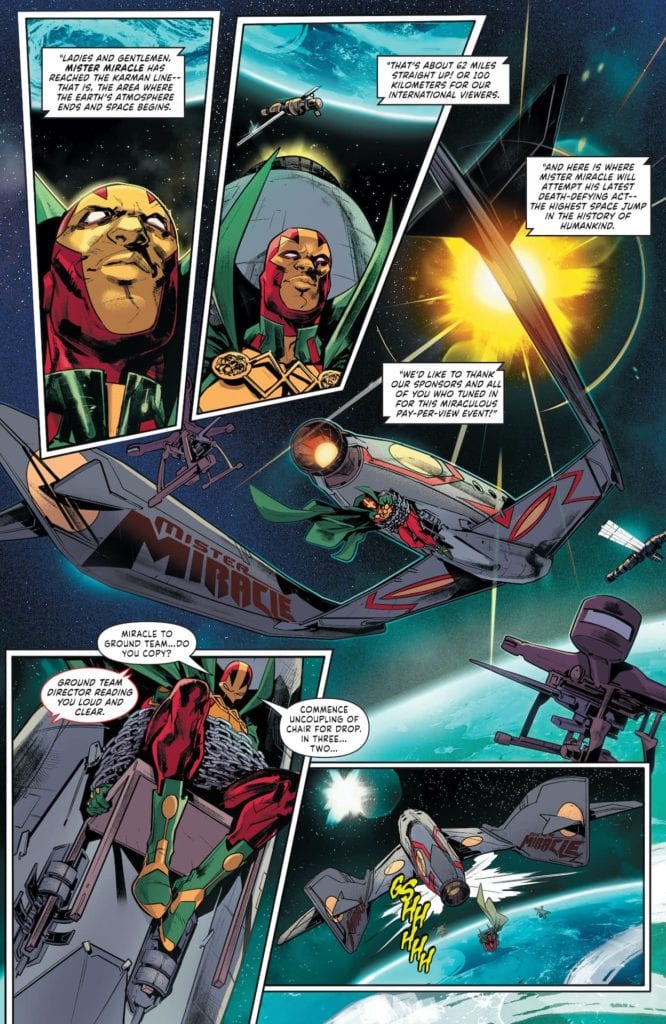 I’ll be completely honest and admit that I’m a bit biased against any Mister Miracle title that doesn’t star Scott Free as the man escaping from certain doom. It’s nothing against Shiloh Norman as a character, (I quite enjoyed his “Seven Soldiers” series under Grant Morrison), it’s just that I’m so attached to Free as this character. Now, with Free’s popularity at an all-time high after the success of Tom King and Mitch Gerard’s masterpiece, having a Mister Miracle title that stars a character many people may not recognize is a daunting task. This is why it’s so unfortunate that “The Source of Freedom” #1 stumbles in its attempt to bring Shiloh Norman back to the forefront following DC’s Future State event. This comic’s script has too many plots all happening at once, and none of them are really given enough time to breath. It feels like every other page there’s some major development involving something new popping up in Norman’s life, when we haven’t even figured out what the importance of the last conflict was. This issue is overstuffed with a romantic subplot, socio-political messaging, a cosmic threat, and Norman coming to terms with his identity as Mister Miracle and the problems he inherits with that identity. None of these plot elements really get much time to themselves. This being said, the most engaging part of this issue is Shiloh’s struggle with his secret identity as a black man and whether or not it’s his “responsibility” (as some would put it) to go public. The pages that focus on this struggle are the best part of this comic’s script, and I would have liked to see more of the issue tackle this struggle. Instead, we get a comic that struggles to find a focus and makes for a tangled reading experience. 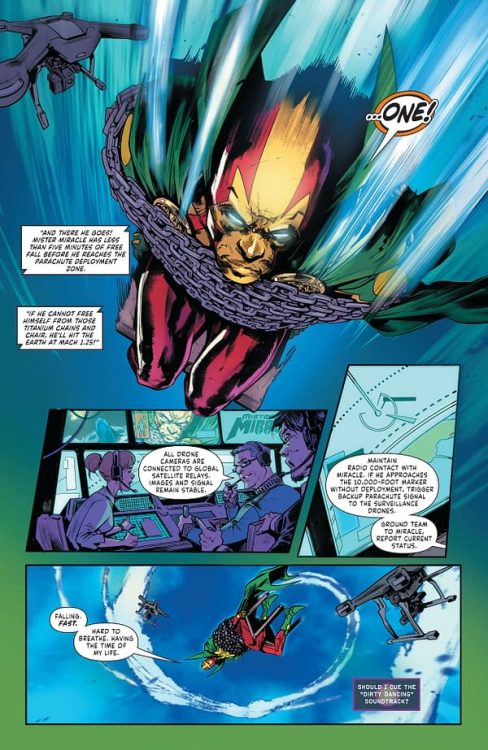 The saving grace in “Mister Miracle: The Source of Freedom” #1 comes in the form of Fico Ossio’s pencils and Rico Renzi’s colors. Ossio’s shadowy and stylized aesthetic is full of detail and kinetic energy. The way Ossio draws his characters in both their expressions and movements does a great job of placing us in the room (or falling from space in a ridiculous escape stunt) with the cast, and the emotions look and feel real throughout the book. The action and how it runs through the panels is full of forward motion and looks absolutely stunning. There is occasionally the sense that there is too much happening a once on a page, or that actions seem to be running together. I mainly attribute this to the script rather than the artist, however. Rico Renzi’s colors are saturated and complex, with tons of tonal variation and shadow. The Mister Miracle costume pops with a definition that makes it stand out the way such a look should stand out against the backdrop of a normal urban environment. Rob Leigh’s letters vary slightly with font changes and a clean look, but don’t do too much outside the basics. This is a sharp looking comic that manages to elevate a convoluted script into an enjoyable read. 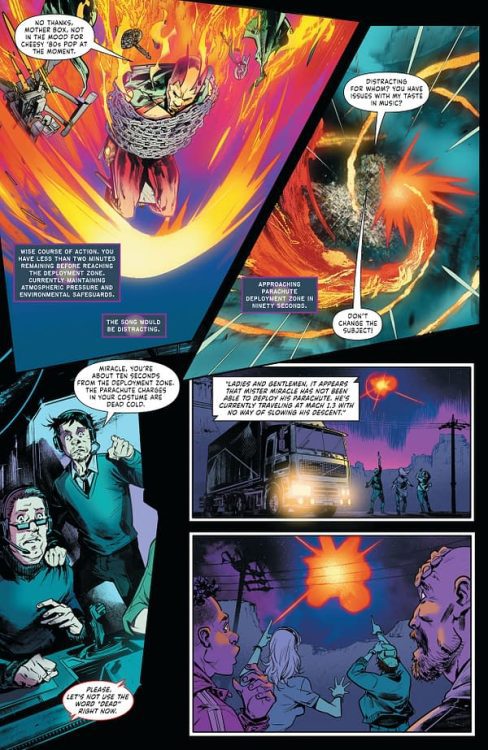 “Mister Miracle: The Source of Freedom” #1 is a sharply drawn but hastily written debut comic for this reintroduction of Shiloh Norman as the Apokalips-born Houdini. Brandon Easton’s script manages a couple moments of engaging writing and solid dialogue, but it mostly fumbles as it tries handling too many problems at once and never allows the plot to breathe. The visuals from Fico Ossio and Rico Renzi are vivid and stylistically awesome, making for a killer looking comic with its own unique aesthetic. If you’re a fan of the underdog Mister Miracle identity and want to give this a shot, pick it up when it hits shelves on 5/25!

A gorgeous debut issue marred by an unfocused script that tries to tackle too many things at once.Review: MISTER MIRACLE: THE SOURCE OF FREEDOM #1 Tries To Escape From Its Own Mess