Miskatonic High is a new, independently published, teen horror comic series by Mike Shea and Ryan Mendoza. For the uninitiated, the title is inspired by a fictional university (named after a fictional river) that frequently appears in the pieces of literature that make up H.P. Lovecraft’s Cthulhu Mythos.

In the first issue, Shea and Mendoza introduce readers to a small group of mismatched teens who attend the prestigious private school Miskatonic High. Members of the school’s community service club, the group takes a field trip to help clean an elderly woman’s basement. Shortly thereafter, they find themselves transported to ancient Egypt, where an evil sorcerer is attempting to unleash tentacled demons upon the world.

In this second issue of Miskatonic High, the group once again find themselves confronting a supernatural horror. Furthermore, a deep connection is made between one of the students and the terrors lurking beneath the surface. 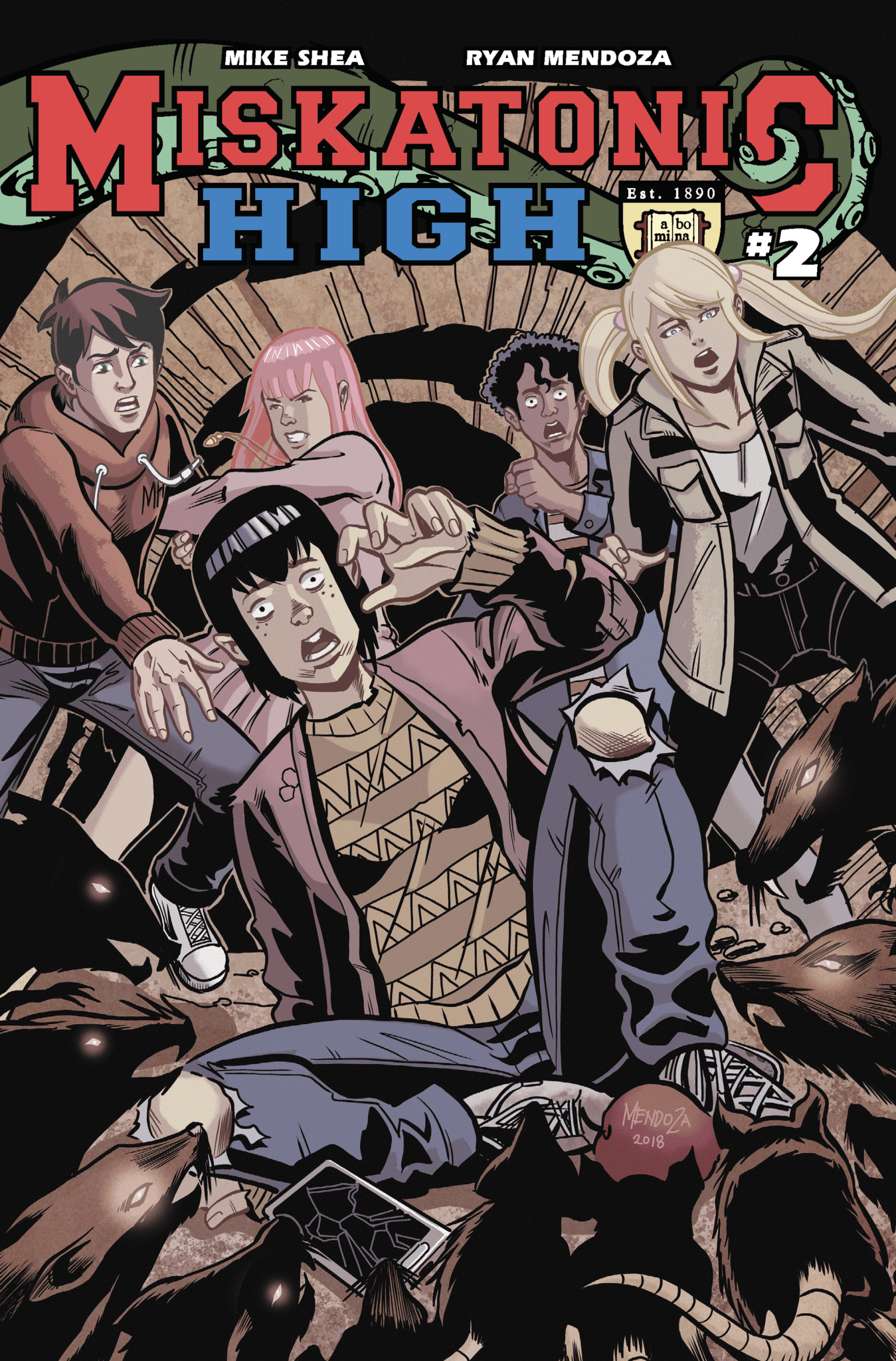 For Sarah Clarke, life at the affluent Miskatonic High had never been easy, being a poor, rural outcast. But when her friends come to help her on the family apple orchard, secrets better left unknown will be unearthed and she and her classmates will experience a terror in the dark.

It is apparent that writer Mike Shea was inspired by the hijinks of another group of supernatural mystery solvers when crafting Miskatonic High. The two published issues are episodic, with the stories more-or-less wrapped up by the final page. What Shea has done well thus far is slowly build upon the connection the group has with these Lovecraftian horrors coming to life, and the protectoral part that they will inevitably have to play. The most intriguing character is without a doubt Sarah, who is the social outcast among these misfits, and has a surprising link to the mole monsters the group encounters in the second issue.

Though the story draws inspiration from Lovecraft’s literary universe, that world’s air of dread and despair cannot be found in Miskatonic High. Instead, Shea opts for a fun and lighthearted tale. The characters are very upbeat, and deal with each situation with snark and a tongue-in-cheek attitude. Readers won’t be bogged down with too much exposition. Rather, you’ll be experiencing the scares and revelations alongside the “Mystery Incorporated” gang for the first time. 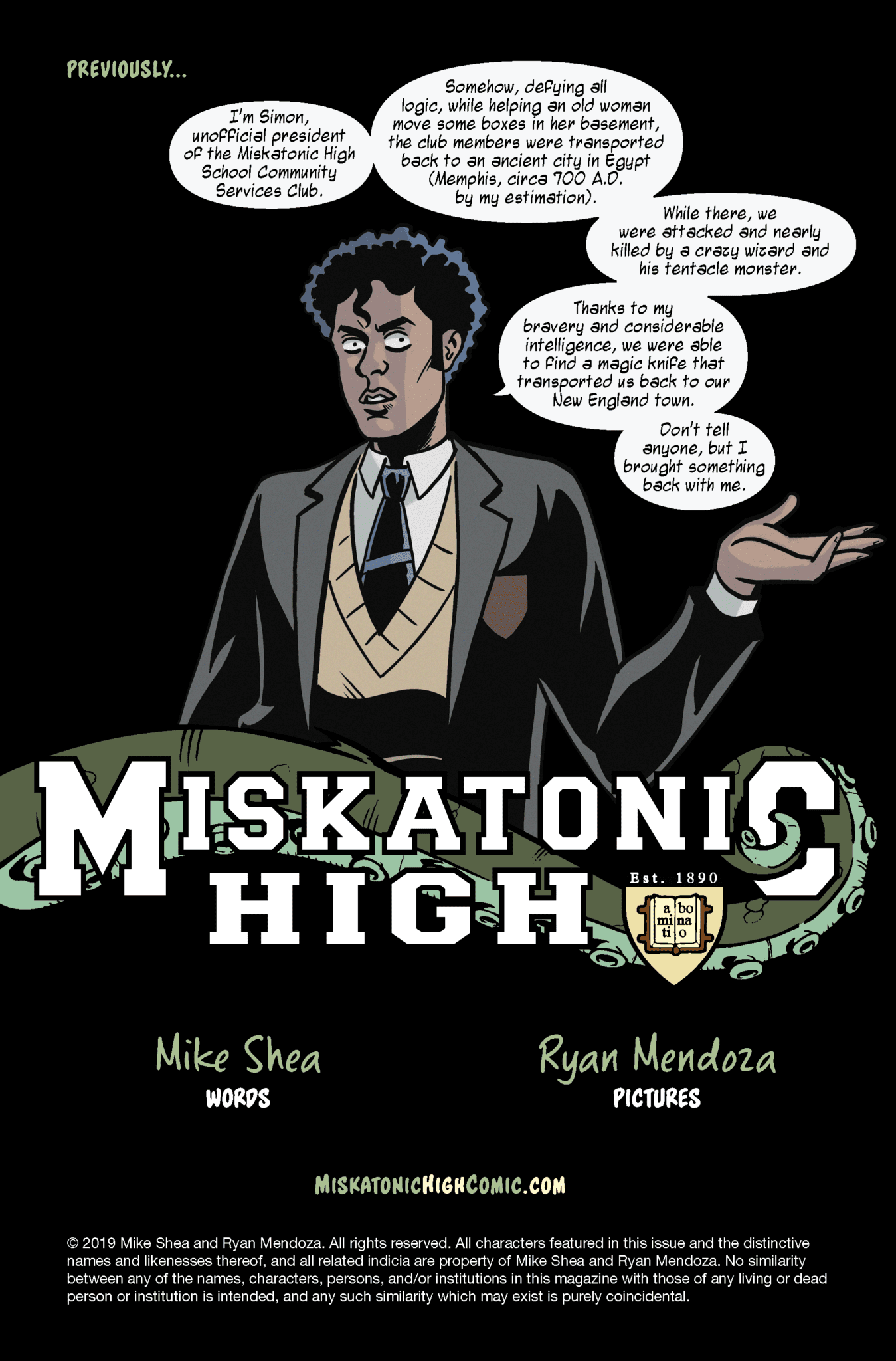 Ryan Mendoza does a great job in balancing the light and darker aspects of Miskatonic High. His colors are slightly toned down, and he uses a muted golden overlay to light each panel with an otherworldly glow, as if something off-kilter is looming. He also makes great use of shadows to amplify the tension and potential terrors hiding around a corner.

Mendoza’s character designs are animated and expressive. He cuts into the tension created by the coloring with a style reminiscent of the wholesome, vintage Hanna-Barbera animation found in Scooby Doo and Super Friends.

Miskatonic High is a satisfying balance fun and frights, with snarky, nonplussed characters and exceptionally designed monsters. It’s for anyone who is a fan of Scooby Doo, and even modern incarnations of Archie and The Chilling Adventures of Sabrina. Come for the Lovecraftian horrors, stay for the fun characters and the dangerous mysteries to be solved.

The first issue of Miskatonic High is currently for sale on their official website. You can also support their already successful Kickstarter to get your hands on copies of the first two issues, as well as some other goodies.

Miskatonic High is a satisfying balance fun and frights, with snarky, nonplussed characters and exceptionally designed monsters. Come for the Lovecraftian horrors, stay the fun characters and the dangerous mysteries to be solved.Review: MISKATONIC HIGH #2 is Scooby Doo Versus Lovecraftian Horrors