MILES MORALES: SPIDER-MAN #22, available in comic book stores on Wednesday, January 6th, details our hero’s response to the recent death of one of his beloved family members. In the concluding issue of the Ultimatum arc, Miles’s uncle Aaron Davis sacrificed himself to defeat the evil villain terrorizing the city. And his absence now leaves a vacuum in the Morales family. Yet hope seems to be brewing. The people in Miles’s life are finding new ways to express who they are in an ever-changing world.

The idea of one’s name and its relation to their identity is explored throughout this issue. Readers first encounter it via a discussion with Miles and his father. The former “Jefferson Davis” reveals that he changed his surname to “Morales.” 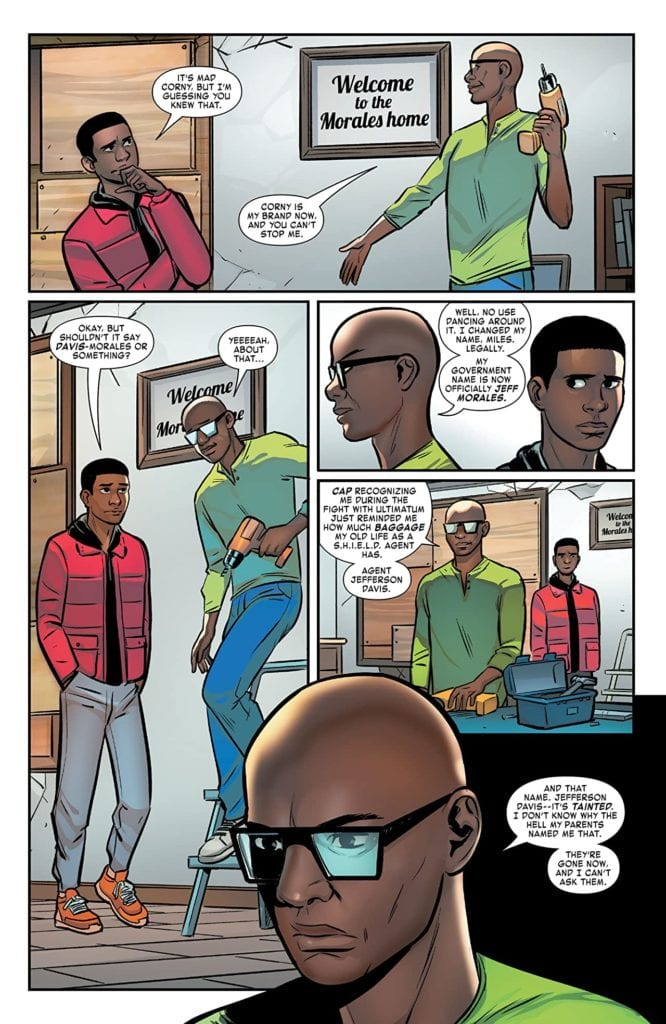 Despite the obvious negative history associated with the name, Jefferson explains how this change represents an opportunity for a fresh start—a development in the former S.H.I.E.L.D. agent’s identity. He describes choosing this path to better represent who he is as a person.

We see this same dynamic played out throughout the rest of the narrative—whether it’s Starling’s explanation of her superhero moniker or the villainous Frost Pharaoh’s new title. Writer Saladin Ahmed demonstrates a remarkable ability to portray deeply human concepts and emptions in his characters.

Natacha Bustos’s penciling and ink work, David Curiel’s coloring, and VC’S Cory Petit’s lettering worked well together in this issue. Miles and Tiana’s forms seem to glide effortlessly across each panel, drawing readers into their movements. Their costumes’ shades of black and red pop against the grays and browns of the cityscape. In addition, the word balloons are placed strategically—at times subtlety out of the action and at others a part of the city itself.

MILES MORALES: SPIDER-MAN #22 is the breath of fresh air needed after the heavy toll taken on our hero during the Ultimatum arc. Perhaps Miles will look deeper into his own identity and what his name represents in the coming issues.

Do you think Tiana will share more of her secrets with Miles? Let us know in the comments below!