Review: Meditations and Melodrama in THE SWAMP THING #11

The Swamp Thing #11 isn’t the first time this series has managed to have its cake and eat it too. This entire run reads like Jack Kirby writing slam poetry. It’s beautiful, soul-bearing, dramatic, and then suddenly pulpy and action-packed. The Swamp Thing returns for its second season with issue #11, and writer Ram V, artist Mike Perkins, colorist Mike Spicer, and letterer Aditya Bidikar get right back to the weird world of lyrical comic book mayhem.

V’s script is chock full of symbolism and melodrama. These are characters that are at the beginnings of big things. Their world is changing, because they are changing it. As such, the characters often give each scene a dramatic flare. There are pep talks, monologues, and flourishes galore. All they need is a pipe organ and a velvet cape to complete the look. While this would feel over the top in another writer’s hands, V absolutely nails the campy joy of old monster movies, while also balancing these moments with subtle, more meditative scenes. Our heroes are grounded by their tortured search for the right path, as our villains revel in the glory of their misdeeds. V fully embraces the quirks of the monster/horror genre. Sometimes, you can almost hear him giggling as excitedly as his baddies. 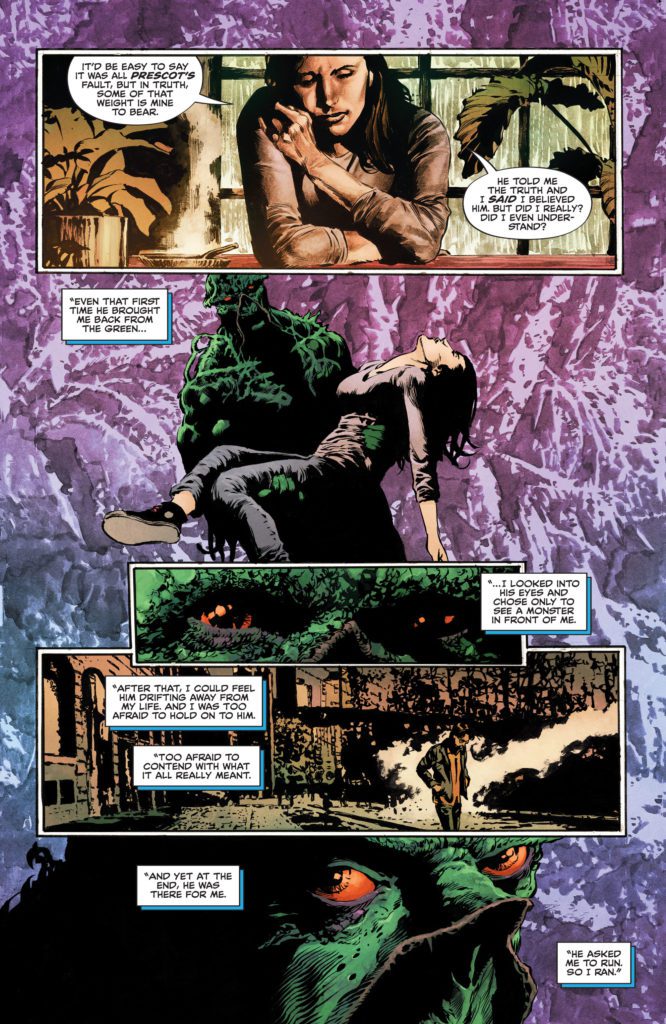 Often, I’ll discuss the coloring and artwork of a piece in two separate sections. For The Swamp Thing #11, that’s practically impossible. Perkins and Spicer work so beautifully in tandem with one another, it’s often unclear where one’s work ends and the other’s begins. Some scenes have a warm, penciled look to them. The characters look like they’ve been lovingly rendered on an artist’s sketchpad. You can see the texture of the pencils in both Perkins’ linework and Spicer’s fleshy tones. The inviting nature of these scenes is juxtaposed against a backdrop of haunting blues and purples, full of twisted shapes right out of a Cronenberg flick. Each page is such a mix of feelings, it perfectly sums up Jennifer Reece’s own complicated feelings about the hero-monster at the heart of this story.

Even Tefé Holland is a paradox of a character. Perkins gives her a look that makes her seem stern and unsympathetic. But it’s Spicer’s colors – the pleasant greens, pinks, and skin coloring – that show the empathy and courage that lives inside her calloused exterior. And as we shift over to our antagonists, this art style is abandoned. Suddenly, the scenes feel cold and stark. Perkins’ work is still stunning, but it has a mechanical accuracy and precision to it. Spicer’s colors cease to blend in textured tones, and look to have harder edges to them. With these subtle differentiations, Perkins and Spicer make us immediately feel different about this new setting. We just know as we join our villains that something has changed, and some of the understated beauty of this world has gone away. 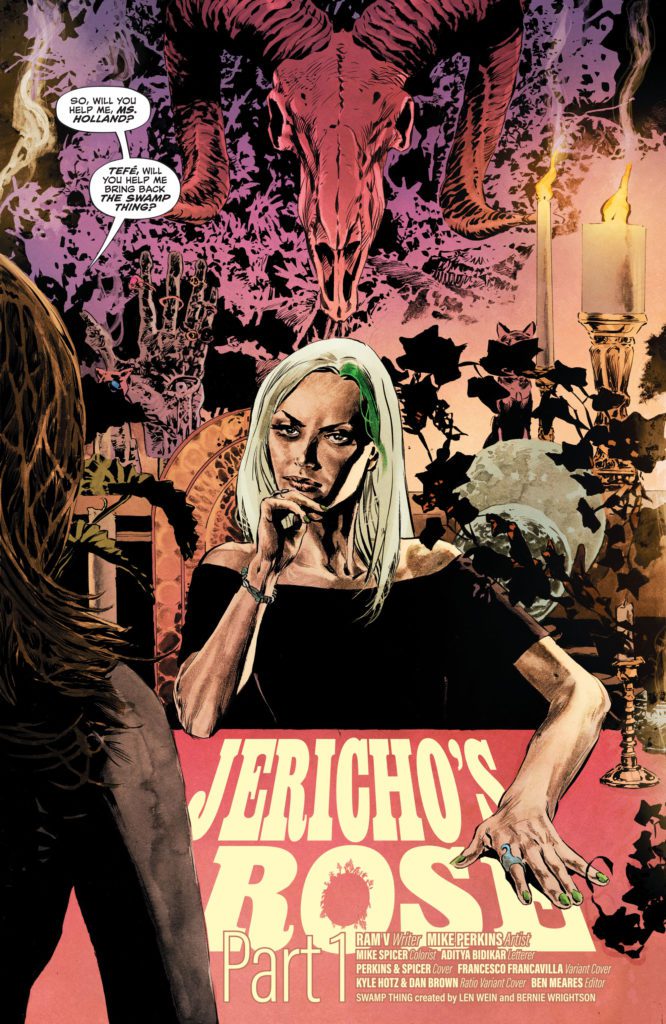 As always, there are plenty of beautiful variations to Bidikar’s lettering. We have the light green word balloons, with straight edges, of Jason Woodrue’s speech. This reminds us that even if he looks human, he’s really a twisted devil in a skin suit. His own voice betrays him. But even in each character’s dialogue, Bidikar adds subtle differentiations to the lettering to show their mood. Whether it’s the wavy edges of a word balloon – matched with the lower case font inside it – that represents a stifled sob, or the jagged sides and scratchy letters of the lines of a character that’s gone feral, Bidikar knows how to make you hear each moment.

DC Comics’ The Swamp Thing #11 is an incredible jump back into the saddle. This creative team continues to balance its poeticism with pulp and its subtle beauties with theatrical villainy. This series continues to mesmerize at each turn. Pick up your copy of The Swamp Thing #11, out from DC Comics March 29th, at a comic shop near you!