Roman Black, the patriarch of an old magical family, faces a crisis. He must select an heir to his line before he “ascends.” However, he’s unready to make a decision, seeing all of his children as either unready or unworthy. Things change, though, when a new young mage enters the picture through happenstance.

Cullen Bunn and Brian Hurtt are no strangers to balancing spooky and fun elements in stories. The pair collaborated on the critically-acclaimed supernatural western The Sixth Gun. Now, they team-up again to introduce what promises to be another spellbinding work of magic and mystery with Manor Black #1.

This issue provides a nice opening for the narrative. It introduces our cast of characters, the central conflict, and sets the plot in motion. It’s surprisingly concise in that regard; almost a textbook example of what a first act should accomplish. Despite that, it still manages to be engaging and tell a compelling story from page one. This is a difficult balance to strike as a writer, yet the team pulls it off well.

The reader definitely picks up on the tension in Roman’s situation. It’s never explicitly stated, but one clearly reads the distrust bubbling within the family.

One nitpick would be that we don’t know as much about Ari, the mage Roman rescues. While the book opens with her story, we quickly divert away to follow a pair of local cops for much of the middle section of Manor Black #1. How much bearing their subplot will have on the broader narrative is unclear. Regardless, it might have been nice to get more about Ari here.

Beyond that minor sticking point, the writing is excellent overall. It leaves the reader asking several questions, while setting an eerie tone for the broader narrative. While the book may just be setting the stage, it does so in a surprisingly incisive, yet tactful manner. 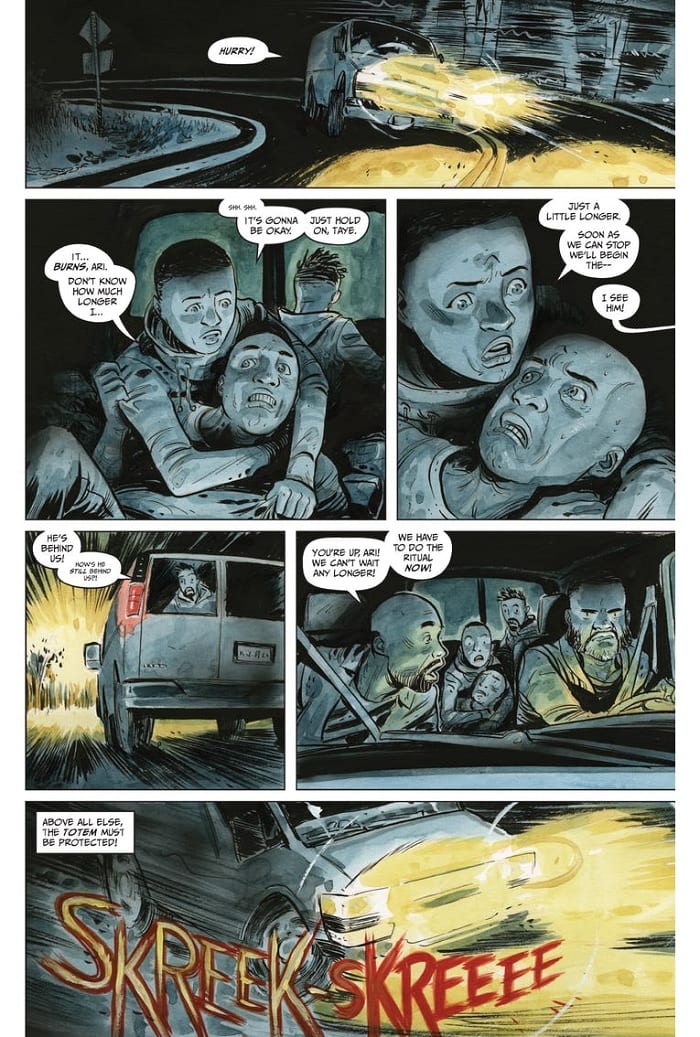 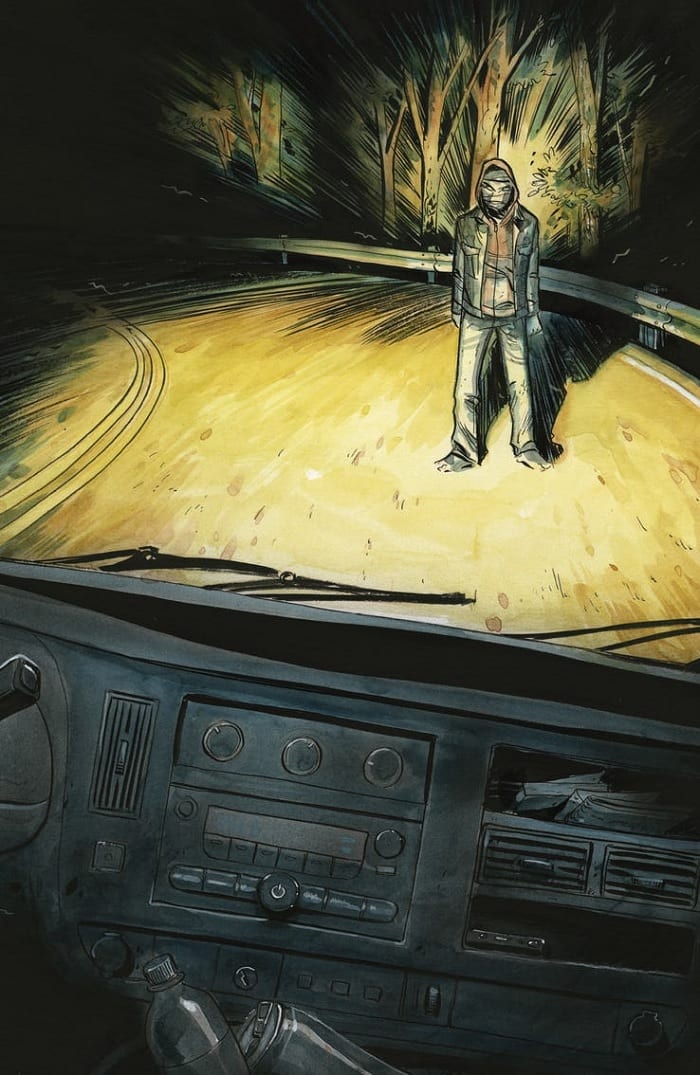 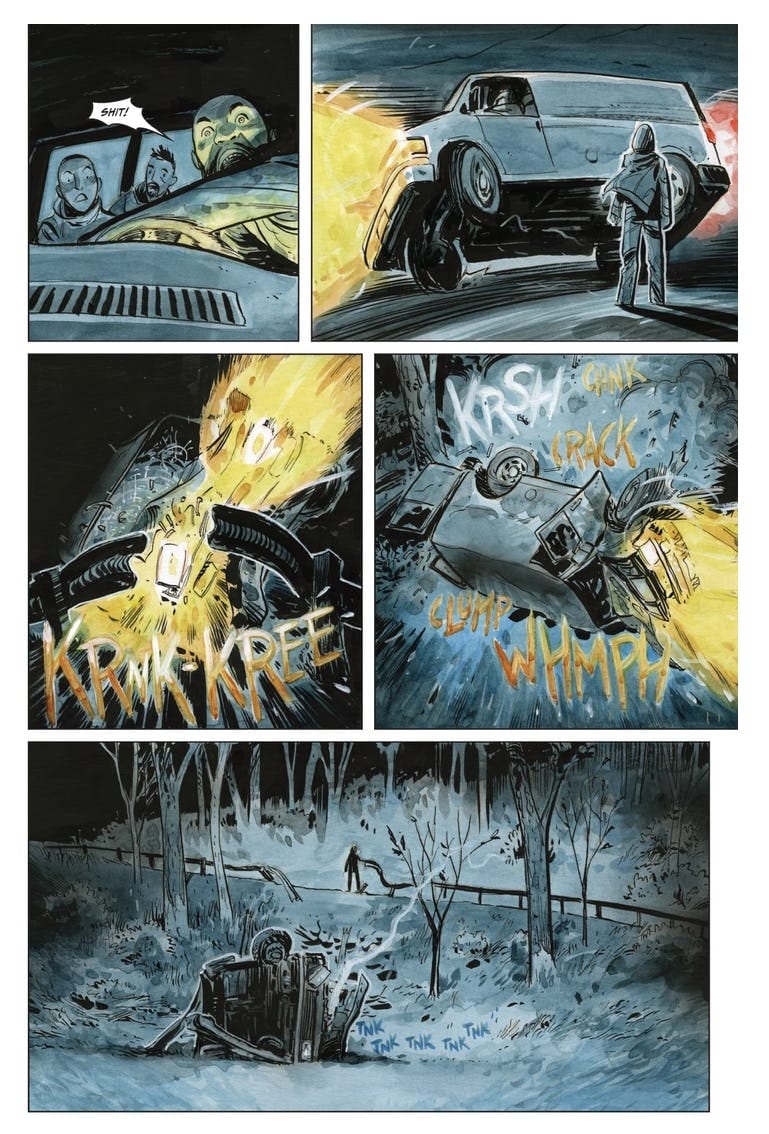 Given the strength of the storytelling, it could be easy to simply provide adequate visuals and let the writers carry the book. Fortunately, artist Tyler Crook is not willing to take the backseat in Manor Black #1. After collaborating with Bunn on Harrow County (also from Dark Horse), the pair are back together here, and promising great things to come.

Crook strikes a fine balance between detailed and a minimalist approaches. He employs each in careful measure, hewing toward a minimal look when the focus is on the action or character interaction, but more fully illustrating other panels to establish setting, tone, and mood.

That’s to say nothing of the illustrations themselves. Crook’s style is soft and watercolor-esque. It’s charming, though despite the softer look, it’s still remarkably effective at conveying apprehension or malice. It’s a difficult balance to achieve, but the artist demonstrates a sense of mastery over his style, commanding it as needed. Crook presents some striking imagery in Manor Black #1. Roman Black’s conference with his ancestors stands out as a particularly interesting sequence in this regard. The way the artist illustrates their grotesque visages, and the ghostly entities that rise from them, is particularly strong.

Crook also provides colors for the book. The washy textures possess that unique watercolor look, but are still crisp, precise, and absolutely gorgeous. It’s difficult to judge the colors and line work in isolation, as the two are so closely connected. Still, really great stuff either way.

Manor Black #1 is a home run. Bunn and Hurtt’s storytelling is sharp, and brought to vivid life by Crook’s sublime artwork. Definitely worth checking out, so grab a copy this Wednesday at your local comic book shop.