Lois Lane has always been the DC Comics character who’s fallen in the shadow of her famous superhero husband. True, she’s been the focal point of countless Superman stories, but there’s never been a comic line focused exclusively on the hard-hitting investigative journalist. Fortunately, the creative minds of Greg Rucka and Mike Perkins are bringing readers a tale of truth, suspense, and cultural commentary as Lois uncovers a dangerous secret that could impact the whole world.

After spending a week with her head down deep in work, Daily Planet editor Perry White informs her a colleague was found dead in Russia after criticizing the Kremlin. Stricken with anger and unbelief, Lois requests one of her journalist colleagues to “question” those responsible while she attempts to dig deeper into this scandal. 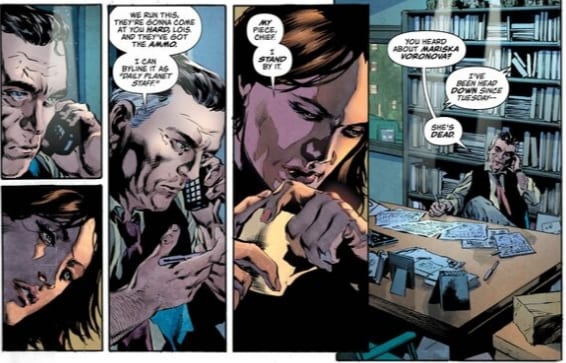 Reading this issue makes one feel like they’ve been thrust into the middle of a Watergate level investigation. In order to showcase Lois’s journalistic abilities,  Rucka has her use her connections to investigate the incident. Among these includes The Question, who wastes no time extracting information from a lead. But this investigation isn’t the only thing on her mind. Back at home, Lois continues to face criticism from the public after sharing a kiss with Clark as Superman.

The story’s parallels to the United States’ current dealings with Russia and the Southern border are hard to miss. In fact, we get to see Lois criticize the administration for taking money from large corporations in exchange for children detention center contracts. It’s this ability to speak to real issues in a fictional world that makes LOIS LANE #1 one of the greats.

Perkins’ pencil and ink work, working in conjunction with Paul Mounts’ coloring, sets the tone for the issue. The bold lines and various dark shades makes one feel as if they’re joining journalists Bob Woodward and Carl Bernstein as they venture into dangerous territory in pursuit of a story.

Simon Bowland’s letters add to the suspense of the issue as well, placing the word balloons in such a strategic way as to complement Lois’ probing questions, building even more suspense.

Perkins’ cover, with its dark shades and fiery Superman sigil, captures the drama behind Lois’ dangerous world of investigative reporting. Jenny Frison’s variant cover places much more of an emphasis on Lois’ status as a journalist, placing her in a suave fedora complete with leather jacket and interview pen.

LOIS LANE #1 is a breakout hit that promises to establish Lois’ status as one of the greatest DC Comics characters. The intelligence, strength,  and pursuit of truth makes her just as much of a hero as Superman.

What did you think of Lois Lane’s first comic line? Let us know in the comments below!