When I first signed up to review Locke & Key …In Pale Battalions Go… I wasn’t expecting much. Maybe another fluffy addition to the world of Locke & Key at large, but nothing to write home about. I couldn’t have been more wrong. Writer Joe Hill, artist Gabriel Rodriguez, colorist Jay Fotos, and letterer Shawn Lee provide one of the strongest yet simplest chapters in the world of Locke & Key. And Pale Battalions Go #3 is a magnificent finale to a soul-searching miniseries.

“Brutal” doesn’t seem to quite cut it for Hill’s writing in this chapter. No one gets out of this fight unscathed, including the reader. Hill makes us fall in love with these characters, shows us their humanity in beautiful ways, and crushes them in front of us. But this is a series about war, and any other ending would feel wrong somehow. Hill sets up all kinds of characters on the moral spectrum. From the outright honorable to pure evil, and every shade in between. This is Hill’s way of saying that war doesn’t help anyone. It doesn’t matter what side you’re on or how good you think you are; war takes no prisoners. But this chapter wouldn’t have half the punch it does without Hill’s sprinkling in of sweet moments. Moments that never overstep their mark, never feel unearned, but instead, illustrate our stakes. These little moments remind us that humanity and decency are what’s on the line.

Rodriguez is the beating heart of this comic. His mastery of human expression is what drives the stake right into our hearts. The fear on a young German soldier’s face is not that different from the terror on the face of a little girl. Even the ones who smile at the thought of violence have little moments of humanity. Their walls come down in their final moments, and the screaming child underneath is visible for a split second. But there are also plenty of characters in this issue that just set their jaw. As the danger gets nearer, some eyes widen, others narrow. Rodriguez tells us so much about characters we barely know. Characters that run through the mayhem with a determined look on their face when it makes more sense for them to be hiding and crying. Rodriguez gets these characters. Better yet, he gets humanity, and he beautifully illustrates the spectrum of responses to conflict on these characters’ faces.

One of the easiest things to spot in this issue is how drastically Fotos has changed his colors from previous issues. The palette is much richer, much darker. These are not the war-torn plains; this is a warm home. But the thing is, the red blood still seems to pop as much as in any other issue. And the color palette doesn’t change. It doesn’t respond to the tragedy and destruction, at first. Any other colorist would make the page look bleaker as the world seemed bleaker. But Fotos doesn’t do this, and it makes it feel as though the world doesn’t care about our or the characters’ pain or loss. Each page’s indifference to events makes every heartbreak cut deeper. And in the final pages, Fotos flips the equation. We see a character seemingly moving on from all the destruction they’ve witnessed. They look sort of alright, all things considered. But their surroundings are bleak, and the color palette is pale. It’s Fotos’ foreshadowing, getting us subliminally prepared for the final nail in the coffin. 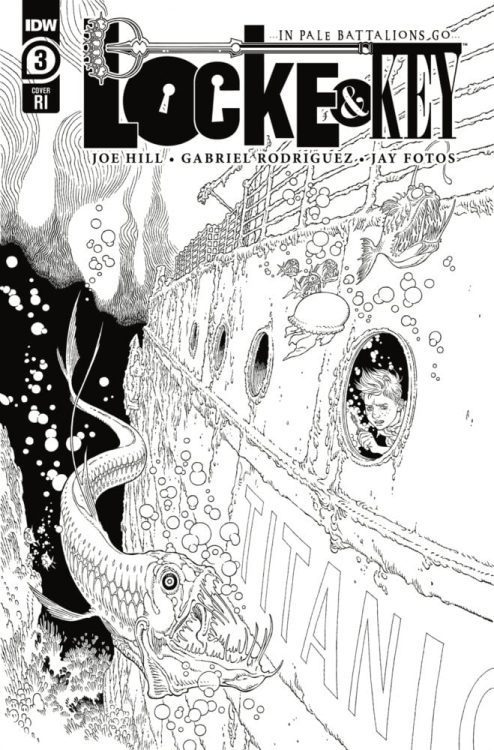 Lee’s lettering for this issue is quite careful and subdued. He writes subtitles to the German dialogue at the bottom of each panel. It’s interesting to see what lines don’t get translated. At times, the German leader is misquoting Alice in Wonderland or ruminating over “locks and keys.” Most of the sound effects are small and simple. Often, they’re the sound of keys turning in locks. But occasionally, Lee lets loose. The large orange “NEIIIIIN!” of a soldier shouting from another room is immediately noticed when set up against simple dialogue. And as the issue ends, Hill writes in the poem this miniseries was named after. Before we see the poem, we get three pages completely devoid of lettering, and then the poem is all written out in the space of two pages. Lee could have slowed the delivery of the poem, writing captions on the three empty pages. It would make a lot of sense to do that. But thankfully, he didn’t, and the sheer silence of those pages shines. Lee knows we need those moments to be completely uninterrupted.

The finale to this LOCKE & KEY miniseries is a satisfying, heart wrenching closer. This IDW creative team pulls out all the stops.Review: LOCKE & KEY: IN PALE BATTALIONS GO #3 is a Perfect Ending