From the legendary Mike Mignola and writer Christopher Golden, as well as artists Bridgit Connell and colorist Michelle Madsen, comes a monster-filled occult adventure and sequel series in the form of “Lady Baltimore ” #1. This follow up to the original Baltimore offers the exact sort of demonic and monstrosity-laden hijinks we’d expect from a Mignola offering, and the team here manages an exciting (if not a bit overwhelming) blend of action set pieces and outstanding visual work.

“Once she was Sofia Valk, living in a village overrun by evil. In time she became Lord Baltimore’s most trusted ally. Now, more than a decade after his death, Europe has erupted with the early battles of World War 2 and dark forces are rising again. With witches, vampires, and Nazis on the march, Sofia must embrace the title of Lady Baltimore!  But can she fight monsters without becoming a monster herself?” 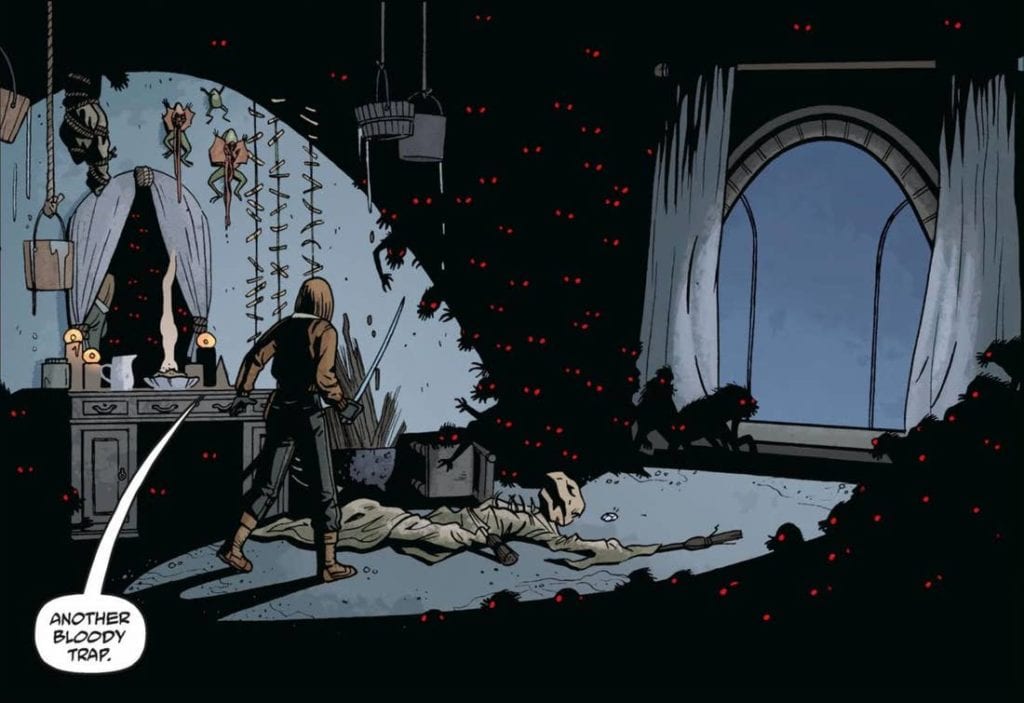 Much like its predecessor, “Lady Baltimore” #1 feels very much like a Mignola comic while also managing to still feel fresh. Lady Baltimore, Baltimore, and Joe Golem all three make a new connected “Mignola-verse” that is not connected to the Hellboy Universe (I hear that question a lot, so I feel I have to clear it up). The script from Christopher Golden is yet another occult adventure with plenty of occult-babble and magic, but still diffused with the  character-centric moments we expect from these books. The pacing of this issue is super-tight, with every page feeling like it matters. The dialogue is varied from character to character, with each cast member having their own personality. Sofia Valk herself is an entertaining protagonist, while the rest of the cast likely just needs a bit more time to settle in to the story. One issue I had with this comic is that is sort of has the feeling where you feel like you’re walking into a conversation when it’s already halfway over. Yes, I know that this is a sequel-series, but one of the strongest elements of shared-universe comics such as this is that a new number 1 issue should function as a solid starting point for new readers. It isn’t unnavigable or anything, and Golden does provide some level of context and background for these characters’ relationships, but it still feels like you’re coming in late to the party. If you haven’t read the original Baltimore though, I’d highly recommend it because it’s really quite good. In any case, this pre-WWII era occult adventure is still a really fun start to this sequel-series, and it’s held aloft by its sense of adventure and well-written chemistry among the cast. 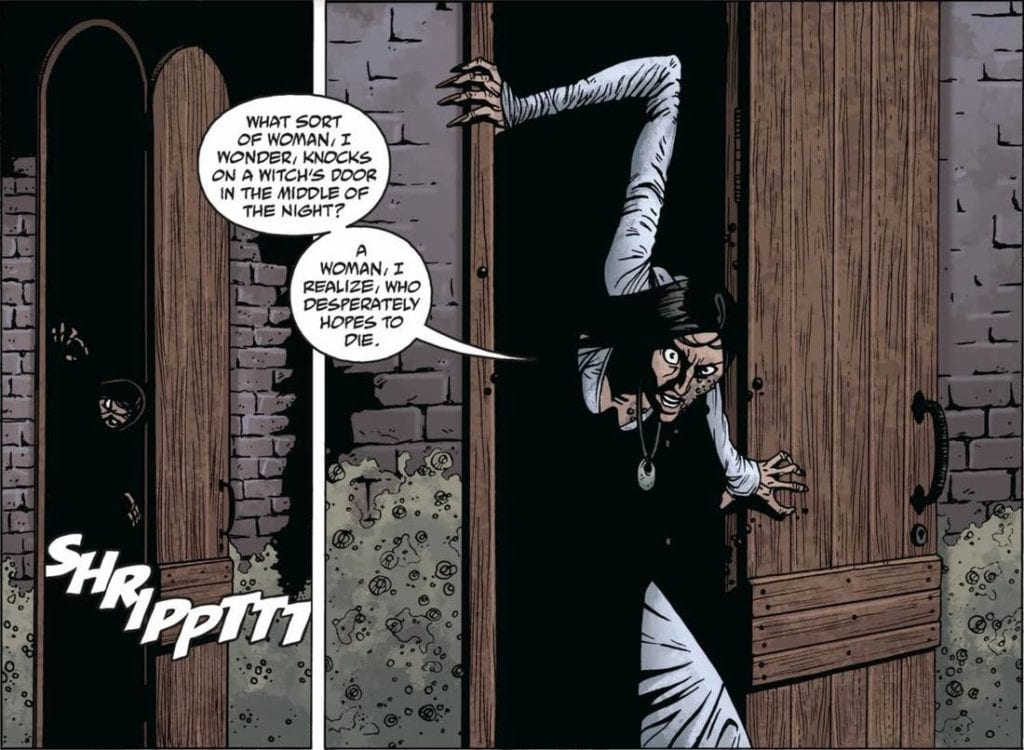 Like with any Mignola comic, “Lady Baltimore” #1 has the perfectly put-together dark and historical mixed with bloody and spooky aesthetic that is perfect for the story. We have the talents of penciller Bridgit Connell and colorist Michelle Madsen for this. There’s a phenomenal amount of detail from Connell’s pencils, both in the character animations and set pieces. The architecture of late 1930’s Europe comes alive with cobblestone and worn brick architecture. The facial animations and designs for each cast member are unique and present the characters’ personalities in a way that makes them easily relatable to the audience. The monster designs and occult symbols are all perfect Mignola-style offerings, with tendril-filled grotesques and floating eyeballs crawling and exploding with gunfire in slimy brilliantly gross fashion. The panel direction flows with a careful eye for both action sequences and character focus. Every page feels like its part of a larger set piece with narrative function, and all of the visual elements flow together in top form. Madsen’s colors are all covered in darkness, bathed in fire and moonlight and it all look outstanding. The atmosphere she gives this book is spot-on and fits perfectly into the world of Baltimore and the Mignola portfolio as a whole. 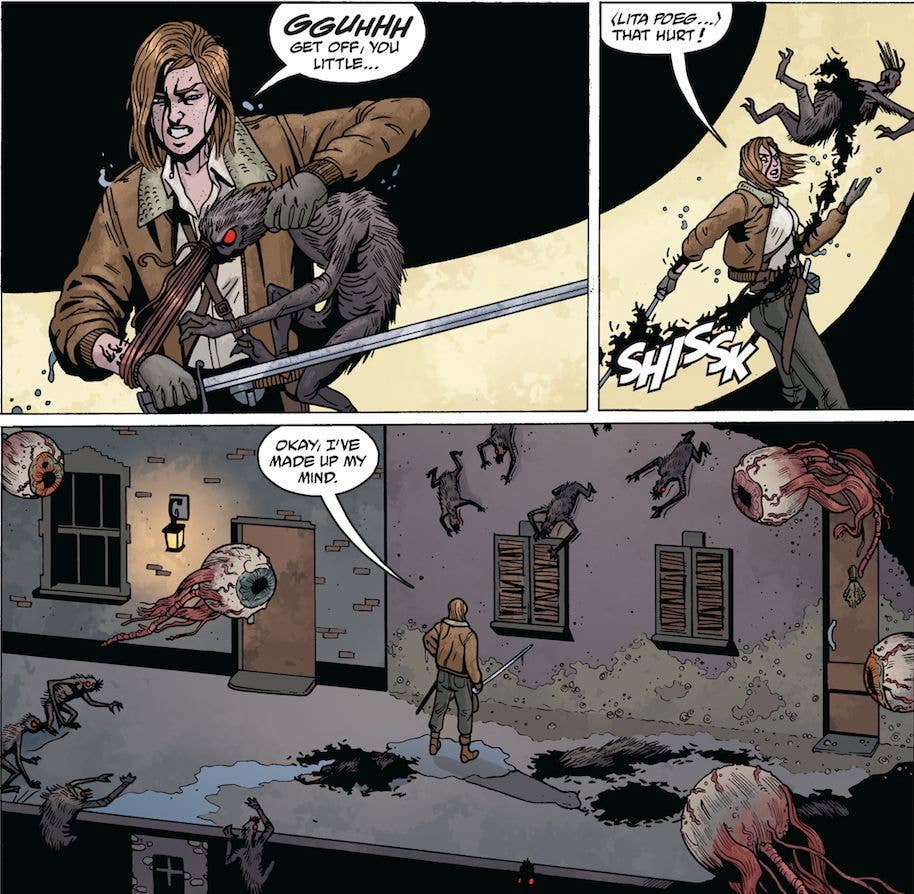 “Lady Baltimore” #1 is a tightly paced and monster-filled jumpstart to this new adventure in the world of Baltimore. While the script can feel a bit overbearing in terms of its information, its still a carefully written blend of revealing character moments and occult action. The visuals from Bridgit Connell and Michelle Madsen are dark and detailed, blending perfectly into the larger world of this series and as pieces of the Mignola library as a whole. Be sure to grab this first issue when it hits stands on 3-24!

A fast-paced and adventurous follow-up to Mignola and Christopher Golden's Baltimore, held back a bit by an almost overwhelming amoount of information but held together by great action and excellent visual work.Review: LADY BALTIMORE #1 Is An Adventurous Witch Hunt