JUSTICE LEAGUE ODYSSEY #19, available in stores on Wednesday, March 4th, dives deeper into the mind of Epoch, the mysterious “Lord of Time.” Apparently, he’s a person of interest to Darkseid and his forces, meaning the League members could find some pertinent information. But in a race against the clock, what could the master of time unveil to combat the coming threat? 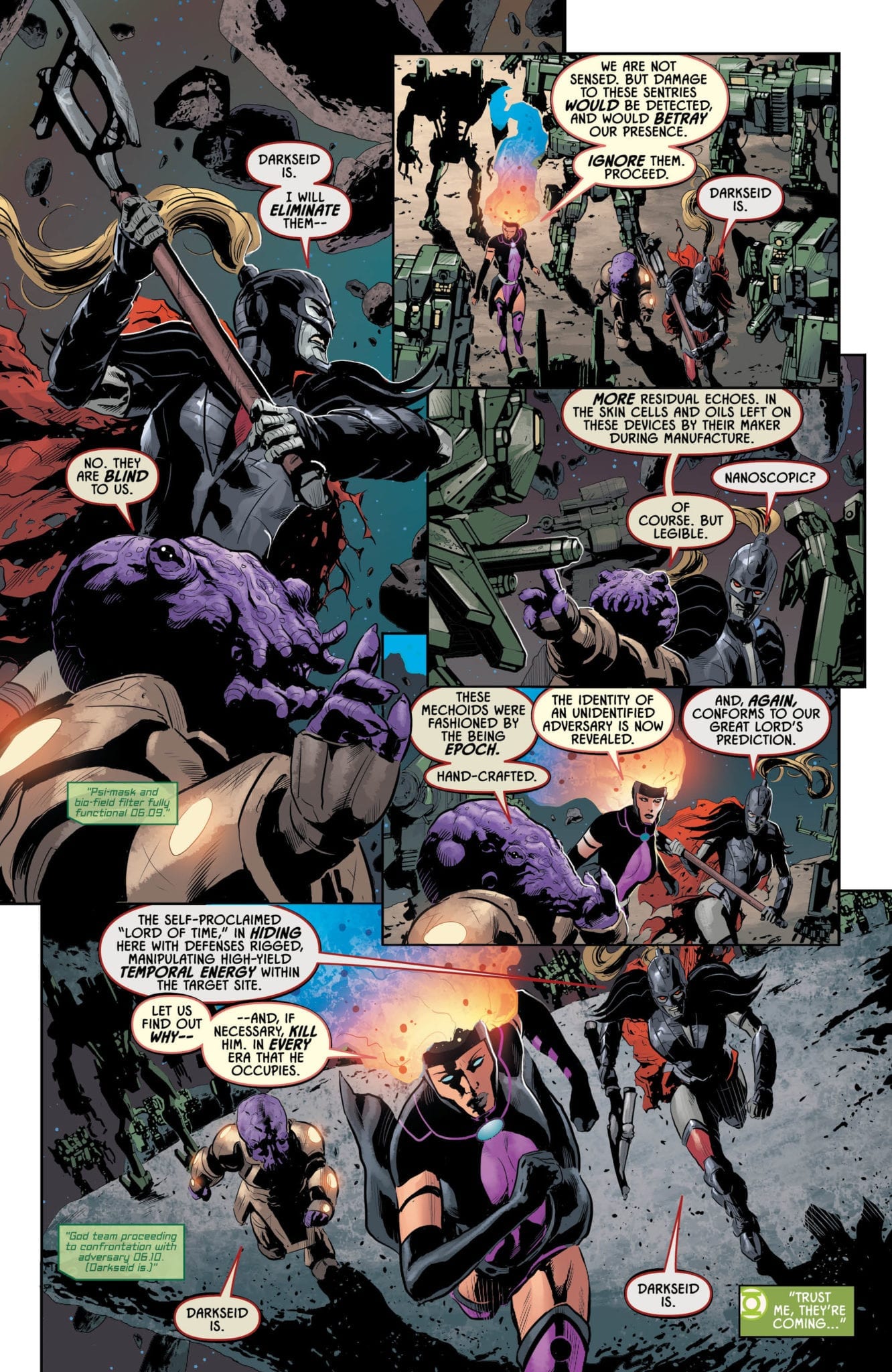 The League members, along with Gamma Knife and Orion, met Epoch last issue after exploring Darkseid’s vessel. They learned that he was human who could manipulate time as he willed it. But with so much data and contraptions procured by the man, we still don’t know what his intentions are. One might reasonably wonder if he’s planning to take on the villain’s approaching kill team all by himself. 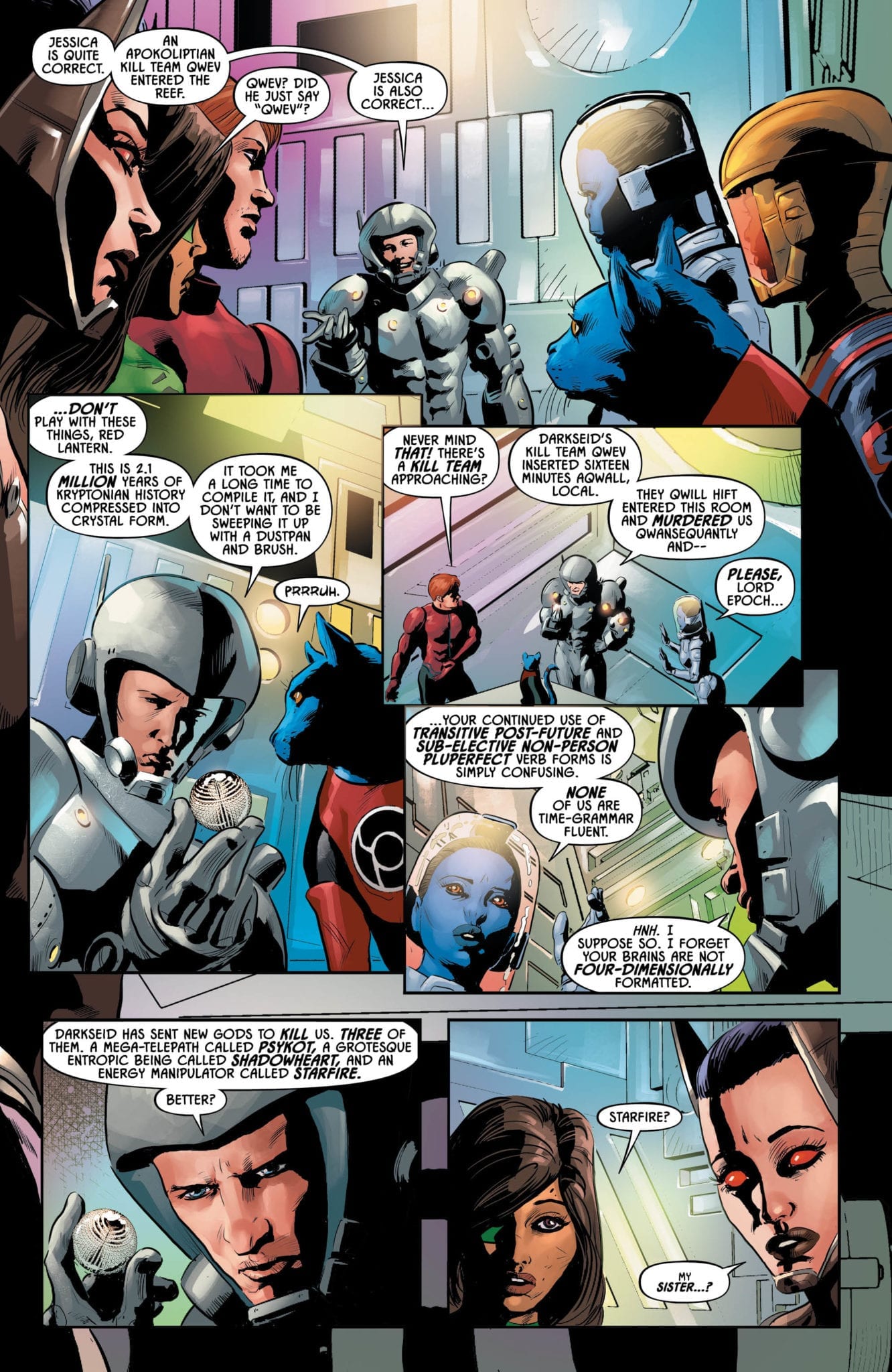 Earlier on in this storyline, Cruz saw her close friend and fellow Justice League member Cyborg fall prey to Darkseid’s control. But now it appears the evil overlord has overtaken Starfire, the sister of Blackfire and beloved Titans member.

The team must now decide how to alleviate the threat: should they attempt to subdue their mind-controlled friend without killing her, or would it be best to wipe her out completely? Ironically, Blackfire, in a true example of compartmentalization, calls for the latter. Her reasoning? Epoch can rewrite time/history and erase Darkseid and his evil influence plaguing the universe, saving her sister. And indeed, this method is the one Epoch proposes.

Dan Abnett’s writing asked a a hard-hitting philosophical question at the core of any person who’s serious thought about the evil in this world: What would the world look like if we could edit out all the bad parts of life? Unfortunately, our heroes may soon learn the ramifications of such a circumstance.

Cliff Richards’s penciling and ink work, Rain Beredo’s coloring, and Andworld Design’s lettering come together beautifully in this issue. The sleek designs of Darkseid’s heralds have multiple variations of black armored suits that fit each character’s color palette. In addition, the letter boxes pace well with the action, increasing and decreasing in spacing depending on how quickly the scene is moving.

José Ladrönn’s main cover gives readers a look at the Darkseid-controlled Starfire, showing us how far one of DC’s beloved heroes has fallen.

Skan’s variant cover features Darkheid and his newly recruited minions, including Cyborg and Starfire. This shows readers just how complex the army our heroes are facing has become.

JUSTICE LEAGUE ODYSSEY #19 ramps up the stakes ten-fold by revealing Epoch’s plan. Only time will tell (no pun intended) if he will be able to pull it off, and what it will mean  for history itself.

Do you think Epoch’s plan will come to fruition? Let us know in the comments below!