Review: It’s All About Darkseid In JUSTICE LEAGUE ODYSSEY #18

The threat of intergalactic war builds in JUSTICE LEAGUE ODYSSEY #18. Available in stores on Wednesday, February 5th, the issue brings all of our dispersed heroes together for the fight of their lives against the forces of Darkseid. With Orion and a new hero named Gamma backing her up, Jessica Cruz faces off against Xotar, one of the newly christened New Gods. But despite this being’s incredible power, the foe she dreads the most isn’t a foe at all—it’s a lost friend.

Cruz and the other League members on this mission have found themselves in dire straights. They’ve managed to convince the Eskaton creature to follow them to Darkseid, but even that might not be enough, especially when fighting a version of Cyborg completely controlled by the villain. 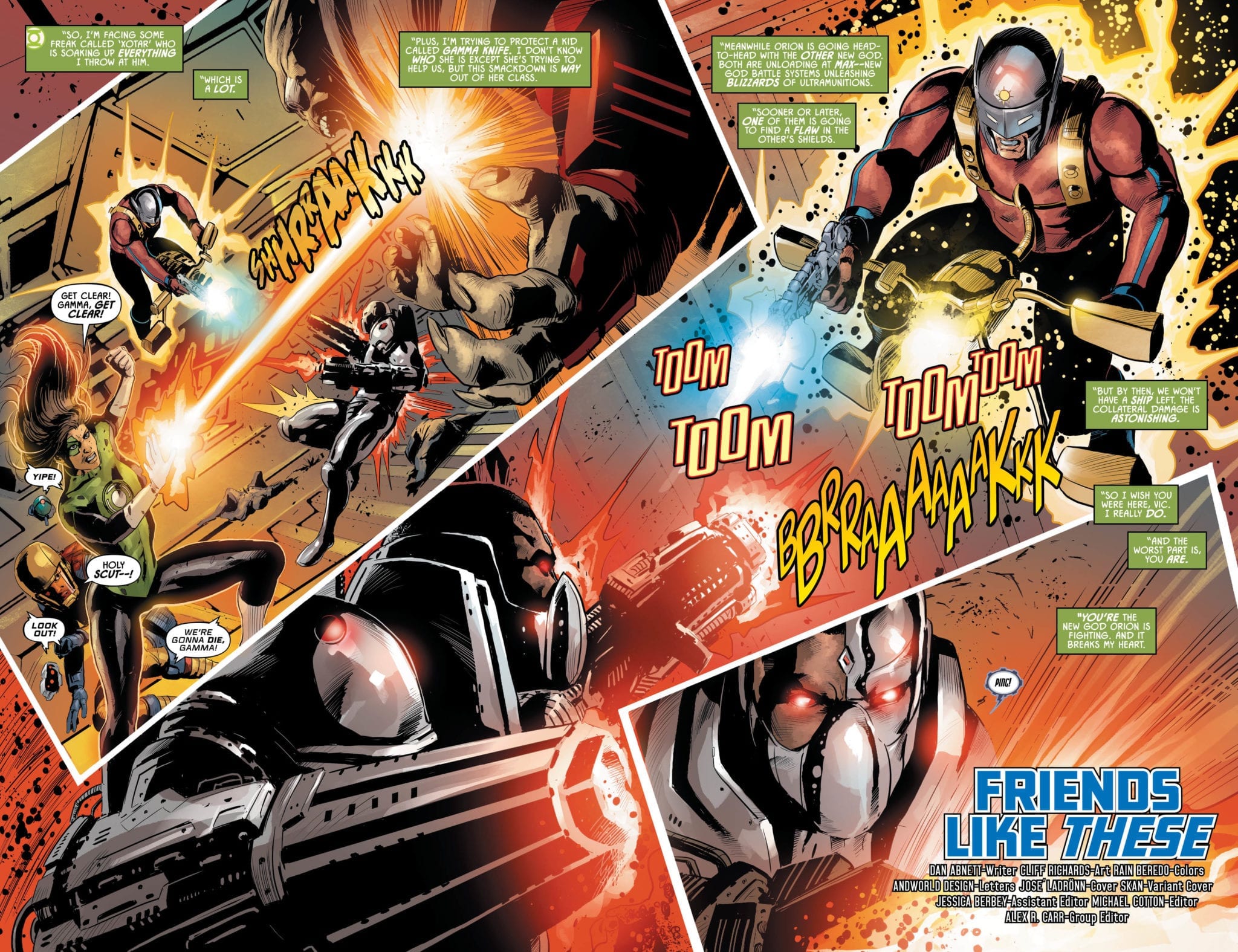 Dan Abnett’s writing captures the fully embodied emotions of Cruz. We feel her despair and sorrow—and yet, a glimmer of hope shines through as she calls out to what’s left of Cyborg. Whether her call is all in vain remains to be seen, but it’s inspiring seeing a realistic character face darkness while keeping the faith.

However, the Eskaton awakes at an inopportune moment and disrupts the battle. And it’s ready to “greet” the New Gods. 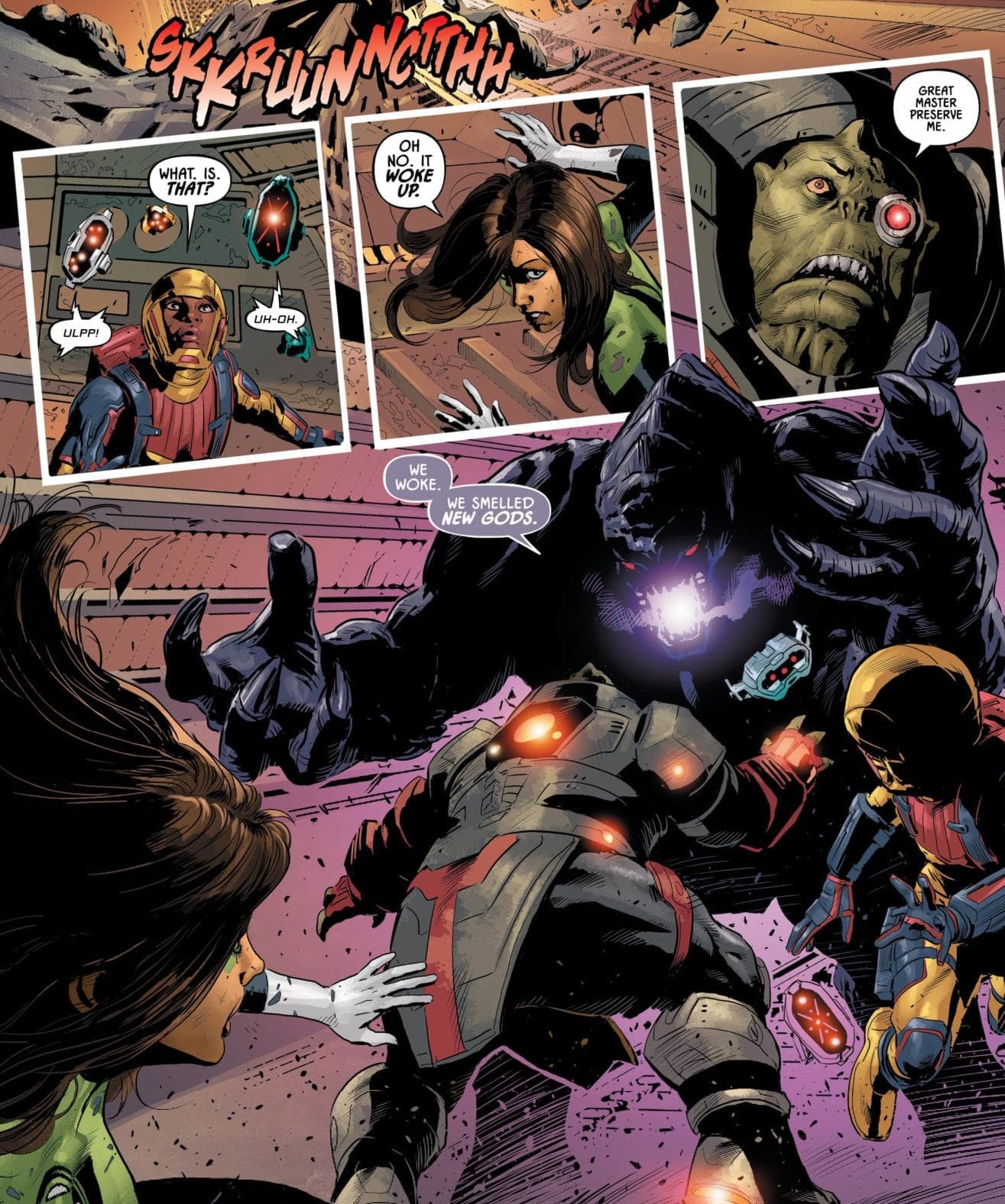 The Eskaton easily disposes of Xotar and attempts to destroy the Darkseid-controlled Cyborg. Fortunately, Cruz reminds the creature of it’s agreement to refrain from destroying anything else so that the League could take it to the overlord. Acknowledging the terms, the beast miraculously retreats into the Mother Box.

We see Cruz attempt to reach out to Cyborg in this moment of reprieve, but to no avail. The former League member reports back to Darkseid, leaving the team more vulnerable than ever. But seeing the Green Lantern’s heroism is a site to behold.

Cliff Richards’s penciling and ink work, along with Rain Beredo’s coloring, reflects the unending chaotic events in the issue’s narrative—and it’s enthralling. Readers are treated to extravagant bursts of energy via warm hues, which clash with the cool colors of the Old Gods’ unearthly beams of negative power. Yet despite these clashing colors, the forms of more solid figures are highly detailed, right down to the intricate lines of the Mother Box.

The lettering work from Andworld Design features a wide variety of font styles and dialogue box designs, which helps give each character their own flavor.

José Ladrönn’s main cover artwork places the viewer behind a menacing depiction of Darkseid. The grayscale background and flashes of bloodlike reds make it clear the villain is planning something horrible.

Skan’s variant cover features the major players in this issue: Cyborg, Cruz, and Darkseid. Each is locked in battle, representing the conflict at the Edge of the Known Universe.

JUSTICE LEAGUE ODYSSEY #18 moves the pieces in this game ever closer to their final destination: Darkseid. This exciting narrative gets better with every issue; we’re ready to see what challenges the mighty villain prepares for our heroes.

Are you ready to see Darkseid gain power again? Let us know in the comments below!

Review: It's All About Darkseid In JUSTICE LEAGUE ODYSSEY #18Dan Abnett's writing captures the fully embodied emotions of Cruz. We feel her despair and sorrow—and yet, a glimmer of hope shines through.