JUSTICE LEAGUE #53, available in comic book stores on Tuesday, September 15th, details the fallout of various Justice League members following the Dark Multiverse invasion. But the story places the main focus on Dick Grayson, who finds himself in the midst of the Batman Who Laughs’ new world. Fortunately, he has a League member and one unlikely ally to help him navigate the war zone.

This issue places its initial focus on an unlikely character—one who has recently had his memories lost, scrambled, and restored. Dick Grayson, said character, notes this as he laments the difficulty of dealing with an invasion on top of his trauma. But after detailing the memory of his first encounter with the Justice League, readers will find that the Boy Wonder is up for the challenges ahead. 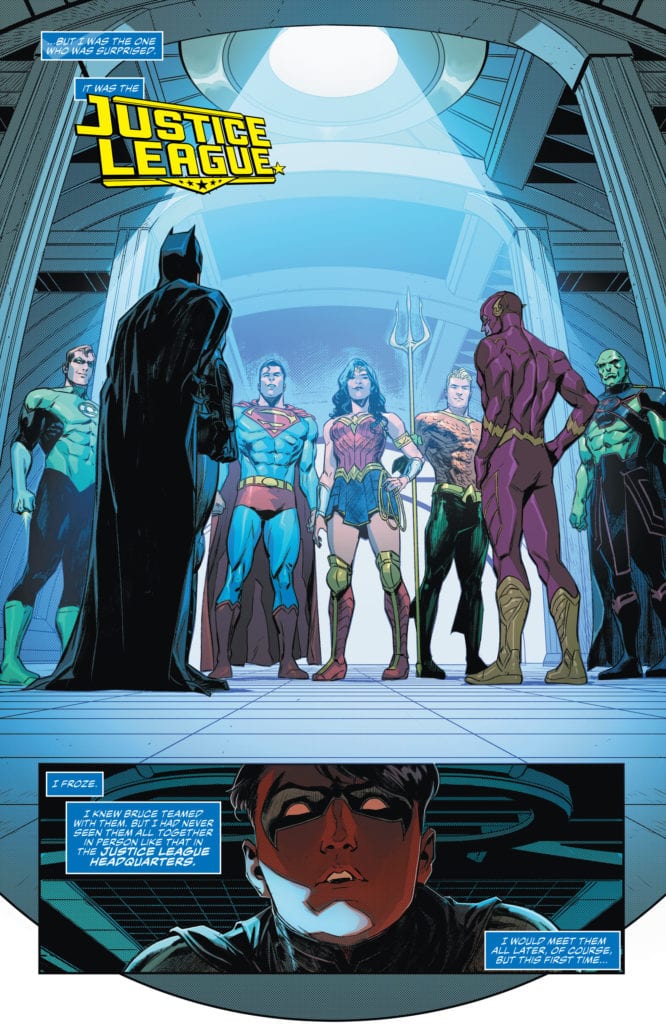 The story immediately breaks to the present, focusing on the full grown Grayson in the post-apocalyptic Dark Multiverse world. We found his attitude surprisingly uplifting given the state of affairs. He remember how he wanted to become a League member. And now that they’re all MIA, he draws inspiration from the fact that he’s one of the only heroes who can save them.

Writer Joshua Williamson conjures up a wild narrative full of adventure, fights, and unions between unlikely allies. It’s thrilling to see Grayson join up with Hawkgirl and Detective Chimp in this post-apocalyptic world of the Batman Who Laughs’ design.

The illustrations within this issue are the perfect pair with the written narrative. Xermanico’s penciling and ink work, combined with Romulo Fajardo Jr.’s coloring, gives readers two very different sets of panels—those before the invasion and those after. The former are more hopeful, full of color and sleek suit designs for the League members. But the latter detail the characters with sharp lines to reflect the harsh reality they’ve been forced into. And to top it all off, Tom Napolitano’s lettering blends onomatopoeia fonts in with the changing landscapes to reflect the chaos.

JUSTICE LEAGUE #53 brought on a whole set of new challenges for Grayson and the other heroes, each more interesting than the next.

Do you think Grayson will be considered a League member after these events? Let us know in the comments below!