Jessica Jones has finally hit Netflix and its first episode set the show’s haunting mood that sets itself apart from all other Marvel adaptations. “A.K.A Ladies Night” kicks off the series with our heroine Jessica Jones working on a case to find a missing girl. Her investigation leads her to a man from her past who has the ability to take control of people’s minds, The Purple Man. Jones is absolutely terrified to confront him due to their past relationship, but she knows that she’s going to have to in order to finally put an end to her PTSD.

And that is all of the story that can be said in order to keep this review spoiler free. From the get go, Jessica Jones is a phenomenal show, dripping with tense atmosphere, emotional conflict, and disturbing imagery. To talk anymore about its story would be doing you a disservice as it would be a distilled version of this show’s brilliance.

Much like Marvel’s other Netflix series, Daredevil, Jessica Jones has heavy shadows, creative angles, and a noir aesthetic that fits the dark content well. Unlike Daredevil the conflict is less external, the pacing is slow, and the action is minimal. Matt Murdock’s story focused on violence and its consequences when dealing with crime. Jessica Jones is focusing more on the internal struggles of trauma and deciphering the ramifications that come with it. This allows Jessica Jones to be a slow burn; meaning we can focus on the emotional complexity of our main lead. 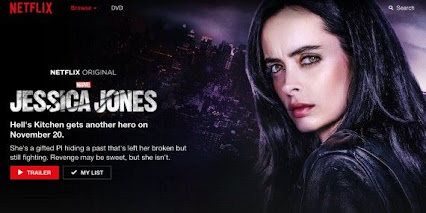 The acting is superb with Kristen Ritter perfectly nailing down the sardonic, tough as nails Jessica Jones. Carrie Anne-Moss plays a mysterious, and slick Jeryn Hogarth, Rachael Taylor is a caring Patricia Walker, and Mike Colter shines as future Defender Luke Cage. But, David Tennant steals the show as the terrifying, Purple Man. He’s barely in the episode, and pretty much only through flashback, but he leaves a haunting impression of what’s to come. His soft accent is somehow both soothing, and strong at the same time.

The show is very mature, full of realistic sex scenes, excessive drinking, and even some nudity. So this is definitely not for younger audiences. And while the narrative is very strong, at times it does feel a little scattered, but that could just be setting up the mystery element of the show. Keeping the audience in the dark about certain aspects of it keeps us coming back for more.

Overall while it is a much slower show than Daredevil, Jessica Jones shows a darker side to the world of the MCU, and we’re excited to call of work in order to binge watch the series. Check Monkeys Fighting Robots later this week for a full season recap. And let us know in the comics what you guys think of the series?