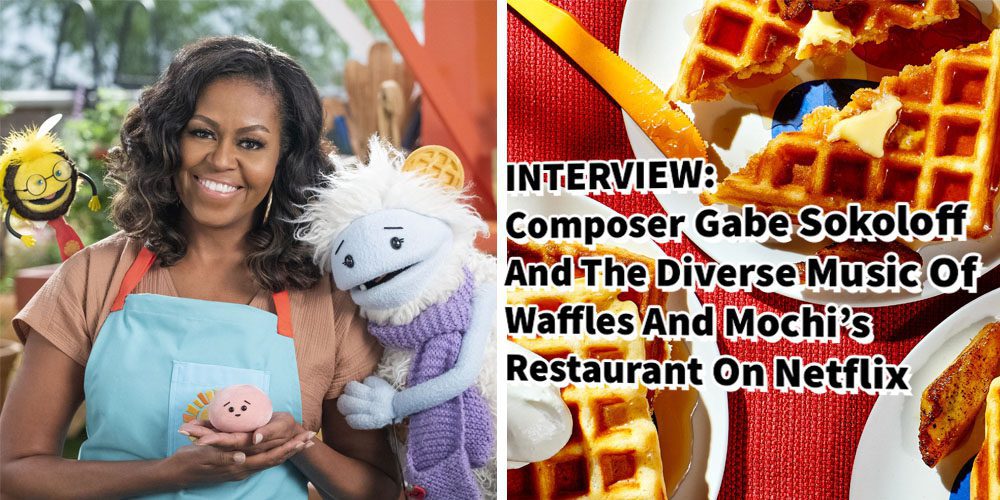 The series follows Waffles, a powder-white, furry fox-like creature with waffles for ears. Waffles’ partner in the fun-filled mischief is Mochi, a palm-sized creature inspired by the Japanese food. Waffles does most of the talking, and Mochi replies with wordless sounds. The pair come from the “land of frozen foods” and will stop at nothing to work at a neighborhood grocery store in New York. Each of the six episodes focuses on an ingredient that takes Waffles and Mochi out into the neighborhood, where they meet the likes of Michelle Obama.

PopAxiom spoke with Gabe Sokoloff about becoming a composer and creating the diverse soundscape of Waffles and Mochi’s Restaurant.

Gabe’s musical life began with “piano lessons as a kid,” but he admits that he “never took it too far.” But his dad was an amateur musician. “So we always had some recording gear around the house for basic multi-track recording.”

“I was a late bloomer,” he says. “I think part way through college; I started to entertain the idea that I could do it professionally. I started playing catchup in college, taking courses in my senior year, but I grew into it fast.”

Gabe moved out to Los Angeles “… without a clear plan except for pursuing music. I met all these kids with many connections and all the new gear. It gave me this feeling of being behind, but it lit a fire under me.”

“I lucked into a part-time gig with BT,” pioneering electronic musician Brian Transeau. “I also had a job doing audio editing at a commercial house. I did that for several years, working my way up to a staff composer. I loved it … it was my first job composing, and I was delighted in the variety of styles and work I was doing.”

With experience under his belt, Gabe “… started thinking about expanding into other realms. I did some pop music work. I’d written funny songs for a state farm radio campaign. Someone I knew sent that to the people behind JibJab, the e-card company.”

“It happens that those guys decided to create a television kids’ program,” he continues. “It had always been their dream. They had a universe of characters called the StoryBots. I contributed music to it, including the theme song. That became my entry into kids and family television. I also met a lot of Netflix people that way.” 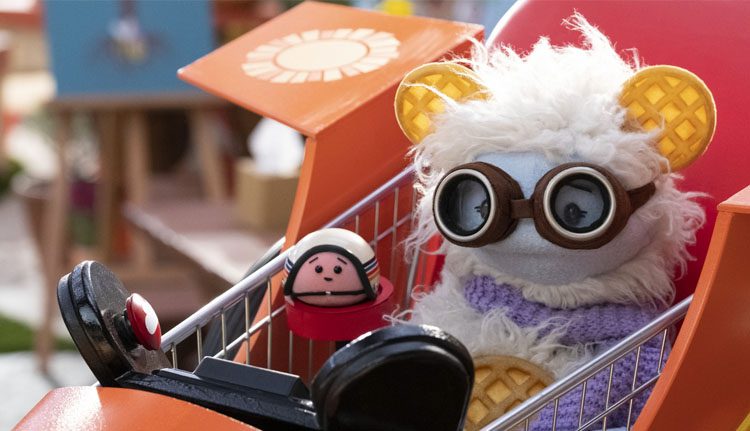 Gabe’s connection to Waffles and Mochi began with an audition when producers sought a new flavor and approach to the series’ music. “I brought my style to audition. I put my music into a couple of clips from the upcoming season. The clips had a similarity between them that had the signature of the show’s dramatic arc. Each clip had emergencies that weren’t emergencies. These high-stakes situations that were silly.”

“I approached the audition and the whole season with a tonal mix that’s 90 percent panic and frenzy in those moments,” he explains, “blunted with some musical nods to how ridiculous it is. I put some orchestral drama but elements that were completely out of place. For example, one had a bebop trumpet part running into this orchestral piece.”

Gabe was on a weekly schedule while putting together Mochi and Waffles. “It was a lot of work. The creators wanted something lively and animate, and the music had to do its part. We talked a lot about embracing contrast … keeping it energized. It went smoothly thanks to all the feedback I got that was articulated and targeted.”

“One of the initial challenges with the project was knowing how varied the music had to be and the constant change and contrast they wanted in the sound,” he explains. “I thought about maintaining coherence, so it feels like Waffles and Mochi’s restaurant. That it all belongs to the same world.”

Gabe accomplished tying in the diverse music “by honing in on a few instruments and re-contextualizing them cue to cue. For instance, many of the cues contained trumpets; sometimes it was bebop trumpet, sometimes it was mariachi, and sometimes it was orchestral. Decisions like that kept a strand of unity that gave coherence but allowed for diversity of sound. That is an insight I’ll carry with me moving forward.”

“I’m a huge Stephen Sondheim acolyte. I feel like his work, musically, lyrically, it’s influenced my process in every realm,” he says without a second thought while adding a second, related influence. “Most of the classic renditions of his musicals, the orchestrations are done by Jonathan Tunick, who’s masterful. So orchestration-wise, I’m influenced by him.”

Gabe loves Alexandre Desplat and John Williams “though not so much his more famous work but the more incidental cues. I love electronic music like Jon Hopkins. I love what he does with sound. He inspires me on an abstract level.”

“I’d be interested in contributing to the realm of adult animation,” responding to what’s on his project wish list. “Something for teenagers and up is something I haven’t touched yet. So a project in that realm would be exciting.”

What’s coming next for Gabe? “I’ve written a musical with my brother. It’s called Enjoy the Ride. It’s a vaguely political comedy about a fictional account of how repressive dictators acquire their armored vehicles.”

Thanks to Gabe Sokoloff and Rhapsody PR
for making this interview possible.