IRON MAN #3, available from Marvel Comics on November 11th, finds Tony Stark spiraling into deeper levels of despair, struggling to define himself as a hero, and finally meeting this series’ big bad. Written by Christopher Cantwell, this issue continues the existential angst of Iron Man #1 and Iron Man #2 before giving Stark a cold shock of superhero reality.

Once again, Alex Ross delivers a gorgeous cover. Iron Man flies high against the backdrop of the cityscape to escape a fiery death. It’s an exciting and gorgeous cover.

The overarching theme that comes through when reading Cantwell’s story so far is, “Tony Stark can’t catch a break.” He’s continually jumped by a cavalcade of serious and semi-serious villains from the Iron Rogue’s Gallery, which has potential as a build-up to Korvac’s reveal in the final pages. However, Cantwell takes it further. 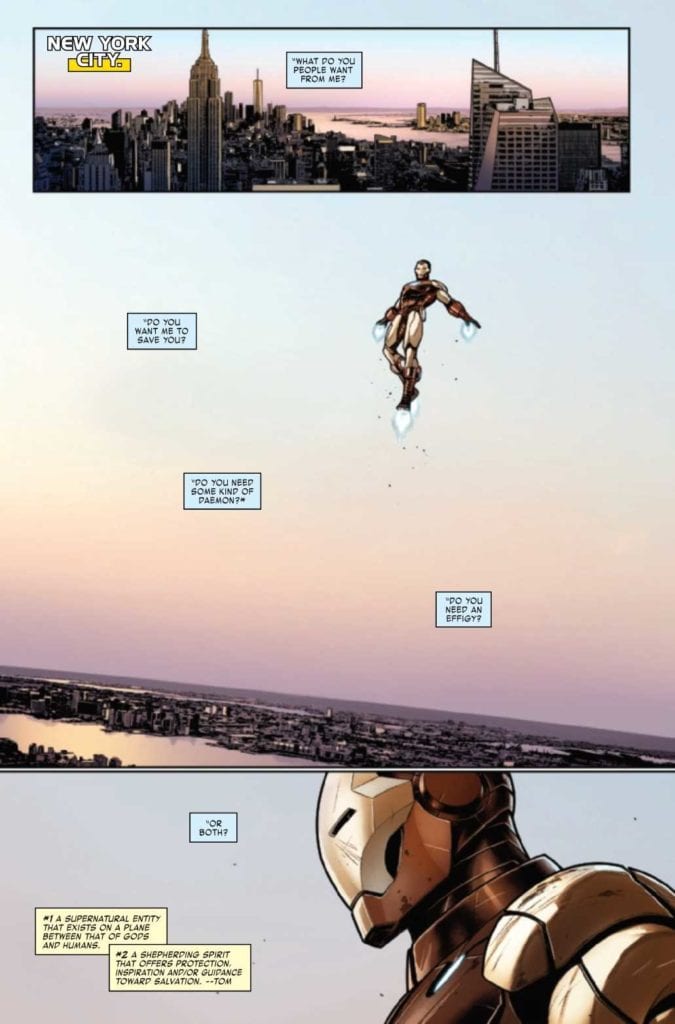 Not only does Iron Man get beat up by returning villains, but he gets roasted by the civilians he saves, and once again, from Hellcat. Cantwell is hammering it down with a sledgehammer that no matter how much Iron Man does to save people or how badly he gets injured in the process of said saving, everyone is dogmatically disappointed and annoyed with Iron Man. Any hint of hero worship or gratitude for Iron Man’s heroics is stripped away with a little extra salt for the wound. 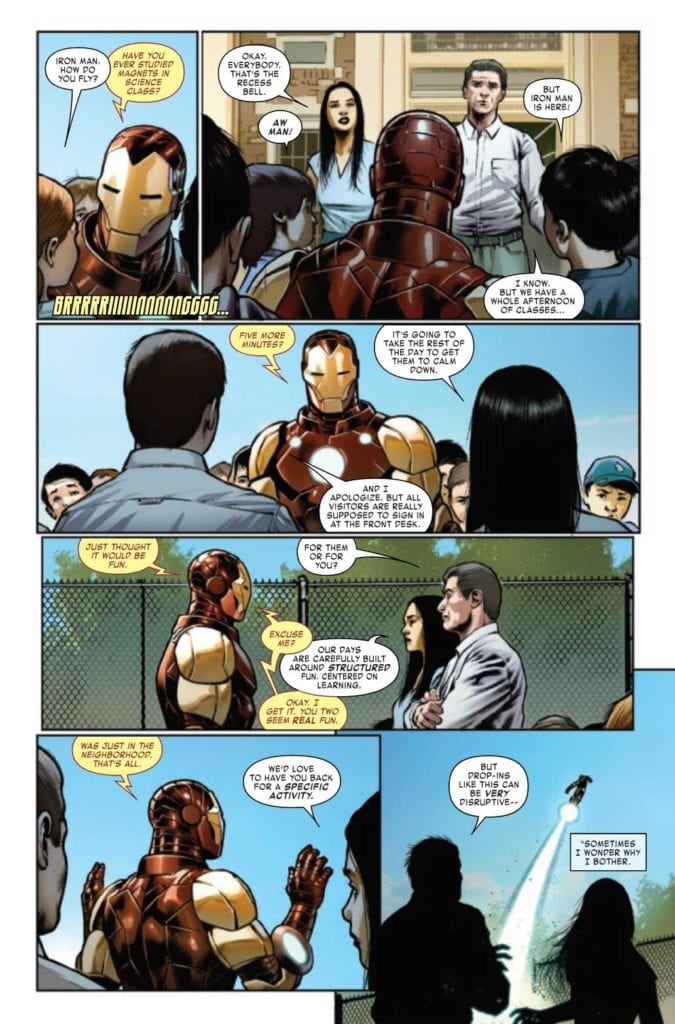 To be fair, this is structurally much better than the previous issue, but Stark’s constant self-doubt and the world’s non-stop Iron Man bashing make the story depressing. Readers want someone or something to root for, but here, even Iron Man doesn’t want to root for himself.

CAFU’s art is the standout for this series. Similar enough to Alex Ross’ hyper-realistic style but distinctive enough to be picked out on sight, CAFU creates a visual story that’s good enough for live-action without removing any of the fantastical elements you can only pull off in a comic.

Where CAFU’s art really shines is in angle choices between mundane conversation and action scenes. When characters are talking in everyday surroundings, the panel angles are flat, straight, and unremarkable. When Iron Man is called into action, CAFU chooses unique angles to amplify the sense of movement and action. Again, CAFU’s art saves this series.

Frank D’Amata’s color work compliments CAFU nicely with a matte veneer covering all the surroundings and characters, giving them a dreamy glow that adds a fantasy feel to the art. The hues are rich and deep, and every panel looks like a museum-quality painting.

VC’s Joe Caramagna lays down some excellent lettering in this issue. There’s quite a lot of wordy conversations going on, and so Caramagna keeps the dialog well-integrated into the art and easy to read. As noted in the previous issue, Caramagna makes a visually pleasing choice to match the sound effect border colors to the power source, complimenting the art in an almost symmetrical way that looks great in the panel.

IRON MAN #3, available from Marvel Comics on November 11th, takes Iron Man further down the rabbit hole of self-loathing before dealing with the biggest blow of all from the series’ main villain. The art is gorgeous on all fronts, but the story’s constant Iron Man bashing borders on sadistic. Read at your own risk.

IRON MAN #3 takes Iron Man further down the rabbit hole of self-loathing before dealing with the biggest blow of all from the series' main villain. The art is gorgeous on all fronts, but the story's constant Iron Man bashing borders on sadistic. Read at your own risk.Review: IRON MAN #3 Spirals Into Depression