IRON MAN #1, available from Marvel Comics on September 16th, finds Tony Stark trying to give up his business ties, his dependencies on technology, and everything that forms the public image of Tony Stark in favor of that age-old question: “Who am I?” Written by Christopher Cantwell, this is a personal and introspective approach to Iron Man that just might elevate the character to a more mature level.

It’s Alex Ross. If you love Alex Ross’ work, you’ll love this cover. Iron Man is dead smack in the middle of a melee assault against a host of Iron Man villains in all their photo-realistic glory. The big news with this cover and the series is a spiffy new suit redesign by Ross that looks original and modern but with a slightly retro feel.

Cantwell adds a touch of the modern social climate in this “re-calibration” issue. Tony is aggressively casting off the trappings of the life he built for himself. The Malibu mansions. The billion-dollar corporations. The jet-setting lifestyle. And he is rediscovering who is the man inside the heart of the machine. There are multiple layers of depth here, and Cantwell is asking whether Tony Stark is Iron Man and all the mythology that goes with it, because of all he’s done over the years or is Tony Stark a separate and distinct persona that’s been neglected for too long. Where does the myth end and the man begin?

This is thought-provoking stuff, and the questions Cantwell is asking through Tony Stark are increasingly common in a world dominated by electronic gadgets and social media. In a fairly amusing running bit, Tony posts innocent or thoughtful posts online and is viciously roasted at every turn. An all too familiar scene with celebrities online, and to quote the phrase: “It’s funny because it’s true.” 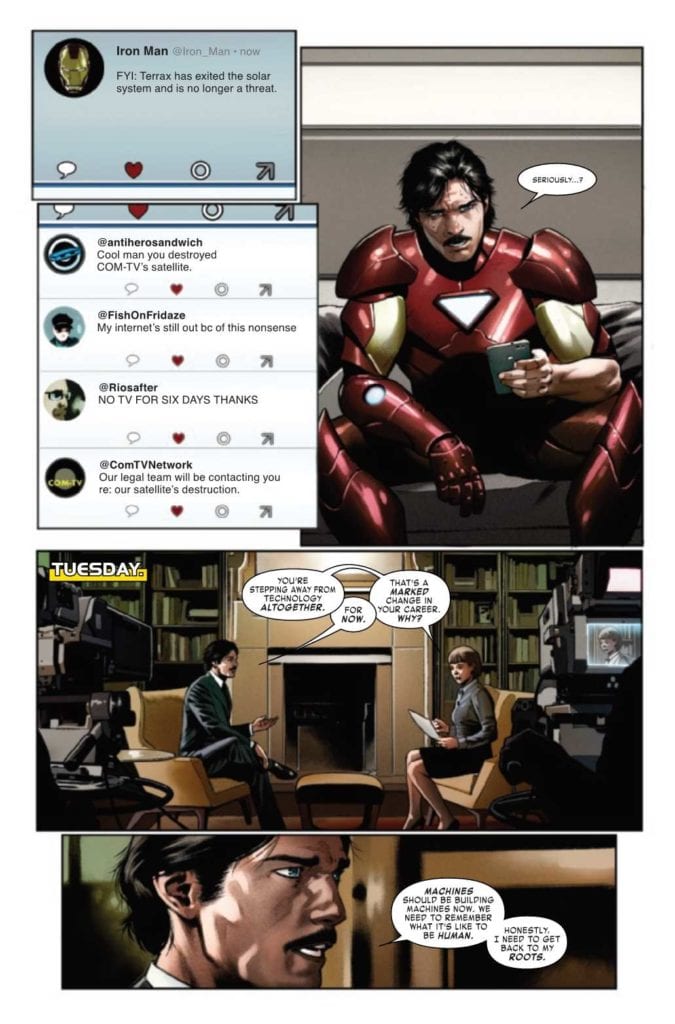 Toward the end of the issue, Iron Man and Hellcat encounter a petty crime in progress. The end result hints at a more serious villain in Tony’s future. This Iron Man is new, different, and chock full of potential.

CAFU’s artwork is an excellent match for the tone of this issue. Despite the action ending, this is very much a character piece, and CAFU’s style focuses heavily on photo-realistic characters that convey emotions through highly detailed facial expressions. You can empathize with the disappointment in Tony’s eyes when he loses a street race. Tony’s frustration is palpable through his slumping posture after he’s blamed for the destruction of a priceless book. Even the little odd touches, like throwing a Dinner party while wearing bunny slippers, amplify Tony as a real person. Flawed, but very human.

That said, the action sequences are still crackling with energy (literally). CAFU really captures the details equally well in the simple conversations and the fight scenes to bring this book up to film-level quality. This is a beautiful book by CAMU. 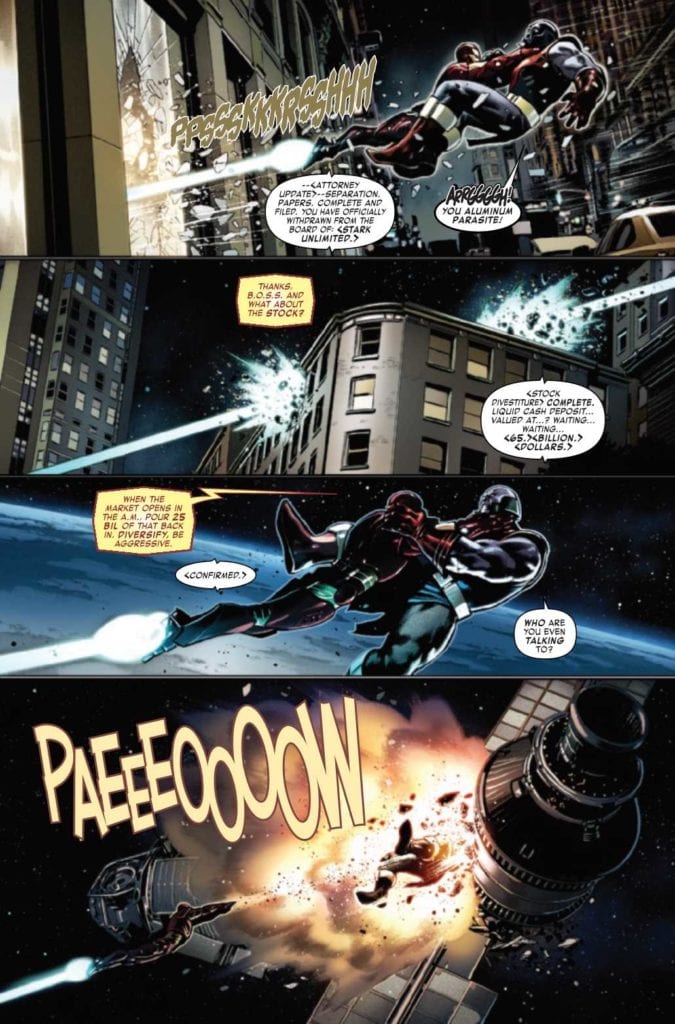 Frank D’Armata’s colors take CAMU’s work and punches it up several more notches. The color shading gives every character visual depth and texture. When Tony is serious or surprised, the coloring on his face darkens and lightens through shadows to add more drama to the moment captured in the panel. The drama sells this issue, and D’Aramata uses color to maximum dramatic effect. 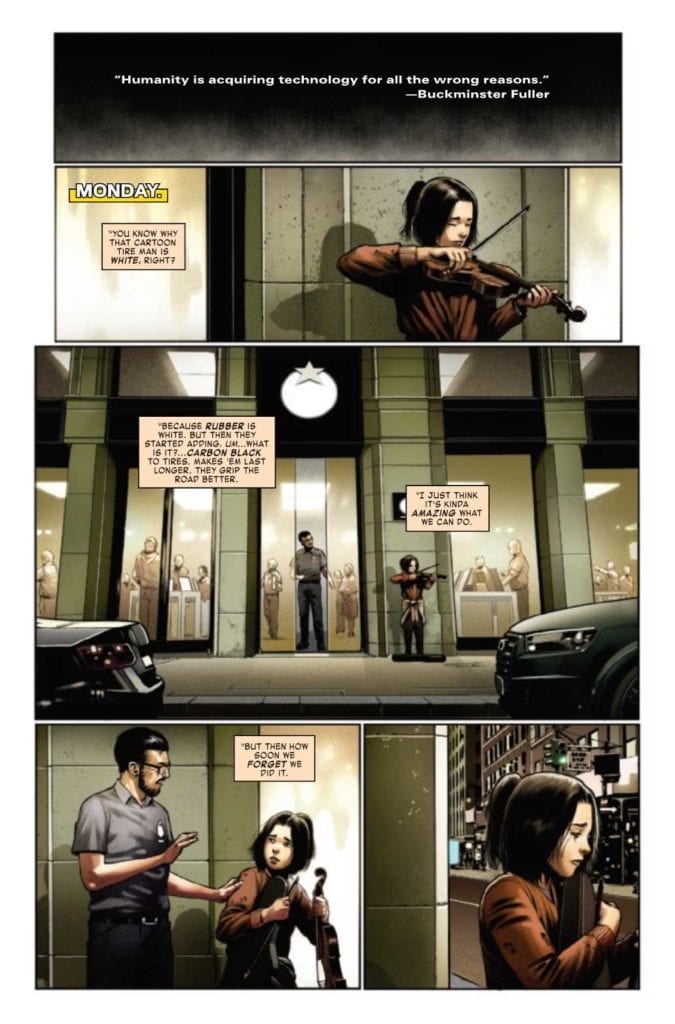 For an issue that’s themed around getting away from machinery, there’s more than enough electronic voices and AI to go around. VC’s Joe Caramagna handles the lettering in stride by giving every non-human voice a distinctive look with their own visual cues for a hint of personality. It’s not technically necessary for the story, but it adds to the story in a way that makes the reading more visually interesting—nice work by Caramagna.

IRON MAN #1, available from Marvel Comics on September 16th, is a powerful departure from the esoteric “imagination armor” of the recent run and puts Tony Stark on a path to rediscovery. The artwork is gorgeous, and the writing hits a symphony of emotional notes. This first issue is highly recommended.

IRON MAN #1 is a powerful departure from the esoteric "imagination armor" of the recent run, and puts Tony Stark on a path to rediscovery. The artwork is gorgeous and the writing hits a symphony of emotional notes. This first issue is highly recommended.Review: IRON MAN #1 Enters A Mid-Life Crisis For Tony Stark