Review: IRON FIST: HEART OF THE DRAGON #6 Displays The Art Of Sacrifice

IRON FIST: HEART OF THE DRAGON #6, available in comic book stores on Wednesday, June 2nd, concludes the action-packed six-part story from Larry Hama, Dave Wachter, Neeraj Menon and VC’s Travis Lanham. Danny Rand, Luke Cage, Okoye, Pei and the rest of the team prepare for a final stand against the evil Hierophant. In the process, readers will find that although sacrifices must be made, there’s always the possibility that something greater will be gained.

In order to assemble enough power to face the Hierophant, the group unleashes their attack upon the Ghost Dragon of the Hidden City. 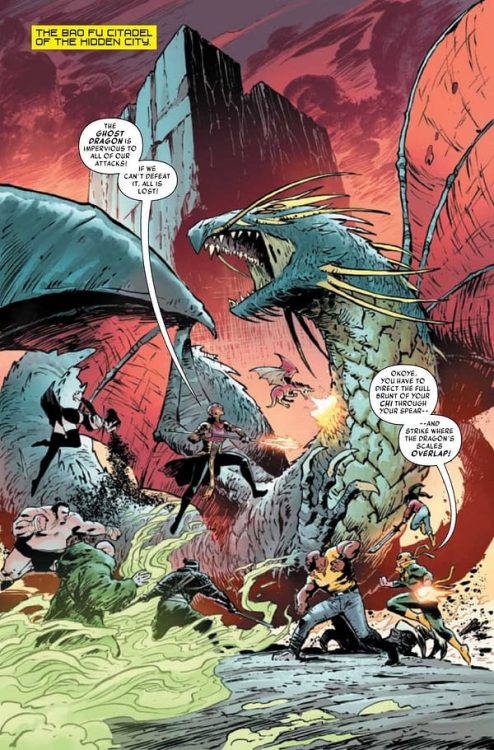 In a single moment, Pei’s life crumbles. The pressing eyes of Danny and Okoye tell her what she already knows—Gork must sacrifice his own heart in order to defeat the monstrous Ghost Dragon. 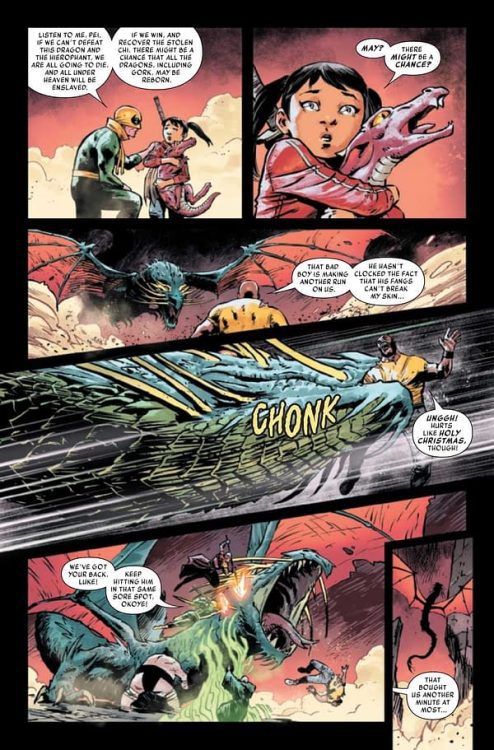 Larry Hama’s writing is top-notch in these moments. Danny’s attempts to speak to Pei’s worries don’t seem to get through. It’s not until Okoye steps in, speaking with compassion and authority, that the young warrior starts to see hope for her dragon friend.

The culmination of Gork’s impending sacrifice and the unparalleled bravery of our protagonists makes this issue one for the ages.

Wachter’s penciling and ink work brilliantly details impressive action scenes; each of our heroes showcases their unique fighting styles from panel to panel. The backdrops of these figures are brought to life via Menon’s coloring, which offers bright yellow chi and dark red fires. We also loved how Lanham’s lettering adds flavor to each character via varied font styles and shapes of the word balloons. Gork’s “SKREEEEE!” is priceless.

IRON FIST: HEART OF THE DRAGON #6 is full of heart and unexpected outcomes. This rollercoaster of an issue wraps up this miniseries beautifully while leaving plenty of room for brand new adventures.

Did you enjoy Danny’s team-up with Okoye throughout this saga? Let us know in the comments below!