From Audible series creator and screenwriter Travis Beacham (Pacific Rim, Clash Of The Titans) and artist Stephen Green (Sea Of Stars, Hellboy) comes a unique and entertaining blend of apocalyptic survival in the prequel one-shot Impact Winter #1. Featuring colors by Matt Hollingsworth and lettering from Andworld Design, this double-sized one-shot provides great backstory, excellent pacing, and compelling lore to help flesh out the world and cast of characters from the hit Audible series. Featuring a stellar script and fantastic visuals, this is a great start for fans of horror and vampire stories needing something new, and a must-read for fans of the original Audible story.

“It’s been one year since a comet hit Earth and blotted out the sun. Now, the world is a dark, cold landscape ruled by vampires.
In the British countryside, a band of survivors has formed a resistance in the fallout shelter of a medieval castle. Among them is Darcy, a young, headstrong fighter waiting for the chance to prove she can be on the front lines. But when that opportunity comes, Darcy will come face to face with the true horrors of this new world.” 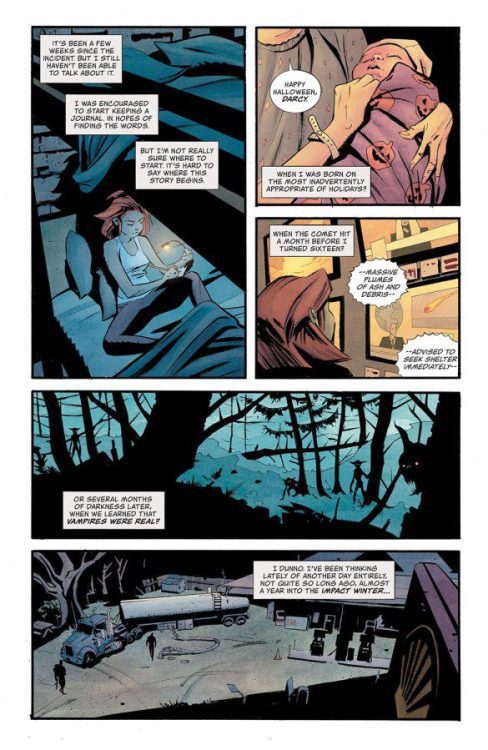 Taking place some time before the Audible series, Impact Winter #1 works great as both a jumping on point for newcomers and strong backstory for current fans. Travis Beacham’s script has the narrative feeling of an audiobook, but restrained enough to let the visual storytelling of the comics medium take the lead. The double-sized page count is well-utilized in introducing a young Darcy and the post-apocalyptic world she has to inhabit. All of the events leading up to this point, with Darcy and other survivor’s hiding in a castle against the night hordes of vampires, are handled with a compelling mix of character interaction and overhead narration. Beacham’s script handles exposition by way of Darcy’s journal, which functions as the comic’s narration. He handles this element particularly well, as the writing feels natural and like actual dialogue. As such, the exposition pairs well with the actual in-story dialogue, which is equally well-written. Every character has their own unique voice, making the story have more stakes and its world more lived-in. The plot itself, like most vampire stories in recent years, is a sort of genre-salad. There are elements of 30 Days Of Night, The Road, The Witcher, and even Rob Bowman’s 2002 dragon-apocalypse film Reign Of Fire to be found in this story’s potential influences. This is in no way a negative criticism, as this sort of influence-blending is precisely what makes this one-shot so entertaining, and makes for a fantastic backstory/entry point into Beacham’s vampire apocalypse. 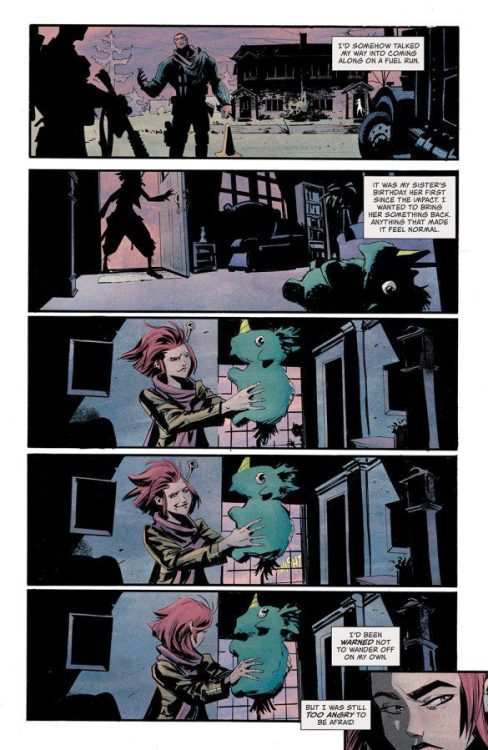 With an influx of Vampire and post-apocalyptic comics over the last few years, making one of these stories stick out largely comes down to the art. Fortunately, Impact Winter #1 has Stephen Green on hand to craft this one-shot’s visual experience. Green’s wholly unique character animations and design language help craft this world into something that stands out to readers while still serving the overall story Beacham has created. Every cast member has a distinct look, with outstanding acting pulling the readers into the lives of these people – especially Darcy. Green’s careful eye for design and composition help keep this 44-page comic moving along at a tense yet brisk pace. The action hits hard with well-choreographed moments of excitement that melt away into scenes of quiet intensity and contemplation. The blending of modern appliances and weaponry with that of the Middle Ages looks seamless in this one-shot – likely a holdover from Green’s work on Hellboy.

This comic’s aesthetic is tied together by the colors of the massively talented Matt Hollingsworth. This new world darkened by ash and clouds is perfectly fleshed out by his heavy shadows and tones. His lighting work is especially impressive, as every page is rendered with pale moonlight or candlelight. There’s one sequence where Darcy and another character are having a conversation in a dark room lit only by a hall light through a partially closed door. The accuracy to which the lighting element of that scene is particularly stellar. Overall, this is a beautifully dark and exceptionally well-animated horror comic. 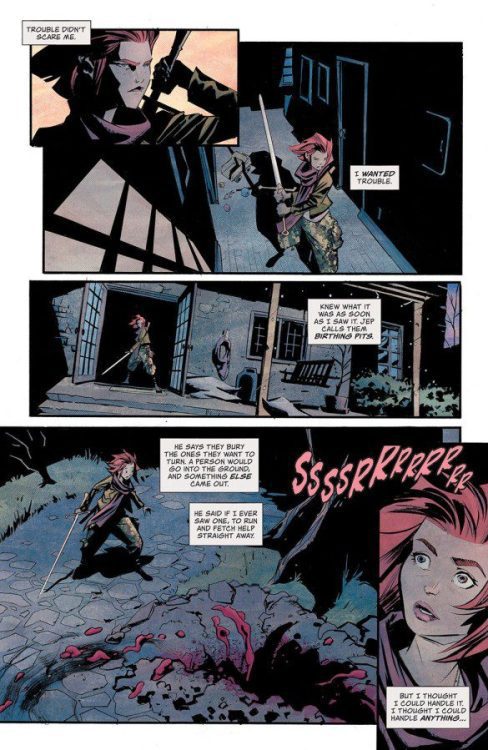 Impact Winter #1 is a highly engaging and entertaining one-shot prequel comic. Travis Beacham’s script for this double-sized issue offers perfect pacing and an excellent blend of naturalistic, expository narration, great dialogue, and solid characterization that makes for a great starting point for his Audible story. The visuals from Stephen Green and Matt Hollingsworth are brilliantly animated, fittingly dark, and well-composed for an atmospheric and intense reading experience. Be sure to grab this one-shot when it hits stands on July 13th!

A well-paced and relatively inventive take on vampire stories, Impact Winter #1 is an exciting start to this post-apocalyptic tale of survival and monster-slaying.Review: IMPACT WINTER #1 - Reign of Fire Meets 30 Days Of Night