The corruption of the quiet council is exposed

One of the most intriguing things about this new era of X-Men has been the Quiet Council. While they’ve always played a role in every book, as readers we’ve never been able to see everything that they are up to. With Immortal X-Men #1 Kieron Gillen makes his triumphant return to the world of X-Men. Joined by Lucas Werneck on pencils, David Curiel on colors and Clayton Cowles on letters, we get an explosive first issue that won’t be forgotten.

Kieron Gillen uses Mr. Sinister as our narrator for this first issue. Gillen has written Mr. Sinister before during his stint on Uncanny X-Men. Gillen’s voice for Sinister has not changed in Immortal X-Men. He’s cocky, hilarious, dangerous and untrustworthy. Gillen sows the seeds of discord throughout the council as they disagree on which new member to add to fill a vacancy. As a reader, we get to see all the backstabbing going on in the political world of mutants. One of the most fun parts of the issue is when potential candidates apply for the council seat. Gillen shows us why they feel they would be a good fit, and we also get the council members discussing why they wouldn’t. As far as first issues go, Gillen knocked this one out of the ballpark. 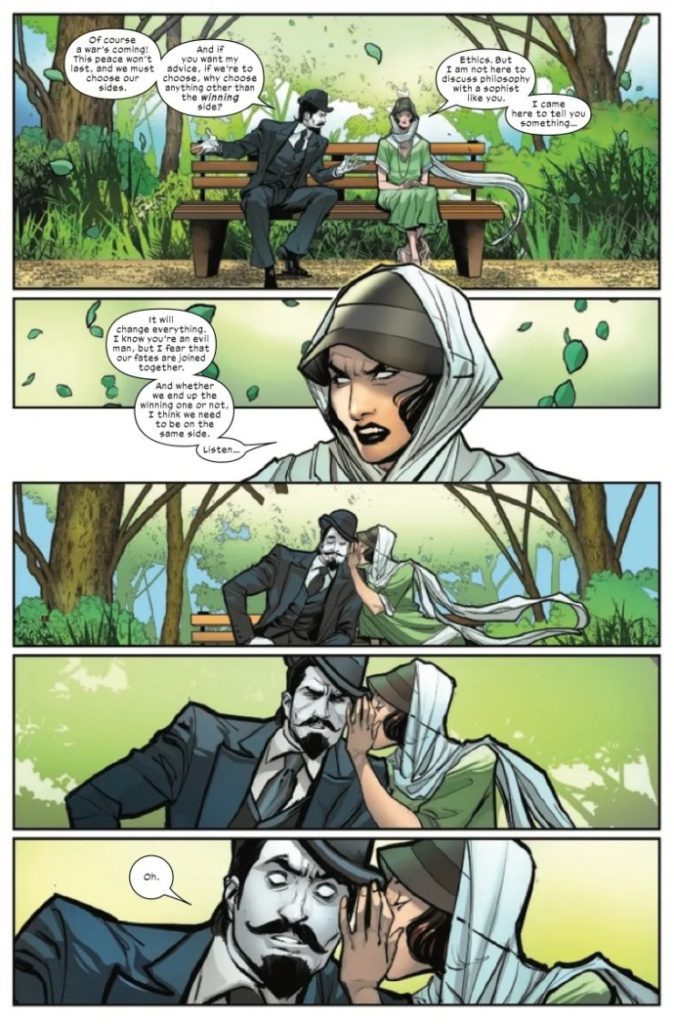 Lucas Werneck’s pencils look great this issue. The beginning of the issue takes place in 1919. Werneck draws Paris gorgeously as Sinister sits next to a blue fountain. Werneck also draws Sinister cocky as he listens to the council argue over who gets the remaining spot. Werneck has him slumped in his chair with a crooked smile on his face. The background of Krakoa also looks beautiful as trees have sunlight shining in through them. Werneck’s pencils make it easy to go from panel to panel as the transitions are smooth. Pages where the council vote, Werneck goes through each member. Your eyes flow from mutant to mutant as you see them and it works really well on the page.

The colors by David Curiel are fantastic as well. During the council meeting, Curiel uses a light blue for the water in the background and some nice shading on the trees. This allows our eyes to focus on the mutants applying to be on the council. As the five bring a mutant back to life in Arbor Magna, Curiel uses a dark blue behind the characters. He offsets this with a vibrant orange and red as the mutant is reborn. These contrasting colors are gorgeous to look at and work perfectly together.

The letters by Clayton Cowles have a couple of stand out panels. Mr. Sinister, using fake outrage, yells “WHAT?!?!” during a council meeting. The text is large and goes the full length of his panel to show his outrage. This is a funny panel for readers and Cowles making the text large adds to the comedy. During a fight scene near the end of the issue, Cowles gives us a “BAMF” from Nightcrawler. The letters in the “BAMF” are staggered, which makes you feel the dynamism of the action. 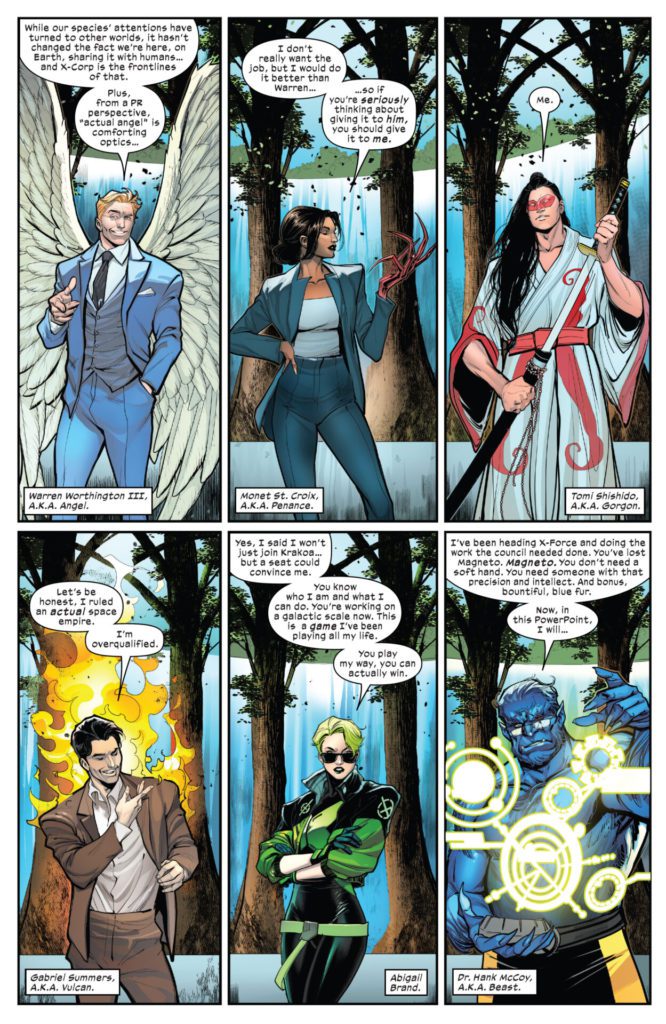 Immortal X-Men #1 is an exhilarating read. Kieron Gillen writes the cast flawlessly as he reunites with his favorite mutants. The art team delivers a great performance that will be sure to please fans. Immortal X-Men #1 is available from Marvel Comics at a comic shop near you.

With Mr. Sinister as the narrator, how can we not be entertained?Review: IMMORTAL X-MEN #1 Sets Up A Divided Council