Review: Get a Cosmic Master Class with THE HISTORY OF THE MARVEL UNIVERSE #1

With 80 years of continuity, reboots, alternate worlds, and conflicting origins in the can, the Marvel universe can get a little confusing. Parsing decades of established canon is intimidating, especially for new readers. Fortunately, The History of the Marvel Universe #1 is here to set the record straight.

The book is like what DC did with their History of the DC Universe book back in the 80s, which outlined the official post-Crisis DC canon. It establishes a firm outline of what is gospel within the Marvel comics multiverse.

The History of the Marvel Universe #1 is an abridged survey of everything from the pre-origins of the multiverse, to the early-Twentieth Century. The book outlines how the current multiverse came into existence on a varying scale. We begin at the macroscopic, cosmic level, and eventually dial-in on key figures in Marvel Comics history.

Releasing a book like this could be a great help for newcomers to the Marvel readership, many of whom tend to feel intimidated, or even put-off, by decades of complex canon and cosmology. It’s an interesting compendium for those new readers, and a vital resource for Marvel aficionados alike. Unfortunately, what it’s not—at least in this first issue—is a particularly compelling narrative.

The History of the Marvel Universe #1 reads like an outline, rather than a story. It lists out events as they occurred, with just a skeletal narrative tying it together involving Galactus and Frank Richards. The pair, the last surviving entities of the universe, provide a framing device for the story. Beyond that, it’s essentially CliffsNotes to the Marvel canon; so much so, in fact, that the book’s entire last third consists of annotations for cross-referencing key issues. As such, it’s difficult to judge it as a fully-constructed narrative.

It will be interesting to see what transpires in the next several issues. Will it foretell what’s coming in Marvel’s future? Will we see how the Marvel universe we all know ultimately meets its end…and what comes after that? It’s too early to really speculate on the scope of the story based on this issue alone. 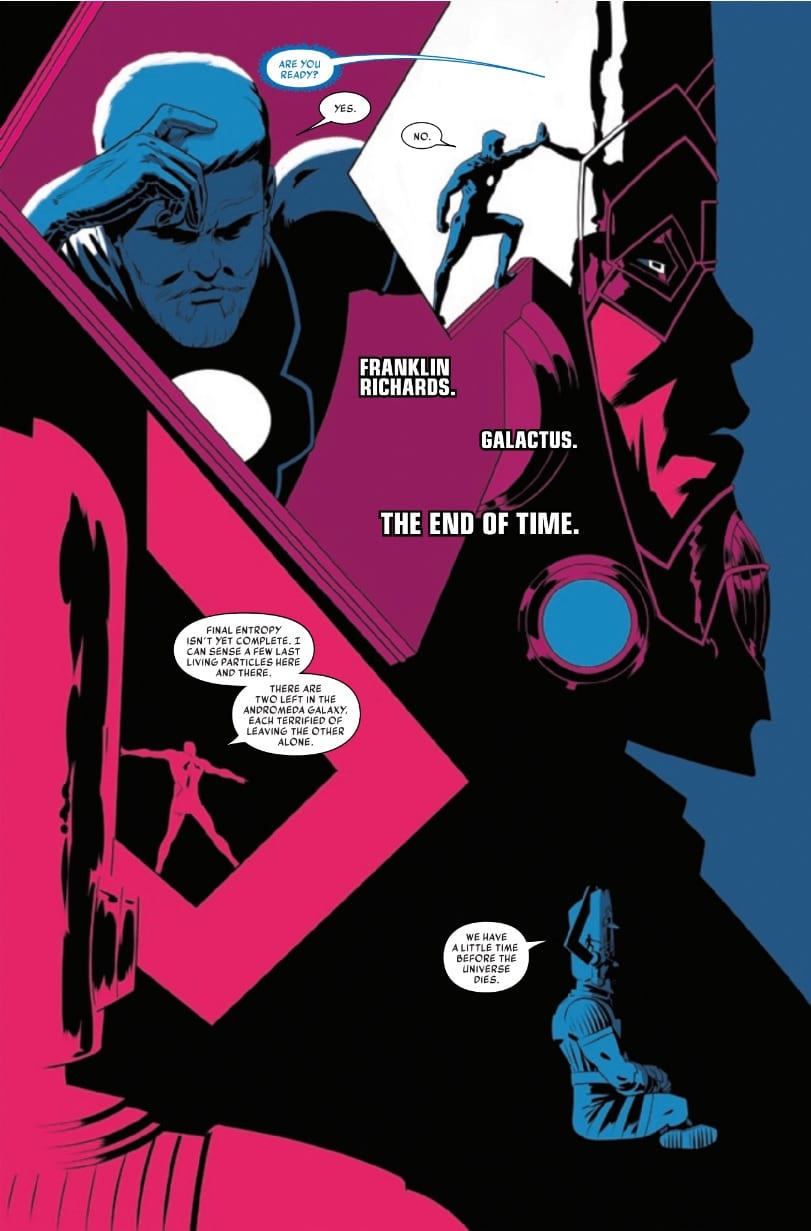 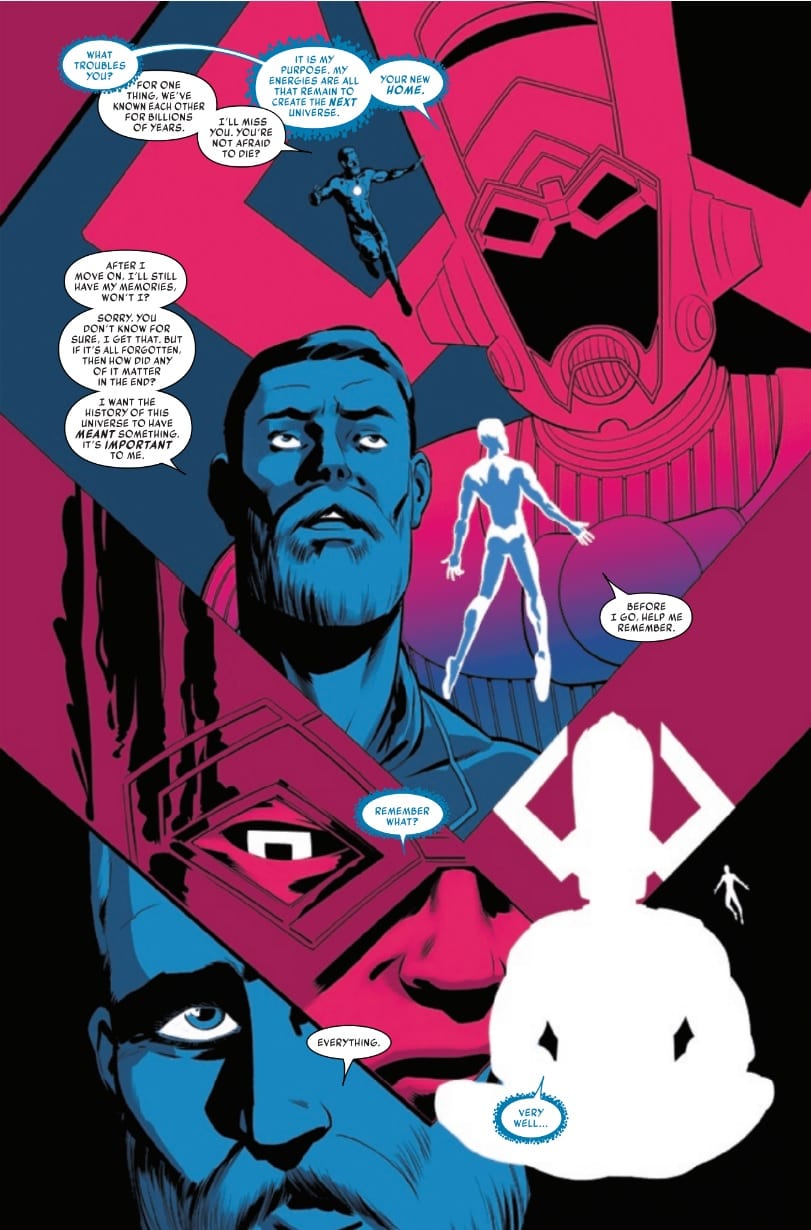 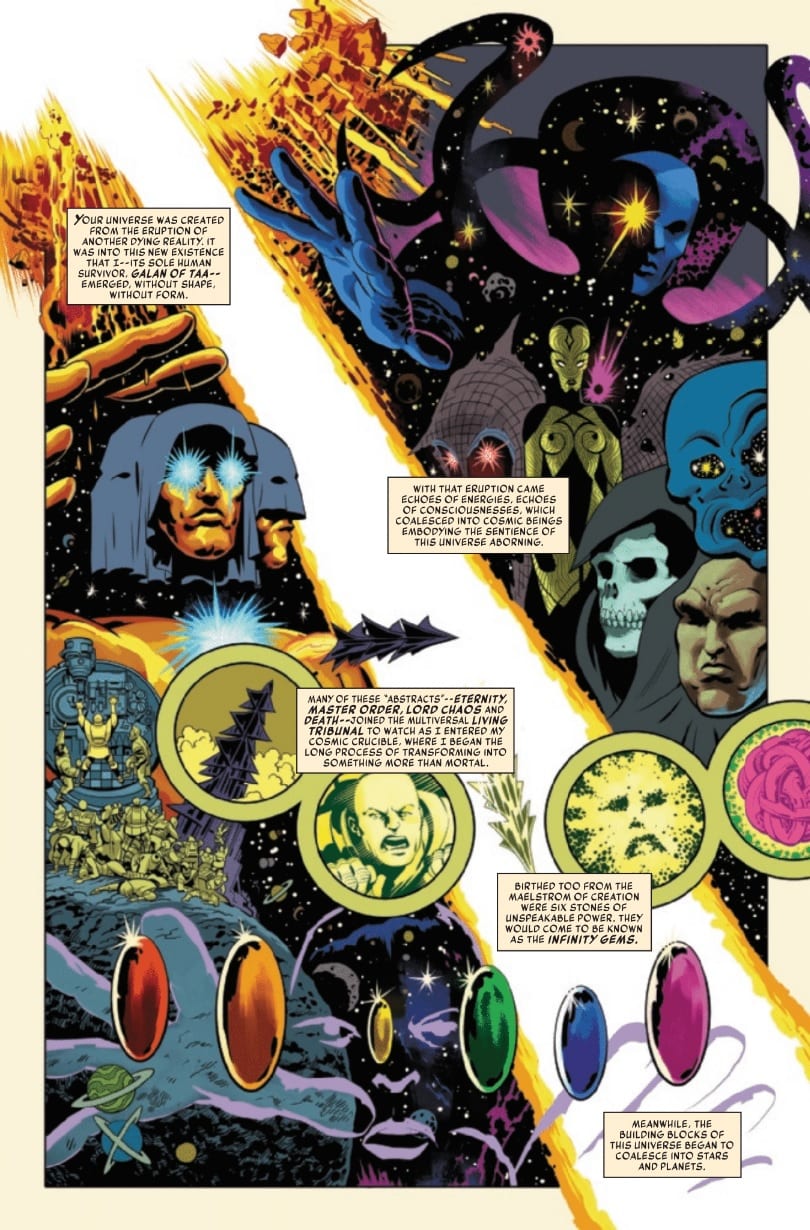 The artwork by Javier Rodriguez and Alvaro Lopez—the former on pencils and colors, the latter on ink—is one of the book’s strong points. The pair of artists provide a dreamy tapestry of images to illustrate Galactus’s outline of Marvel history and cosmology.

Early pages illustrating the formation of Earth and the cosmos flow borderless and shapeless from one into another. Later, The History of the Marvel Universe #1 becomes more firmly paneled as the Marvel cosmos grows and takes shape. It’s a clever device that achieves a nice visual effect along with the storytelling.

The illustrations, despite portraying a lot of contrasting images, maintain a sense of cohesion throughout. Between surreal space-scapes and illustrations of characters, the work still manages to feel uniform, which is a testament to the artists’ skills.

The color work is similarly brilliant. It’s vibrant and possesses a wide range of contrasts, but it manages to avoid overloading the reader’s eye. The colors and line work fit together to deliver a sublimely cohesive final presentation.

The History of the Marvel Universe #1 is a great quick reference guide, but it doesn’t offer much beyond that. I highly recommend Marvel fans pick this up for research and reference purposes. However, don’t expect a thrilling story out of it. Pick it up this Wednesday at your local comic book shop.

THE HISTORY OF THE MARVEL UNIVERSE #1 is hard to judge as a singular narrative. It's primarily a survey course examining the entire history of the Marvel cosmology from the viewpoint of that universe's final moments. It's not a super-compelling read, but I highly recommend it for Marvel fans of any stripe for reference and research purposes.Review: Get a Cosmic Master Class with THE HISTORY OF THE MARVEL UNIVERSE #1