After a revealing twist and Clark Kent’s epic speech in the last issue’s end, Heroes in Crisis #6 opts to take a slower, more meandering route than the previous chapter.

Much of the issue centers around three characters—Gnarrk, Wally, and Harley—and their experiences at Sanctuary before the massacre. Specifically, the images they choose to conjure up in The Chambers, and how they process them. We get background material, but only towards the issue’s last few pages does the story start moving forward.

It’s hard to surpass the last issue in terms of gravitas. However, King tries to match the emotional pitch by taking a deeper look at the source of individual characters’ traumas. Heroes in Crisis #6 is essentially a flashback, filling us in on the characters’ experiences at Sanctuary before the massacre.

King provides a sharply-introspective look at Gnarrk. He’s a man torn between two very different times, wrestling with the virtues and faults of each. He debates the merits of enlightenment philosophy, pondering whether it’s better to be free to live a “nasty, brutish, and short” life, or to be weighted-down with the chains of a more advanced society. With Wally, his repeated disappearances—and that of his family—take center stage. And of course, for Harley, The Joker is a key figure to her trauma.

Each character’s story is handled delicately and with great pathos, as we can expect from King. By the end of Heroes in Crisis #6, the flashbacks catch up to the moments the killings ensue. As teased on the cover, we finally discover the perpetrator behind the massacre in the book’s last few panels.

The deconstructions of these characters are beautiful and carry plenty of weight. But, as with previous issues, much of it is essentially tangential to the narrative. This can leave the reader feeling a bit cheated. Also, one worries how they can wrap this up cleanly with just three issues left until the run’s climax.

Mitch Gerads provides artwork for most of Heroes in Crisis #6, with Clay Mann drawing the first and last pages. 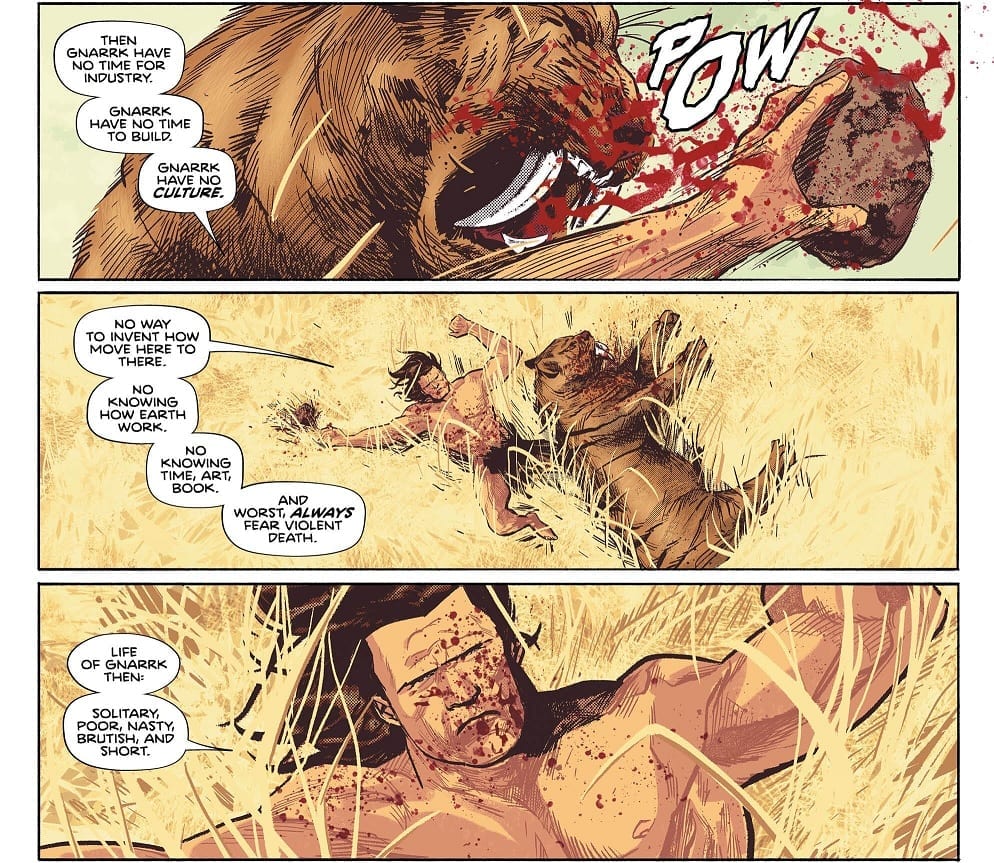 Gerads’s illustrations are beautiful as always. What really shines in this issue, though, is the powerhouse team of Gerads and King as a creative unit. The way Gerads contrasts facial expressions and composition within a panel to complement or contrast with King’s dialogue is superb. He demonstrates exceptional skill at letting moments hang, allowing readers to feel the emotional weight.

Gerads gets assistance on colorwork in Heroes in Crisis #6 from Tomeu Morey. The colors are vibrant, yet retain a soft, dreamy quality, perfectly complementing the artwork. The final product comes together with brilliant effect. Each panel is like a painting, and it’s a joy to look at.

Heroes in Crisis #6 is heavy on mood and emotion, with absolutely brilliant artwork. But, while it provides backstory and pathos, only the last few pages actually advance the narrative.

Review: HEROES IN CRISIS #6 Reveals Who Attacked SanctuaryWe get plenty of emotion, introspection, and character exploration in HEROES IN CRISIS #6, plus beautiful artwork courtesy of Mitch Gerads. That said, most of the issue is supplementary material to the core narrative, save for the last few pages.